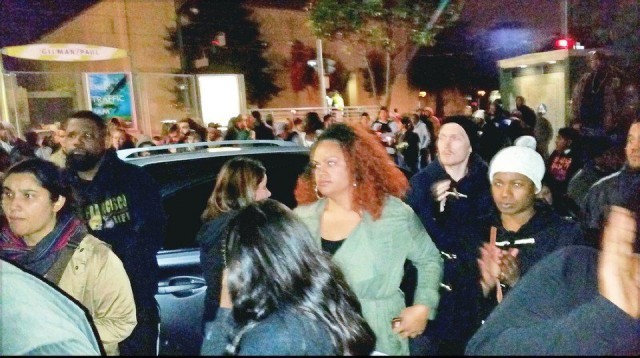 Oakland, Calif. — The Black community of Bayview Hunter’s Point in San Francisco has demonstrated its outrage at the firing-squad execution of 26-year-old Mario Woods, another African-American victim of wanton police terror. Three eyewitness videos show police officers surrounding Woods before he was shot by at least five of them on Dec. 2.

Since the shooting, there have been several community responses to this blatant disregard for the life of an African-American youth in an area of San Francisco historically known as the heart of the African-American community. Now, after years of gentrification, the remaining African-American residents call themselves “the last 3 percent.”

People came out on the streets on the night of the shooting. The next day, a community vigil was followed by a community town hall meeting that night. After that gathering, large crowds poured into the streets and blocked traffic. 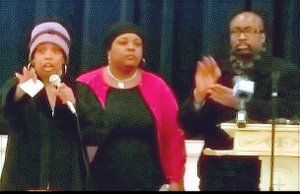 Community members packed the San Francisco Police Department town hall meeting on Dec. 4, expressing their outrage. Police Chief Greg Suhr tried to claim the usual “police were in fear of their lives” justification for the killing. Suhr showed an enlarged frame from one of the videos which showed Woods with his arms extended, and claimed it showed the victim was pointing a small kitchen knife at the officers.

However, when community activists downloaded the same video and played it in slow motion, it was clear that police fired the first shot before Woods’ arm was extended — and so the victim’s movement could have been a reflex to that shot.

Hundreds of angry protesters turned up on Dec. 9 at the first San Francisco Commission meeting since the shooting. They demanded Suhr’s resignation.

Two days later, hundreds of high school and middle-school students walked out of school to protest this police killing. One group started at the Bay Area Rapid Transit station on 16th and Mission streets and marched to City Hall, where they were met by more students. Then they marched down Market Street toward Union Square, chanting “Black lives matter!” and “Justice for Mario Woods!” shutting down several intersections along the way.

At the same time, John Burris, the Woods’ family attorney, announced at a press conference that he was filing a federal civil rights lawsuit on behalf of the victim’s family. As Burris released a third — and very revealing — eyewitness video, he said, “Mario’s arms were at his sides. He was not committing a dangerous act. He was not threatening police officers at the time. He was walking slowly. It was the police officer that created [a] confrontation when he jumped in front of him.”

A Dec. 12 article in SFGate.com continued, “Burris questioned whether Woods had a knife on him at the time of his death. On the video, it is unclear if he is armed. Burris also asserted that the officers involved should be indicted.” Additionally, Burris said that “attorneys at his office counted 20 bullet wounds on Woods’ body, including several in his back and to the back of his head.”

On Dec. 11 the SFPD released the names of the five officers involved in Woods’ shooting: Winson Seto, Antonio Santos, Charles August, Nicholas Cuevas and Scott Phillips. They are all on administrative leave with pay.

KPFA radio commentator Davey D. Cook asked in his Dec. 12 blog post: “Where is Kamala Harris on this Mario Woods Killing?” Harris is the California State Attorney General and is projected to be the Democratic Party’s nominee to replace outgoing Sen. Barbara Boxer. Harris has not prosecuted a single killer cop since she’s been in office. The Justice for Alan Blueford Coalition held a rally at the Oakland State Building in February 2014 demanding that Harris prosecute the cops who killed African-American youth Alan Blueford and countless others across the state. Eight people were arrested for civil disobedience, including this writer.

In yet another instance of recent police violence, Oakland officers fatally gunned down Richard Perkins Jr. in East Oakland on Nov. 15. The officers say that he pointed a pellet gun at them, which was mistaken for a real gun. Multiple shots were fired. The East Oakland community is outraged.

However, there was no eyewitness video of Perkins’ slaying, and the Oakland Police had turned off their body cameras. The only known video footage was taken by a gas station security camera. It was immediately confiscated by the police and has yet to be made public. Only a people’s struggle can win the release of this video.