Members of United Auto Workers Local 833 are standing strong on the picket lines at Kohler Co. By the hour, the workers in Kohler, Wis., continue to receive solidarity support from across the country.

The strike started on Nov. 15 when 94 percent of members voted to reject an unequal, two-tier wage system which Kohler refuses to scrap. 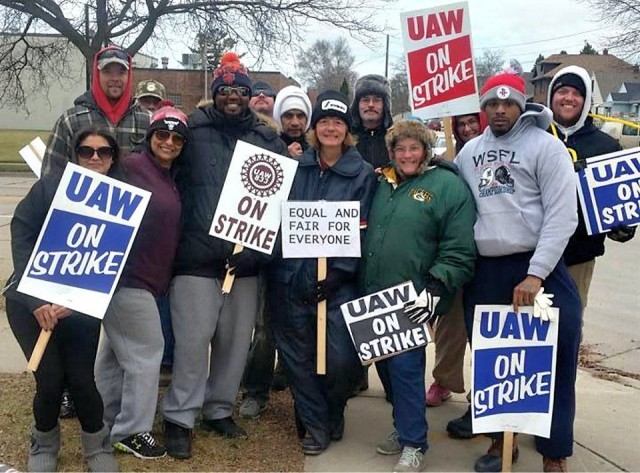 Two-tier wages were rammed through in a 2010 contract that had other major concessions, including skyrocketing health care insurance costs. “Tier B” workers make at least $10 less an hour than “Tier A” workers.

The wealth that Kohler rips off from workers increased over $5 billion during the last five-year contract.

Local 833 reports that during the week of Dec. 6, its leadership and company officials will sit down for a discussion over major strike issues.

Since the first day of the strike, numerous solidarity actions have taken place, including mass rallies and marches, food drives, around-the-clock picket line support and more. The UAW Local 833 Facebook page is updated frequently to show worldwide support for the strike. The Wisconsin AFL-CIO is helping to coordinate support from its member unions, while the Milwaukee Teachers Education Association is offering a variety of support. Every day numerous labor-community delegations join the picket lines and visit the Local 833 union hall.

On Dec. 5, a Milwaukee delegation, including Youth Empowered in the Struggle or YES, members of the Wisconsin Bail Out The People Movement and other community supporters, walked the picket lines.

“This strike has gone national. We are looking as strong as ever!” stated Local 833 leadership on Nov. 29. ‘We thank those who are out there and those in the community and across the state who are supporting us, walking with us, and donating to our strike fund. There is more support than we could have even imagined.”