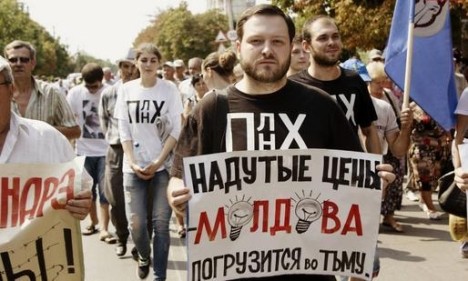 Workers World is publishing this statement by the interim leader of Moldova’s Red Bloc communist party, Alexandr V. Gutovski. The Red Bloc is the party of Grigory Petrenko and six other political activists imprisoned since September by the authorities of Moldova, a former Soviet republic of 4.3 million people lying between Ukraine and Romania. The statement was translated by WW contributing editor Greg Butterfield.

Since the start of the peaceful, anti-oligarchic protests in 2015, launched by the party “Our Home is Moldova” (Red Bloc) and personally by Grigory Petrenko, there has been an explosion of information revealing corruption schemes, networks of cronyism and nepotism in the work of public services and facilities controlled by the number one oligarch in Moldova: Vladimir Plahotniuc. Statements by the communists, who have proven their struggle with the oligarchy is irreconcilable, were enough to start making Plahotniuc nervous.

The malicious plan of the oligarch to raise utility rates, to enrich himself through control of energy supplies, angered the popular masses, who supported the peaceful protests of Red Bloc at the ANRE [Regulatory Authority for Energy] and companies controlled by Plahotniuc — Hotel Nobil and GBC [Global Business Center].

The formation of the first tent city, at the house of oligarch Plahotniuc at 41 Bulgarian Street, outraged the puppeteer and tore away his veneer of seemingly eternal calm. Provocations of the oligarch-controlled security forces and private armies continued day and night, whether it was fireworks and flares thrown into the tents of “Liberty Township,” or attacks on peaceful protesters by specially trained fighters of Plahotniuc’s private army, even in the presence of police.

The police crackdown on the tent city, under the patronage of the Chisinau Mayor’s Office, came after eight days of protests. This marked the beginning of a series of arrests of civil society activists and supporters of the party “Our Home is Moldova.” After the violent dispersal of “Liberty Township,” there was no doubt that the oligarch was reeling on his throne.

The people’s mobilization of Sept. 6, 2015, gathered thousands of citizens under the banner of Stefan cel Mare and the flags of the Republic of Moldova. They made clear their anti-oligarchic position, anger at the corruption of the Moldovan system, and the popular will to resist.

The protest at the General Prosecutor’s Office once again pointed out the corrupt nature of the Moldovan system, Plahotniuc’s fear of the masses, of those who know that they are worthy of a better life without thieves in power, without lawlessness and corruption, without bribery, with the right to freedom, where people are worthy of life, not just survival, in their native land — in Moldova.

The subsequent arrests of those “undesirables” who dared disagree with Plahotniuc, and their imprisonment for the last three months, tells us many things. But first of all, it shows the fear of the puppeteer before the people of Moldova, before an active civil society, before a strong left-wing political formation — the Red Bloc — which, in a short time, has proven itself in many ways.

We did not break. Activists of the party “Our Home is Moldova” and Grigory Petrenko forced an auditing of ANRE and the abolition of the onerous tariffs for 90 days, to ascertain the legitimacy of the increase, and raised the parliamentary mandate against Plahotniuc that led to his withdrawal as an MP of the Democratic Party.

The political party “Our Home is Moldova” does not cease its activities.

Down with the oligarchs! Down with Plahotniuc!

Interim leader of “Our Home is Moldova” (Red Bloc)