Cleveland — Nov. 22 marked one year since the police murder of 12-year-old Tamir Rice. The video of Cleveland police officers Timothy Loehmann and Frank Garmback pulling up to the youngster and gunning him down in less than two seconds has been viewed by horrified people in the U.S. and around the world.

Adding to the trauma incurred by Tamir’s family is despicable treatment by Cuyahoga County Prosecutor Timothy McGinty. Not only has there been no indictment of the officers, but McGinty launched a vicious personal attack on Samaria Rice, mother of the slain youth. 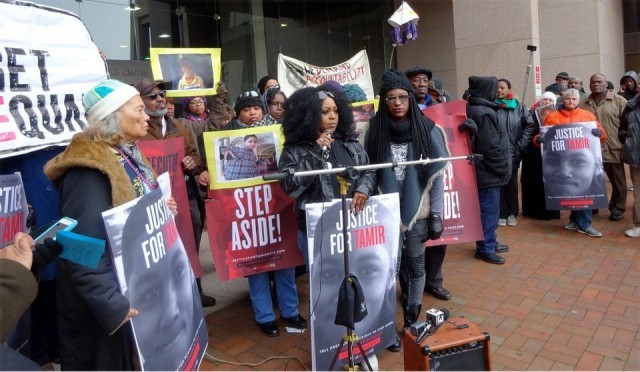 On Nov. 19, while speaking at a suburban Democratic Club meeting, McGinty was asked about calls for a special prosecutor to take over the investigation. McGinty replied, “They waited until they didn’t like the reports they received. They’re very interesting people … let me just leave it at that … and they have their own economic motives.” (WKYC-TV, Nov. 15)

McGinty’s office released reports to the press by so-called “expert” witnesses, who concluded that Loehmann, who pulled the trigger, thought he was in imminent danger and “acted reasonably.” McGinty also issued unsworn statements by new hire Loehmann and Garmback, the senior officer training him. (New York Times, Oct. 15)

Garmback has a racist record. The city of Cleveland had to pay $100,000 to an African-American woman for the beating she received from Garmback on Aug. 7, 2010. This vicious racist trains a new officer?

McGinty timed his tainted and biased releases to the public while the grand jury is deciding whether to indict the brutal cops. The obviously hateful conduct of this prosecutor has led to increased calls for a special prosecutor to take over the case.

Keeping the pressure on

To mark one year with no justice for the family, the Tamir Rice Justice Committee, spearheaded by Tamir’s cousin, Latonya Goldsby, held three days of events in Cleveland. Healing events for young people who knew Tamir were held on Nov. 21, as well as two town hall meetings, which included briefings by the family and their attorney, Subodh Chandra.

The vigil on Nov. 22, held at the site of Tamir’s execution, drew over 400 participants, including car caravans from around the Midwest. A busload of multinational Black Lives Matter activists and their supporters came from Ohio State University. People came to show respect for the life cut short by the police and to support the Rice family. There were also solidarity actions in more than 20 cities.

On Nov. 23, a militant rally was held on the steps of the Cuyahoga County “Justice” Center to support the Rice family’s call for prosecutor McGinty to resign. In an effort spearheaded by the Tamir Rice Justice Committee and colorofchange.org, more than 200,000 people signed petitions demanding McGinty step down and a special prosecutor take over. The petitions were delivered to the prosecutor’s office.

The way the rules are written, McGinty himself gets to decide whether to recuse himself and step down. He has steadfastly refused.

However, due to the militant pushback around the country by the Black Lives Matter movement, the moneyed interests in northeast Ohio are conflicted about what to do with this case. Big-business print media mouthpiece, The Plain Dealer, has published the expert reports commissioned by the Rice family, which state that the shooting was unreasonable and there was no way Tamir was given any warning to hold up his hands. Even Garmback’s police report states that the windows of the patrol car were up.

No longer can the hired hands of the ruling class hide their ugly crimes. The Black Lives Matter movement, supported by people of all nationalities, cannot and will not be stopped.

Justice for Tamir Rice and all those killed by racist cops!