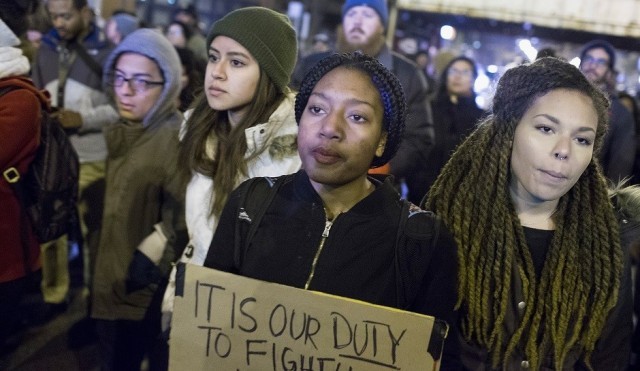 Dec. 7 — Demonstrations against the police murder of Laquan McDonald continued all week in light of more and more evidence that officer Jason Van Dyke shot McDonald 16 times on Oct. 20, 2014, with no provocation.

Another dash-cam video revealed clear contradictions in the official report, which was also released following the filing of a request under the Freedom of Information Act. The report includes hundreds of pages of police incident reports and police witness statements.

Three lies in the reports were clear from the video. First, the 17-year-old McDonald never advanced toward the officer. Second, after he was initially shot, he did not try to get up. He was incapacitated. One document even stated that Van Dyke was injured by McDonald, which was a complete fabrication.

Van Dyke was charged with first-degree murder last week, 13 months after McDonald was killed. The cop’s family easily made bail, which was set at a $1.5 million bond, and he is now free on the street.

Mayor Rahm Emanuel, in an attempt to save his own job, withdrew his official support of the police commissioner and then fired him. Pressure remains for both the mayor and the state’s attorney to resign.

On Dec. 4, protesters marched around Chicago City Hall 16 times, representing the number of shots fired at McDonald. They demand the firing of all cops complicit in the shooting and cover up. 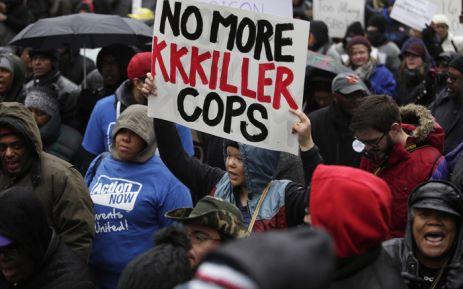 The next day, demonstrations took place again on the “Magnificent Mile” to bring economic pressure on the city. Stores claimed 25- to 50-percent fewer sales for so-called Black Friday last week, after thousands of youth and supporters blocked entrances to stores shouting, “Sixteen times! 13 months!” referring to the number of times McDonald was shot and the number of months the city authorities covered up the murder. More demonstrations are called for this week.

No justice for Ronald Johnson

The mass actions’ impact can be seen and not only in the backpedaling of the politicians, who are clearly on the defensive. Pressure on them mounts as the culture of rampant police terror and cover-up is exposed. This week, again after months of refusal by the authorities to release a dash-cam video that would expose another murder, the mayor agreed to release the video at the requests of attorneys for Ronald Johnson’s family.

Johnson, 25, was shot and killed by a white cop eight days prior to McDonald’s shooting. The officer remains on desk duty. Johnson’s mother filed a federal lawsuit against Chicago police shortly after the shooting of her son. This release is clearly a result of the mass actions that are unraveling the power of the police to act with impunity to kill Black youth.

The Johnson family’s attorney, Michael Oppenheimer, told CNN on Dec. 2: “The dash-cam video, which I’m not allowed to show you today, clearly shows that he was not carrying a weapon, nor did he ever turn and point anything. The police department planted that gun because there’s no way anything would have stayed in Ronald Johnson’s hand after he was shot.” Johnson was the father of five small children.

Today, however, Cook County State’s Attorney Anita Alvarez announced she would not press charges against the cop who killed Johnson.

As more outrages continue to occur, only the constant mobilization of youth and supporters will expose and challenge the racist nature of this system.

These actions show who are the real terrorists and mass murderers in a city like Chicago, where there have been over 300 police shootings of civilians since 2010.

More young Black men have been shot and killed by police in Chicago than any other U.S. city. McDonald’s case is the first time any

police officer has been charged with murder for a shooting while on the job.