Protests were held across the country on and around Black Friday — the day after the so-called Thanksgiving holiday that businesses rely on to boost their retail sales — to demand an end to racist attacks, including police brutality and murders, and the pervasive racist climate on college campuses.

The Baltimore People’s Power Assembly held a spirited rally in downtown Baltimore on Nov. 28 in solidarity with Minneapolis and Chicago. Protesters then marched to the police headquarters.

Nearly 150 students from many different backgrounds marched on the campus of the University of Rochester on Nov. 28, demanding that the university president do something about the growing climate of racism on campus. Of special concern is the posting of numerous racist and threatening messages on an online campus site. The college president was forced to subpoena the server in an attempt to find out who was posting the attacks. The students are also demanding a more diverse faculty and more Black studies courses. 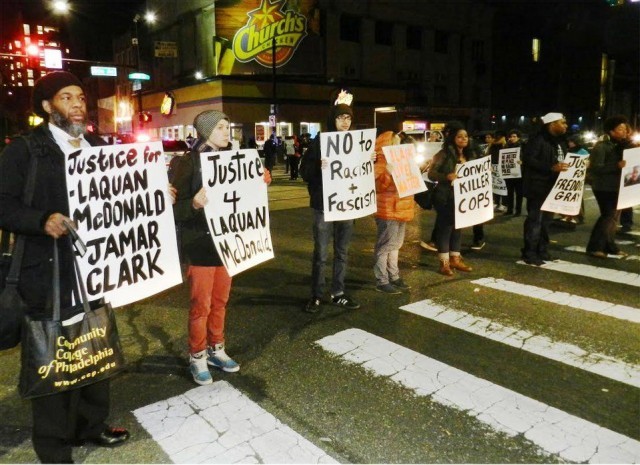 More than 100 Philadelphia protesters marched on Nov. 25 in outrage against continued police killings of Black youth. The demonstration was called by the Coalition for Racial, Economic And Legal (REAL) Justice in response to the release of a video of the horrific Chicago police killing of 17-year-old Laquan McDonald, and the right-wing shootings of five Minneapolis activists who were protesting the death of 24-year-old Jamar Clark, who was killed by that city’s 4th Precinct cops.

Despite the aggressive actions of 75 Philadelphia cops on bikes, on foot and in cars, the rally quickly took over the main intersection in the heart of this city’s Black community at Broad Street and Erie Avenue. As rush-hour traffic in all four directions was halted and protesters’ signs faced traffic, the mother of a young man shot 14 times by Philly police a few years ago came over and gave a very moving and angry account of her son’s death. A few minutes later, bicycle cops started pushing protesters into a smaller circle in an attempt to surround the protest, but the demonstrators were able to break away and march south on Broad Street.

“16 shots killed Laquan — murdered by cops — unjustified!” was one of many chants the crowd yelled out in unison as the marchers eventually reached Temple University’s campus. Turning west on Cecil B. Moore Avenue, the demonstration ended 10 blocks later with a rally at Ridge Avenue, in one of this city’s most oppressed Black communities.

Speakers explained that resistance and revolution are called for in the face of police terror, rampant gentrification, mass incarceration and the closing of public schools. Among those who gathered to listen were area youth; a young Latino gay activist who recently sued the city for police brutality targeting homeless LGBTQ youth; and another woman, whose 16-year-old son was killed by police seven years ago. The rally finished with the reading of the names of the 1,027 people killed by police so far this year.

The multinational demonstrators first marched around the retail core for four hours. The chanting march paraded through several big stores, including Macy’s, but when the demonstration tried to enter two malls they were beaten back and four were arrested. Downtown big business brags about doing $1 billion in sales every holiday shopping season.

The cops, in large numbers, blocked the demonstration from entering the area for the lighting ceremony. Demonstrators had to mix in with the rest of the crowd and filter in slowly one by one. First, they drowned out the stage show for an hour with anti-police brutality chants. Then, just before the Christmas lights came on, the chants became even louder and a big Black Lives Matter banner was held around the base of the tree. A victory rally was then held to wrap up.

“We are the last 3% of Black SF” was the banner held by Black Lives Matter Bay Area, Calif., protesters as they challenged San Francisco Mayor Ed Lee at the city’s annual tree lighting ceremony at Union Square on Nov. 27. They served him an eviction notice as they halted the ceremony. A flyer with a “wanted” poster of Lee said the mayor “wages war on Black lives, exacerbates gentrification of San Francisco, chooses profit over people, evicts the homeless, over-polices Black communities, tries to expand SF jails.” The flyer asked people to call the mayor and demand that he end Black displacement.

After the ceremony, the protesters marched down Powell Street to Market Street, stopping at many intersections and blocking them, while chanting and singing, including the lyrics, “We will not be moved on Black Friday.”