The following remarks were made by Greg Butterfield at the Workers World Party National Conference in New York City Nov. 7. 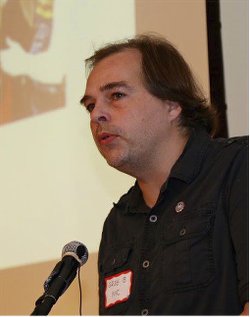 On Nov. 6, the U.S.-dominated NATO alliance completed its largest-ever military exercises, Trident Juncture. These massive war games, involving 30 countries, were planned well ahead of the current escalation in Syria. In fact, Trident Juncture is all about NATO expansion in Eastern Europe and the former Soviet Union specifically, using the far-right junta in Ukraine as a stepping stone to regime change in Russia.

The U.S. proxy war by Ukraine against the independent Donetsk and Lugansk People’s Republics has temporarily taken a back seat to the conflict in the Middle East. There is not time here to give an in-depth analysis of developments in Ukraine and Donbass. But we should all understand that this conflict could flare up again at any time, and inevitably, it will.

These are challenging days for the Donbass republics, under pressure from the Russian government to abide by the Minsk ceasefire agreement, which the Ukrainian government does not respect for a single day. Donbass residents and the people’s militias feel like they are in a state of limbo — their battle “frozen” and seemingly out of their control, at least for the moment.

But the struggle continues. The Ghost Brigade, the most radical, class-conscious and internationalist detachment of the people’s militia, continues to recruit, train and prepare for the inevitable battles ahead. Several comrades from the outlawed Ukrainian communist organization Borotba are now working with the Ghosts in Lugansk.

It was just a year ago, at a rally honoring the anniversary of the Bolshevik Revolution, that Ghost Brigade Commander Alexei Mozgovoi declared: “We shall build a free, anti-fascist and socialist Novorossiya.” After several months building the Ghost Brigade, Mozgovoi had learned that some of his best allies were communists, whom he promoted to leadership roles, and who deeply influenced his thinking.

Last February, he tasked the head of the Volunteer Communist Detachment, Pyotr Birukov, with operational leadership of the offensive that handed the Ukrainian military a stinging defeat. It was then that Ghost comrades raised the red flag of communism over the liberated village of Debaltsevo.

Mozgovoi’s meteoric development — from a working-class populist with ambiguous politics to the region’s leading symbol of socialism and internationalism — was remarkable. It also put a target on his chest, and he was assassinated by unknown assailants on May 23.

Despite this tragic loss, the Ghost Brigade marches on. Recently, Ghost announced the formation of Interunit — a military/propaganda squad made up of internationalist volunteers from several countries. Interunit takes its motto, “No pasaran!” from the international brigades of the Spanish Civil War.

Workers World Party stands firmly with the people of Donbass, Ukrainian-occupied areas of Novorossiya, as well as the embattled communists and antifascists of Ukraine, in their struggle against U.S. imperialism and its agents.

A big protest movement has engulfed Moldova, a country dominated by pro-Western oligarchs and strongly influenced by the Ukrainian junta. This protest movement has both right- and left-wings, which so far have created a different dynamic from the far-right Maidan movement that dominates Ukraine.

But the critical role of communists has been seriously hampered by the jailing of seven leading activists, including Red Bloc party leader Grigory Petrenko, for the last two months. Petrenko and his comrades face up to eight years in prison. Our party stands with the Red Bloc and the workers and youth of Moldova to demand: Free the political prisoners now!