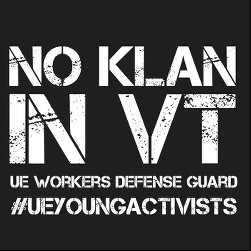 Call for Workers Defense Guards against the Klan by UE Local 203, Burlington, VT.

More than 200 people marched down Church Street to City Hall in Burlington, Vt., on Nov. 5 to oppose the Ku Klux Klan, which had recently left racist threats on the doors of two Black workers. The march was organized by Local 203 of the United Electrical, Radio and Machine Workers (UE) and joined a speak-out action organized by Rights & Democracy. Members of UE Locals 255 and 267 also participated, along with other community organizations.

“KKK get out of town, we have come to shut you down,” the group chanted. “KKK get off our streets, the union will tear off your sheets.”

On Oct. 29, letter-sized fliers were placed on the doors of two different Black workers, one an activist with Black Lives Matter, with the intent to intimidate them. The posters read, “Join The Klan and Save Our Land!!!!” and depict a hooded, cross-wielding Klansman riding a horse in front of a U.S. colonial flag and a Confederate flag.

Speaking in front of the crowd, UE Local 203 member Senowa Mize-Fox stated, “Racism is alive and well everywhere, including Burlington, and we have to address that.”

UE members also circulated a statement that began, “The sisters and brothers of our Union … have zero tolerance for the Klan. The recent appearance of KKK fliers on the doors or people of color in Burlington is an intolerable threat. We as a community cannot react softly. These fliers are not free speech. They are not a prank, nor a joke. They were designed to spread fear and insecurity, to threaten, and to announce the presence of a larger organization historically drenched in blood.” (To read the full statement, go to Labor Against Racist Terror on Facebook.)

Anti-racist activists across the country have been protesting against all forms of institutionalized racism in the aftermath of the June 17 massacre of nine Black church parishioners at the Mother Emanuel African Methodist Episcopal Church in Charleston, S.C., by white racist Dylann Roof. Many in the movement demanded the removal of Confederate flags from government buildings and protested the names of schools and other public buildings for Confederate army generals throughout the U.S.

South Burlington High School was allowed to keep its nickname, “The Rebels,” which references the Confederates, in a recent school board ruling.

Over Labor Day weekend, leaders of the International Longshoremen’s Association Local 1422 in Charleston and other unions, including the Southern Workers Assembly and Black community groups, organized a mass march to oppose the murders at the AME church and also the police murder of Walter Scott in North Charleston, S.C.

In response to this movement, racists, white supremacists, fascists and right-wingers of all stripes have been on the defensive, and have been publicly displaying Confederate flags as acts of defiance. However, they have often been confronted with great mass resistance.

In situations such as in Burlington, police departments often wipe their hands clean and do a very cursory investigation. Despite the fact that there is a surveillance video showing someone posting the KKK messages, the police have still not arrested the racist culprit.

A study of the Greensboro Massacre of Nov. 3, 1979, reveals this type of collusion among the KKK, the police and even the federal government. Five people were killed in this incident, including labor and community organizers.

Bernard Butkovich, an undercover agent for the Bureau of Alcohol, Tobacco and Firearms, later testified that he was aware that Klansmen and members of the American Nazi Party unit that he had infiltrated would confront and kill demonstrators. Although the massacre was fully filmed by a television news agency, not a single person ever served any jail time.

Members of UE Local 203 and the UE Young Activist program in Burlington have formed a Workers Defense Guard to continue to stand against racial injustice and physically defend those under attack by the KKK and other white-supremacist hate groups.

“Workers understand that we cannot rely on the police to protect us against racists and vigilantes like the KKK,” stated Elizabeth Nikazmerad, president of Local 203. She continued, “That is why we are organizing a Workers Defense Guard to defend ourselves and anyone in the Black community who needs defense.”