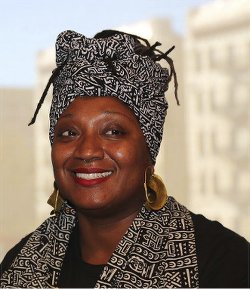 I’m presenting to the party a proposal to mobilize across the country for the Democratic National Convention held in Philadelphia this coming July of 2016. Philadelphia is the birthplace of the Declaration of Independence, placed in Congress on July 4, 1776. Within this document the colonists declared they no longer wanted to be under a state of repression without the inclusion of the voice of the people it represented.

Those people, the founding fathers of the so-called American government weren’t speaking of the representation of the entirety of the colonies. They were speaking completely of themselves: the wealthy landowners, the dictators of class within the society and the proprietors of businesses. The people they were not speaking of had no say in the formation of this document because they were not considered worthy of input nor were they considered respectable enough. That included women, the poor, the slaves and the workers. They all had no say in the formation of this government. What the founding fathers did know was that they too were under the guise of dictatorship that did not have the best interest of the people as a whole in mind.

What they chose to forget was the country was founded on capitalism and state-sanctioned violence. They robbed, killed and slaughtered the Native people of this land. You can’t find something that already existed before you arrived.

Within this document they spoke of all men being created equal. They had certain unalienable rights, that gifted life, liberty and the pursuit of happiness.  That to secure these rights, governments are instituted among men, deriving their just powers from the consent of the governed, the people, that whenever any form of government becomes destructive of these ends, it is the right of the people to alter or to abolish it, and to institute a new government, laying its foundation on such principles and organizing its powers in such form, as to them shall seem most likely to effect their safety and happiness.

They criticized the British for quartering large bodies of armed troops among them, for imposing taxes on them without their consent and waging war against them.

This has been the history of the United States since it declared independence from the British government. The city of Philadelphia has long been a city that represents the rule of the wealthy and has constantly placed itself ahead by stepping on the backs of the poor to advance its policies of the ruling population.

Philadelphia is the birthplace of solitary confinement in the prison system. Philadelphia, being one of the four largest cities in the country, has one of the highest poverty rates affecting the Black and Brown communities the most. Philadelphia has one of the most failing school districts in the country, where the district stores books the length of a city block in the basement, while the illiteracy rate soars within our communities. The district has accumulated millions of dollars of debt for schools, yet the city profits by closing and selling schools for private development and now uses these old buildings as landmark living for condos.

The gentrification in Philadelphia has pushed more people of color out of their neighborhoods and into senior living facilities, if not directly into homelessness; the homeless population has increased to the point of whole families living on the street. We saw this with the coming of the pope, when mothers with babies as young as one month old were on the streets. Just last week, a young child was taken and placed into Department of Homeland Security custody because he wandered off while his mother slept on the streets.

Police brutality is as historic as the name itself in Philadelphia, from the invasion and slaughtering of the Lenni Lenape tribes to the brutal beating and stripping of the Panthers and the framing of the Move 9, to the unjust beating of Tyree Carroll. Just this past week, a man by the name of Omar Lopez was killed by a transit cop who tased him to death. We are still seeking justice for young Darren Manning, whose testicles were ruptured by a female officer, who has yet to be held accountable. He was only 16. We are still demanding justice for Brandon Tate Brown, Frank McQueen and our beloved Mumia Abu-Jamal. We are still demanding the fair and equal treatment of our LGBTQ community, for gender-neutral bathrooms everywhere and to be called by their preferred pronouns and names. We seek justice for London Chanell and Kiesha Jenkins, and we demand that they too be protected within our communities.

All over the city, the people are rising up, the students, the homeless, the disabled, the elderly, the wage workers, the immigrants, and more importantly the people as a whole.

This is a significant sign that the only solution is a socialist revolution. Philadelphia is Baltimore, Philadelphia is Ferguson, Philadelphia is Chicago and Detroit. Philadelphia represents all the barrios throughout world. We heard the cries of “Justice for Freddie Grey” in Tel Aviv and we hear the chants of “Black Lives Matter” in Palestine.

Oppressed people here and throughout the world will be free. My daughter will see a socialist revolution in her lifetime, this lifetime.

It’s not enough to go to D.C. for one day and shut down the capital or to call for an execution of shopping for Black Friday. We must begin the shutdown of the entire economy. All the corporations that rob our communities of a true meaningful life. The entire capitalist system as a whole must be abolished and shut down!

We must demand that the true meaning of democracy be established and that is by raising up the voices of the people and demanding a government that actually serves the best interest in the common good of the people. We must take back the land, the airways, the buildings, the political offices. We must get away from these two-party elections and the voting straight Democratic analogy that so many of us believed in and kept us oppressed.

We must educate our communities on what it means to be a socialist. Bernie Sanders called himself a socialist, now it’s time to show and prove. Forget marching within the civil rights era. What about the children being gunned downed by the cops? Hillary Clinton is in favor of keeping the death penalty. Why? Because she’s a murderer.

No decent human being should ever want to be authorial of taking someone’s life, especially when we have a faulty penal system that locks away so many of my Black and Brown people who are innocent. Especially when cops commit more crime than actual criminals. Especially when her husband, Bill Clinton, implemented the three-strike rule that has so many of my brothers and sisters incarcerated for life for nonviolent crimes. There’s one million Black men missing from our society and you can believe, between Ronald Reagan’s drug wars and Bill Clinton’s three-strike rule, our men are in prison or in the grave. Every other week we hear of exonerations of people after they have spent most of their life in jail, falsely accused and set up by this government. They put the drugs in our communities, then blame us for using them. They put the guns in our communities. Now they want to disarm us. We say, I say, hell no! You don’t disarm people. You direct the people to take up arms against the system and not themselves.

We can’t be selective by picking the lesser of two evils when the selective assassinations of our unarmed people are rising. We can no longer afford to watch the government push back our Social Security benefits to age 70, while expanding prison development and murdering our babies as young as 3 and 7 years of age.

We can no longer see the failing of school officials and their failed discipline of our children on display when we are watching police toss our young women across the floor like rag dolls for being a typical teenager. We can no longer sit in silence while the Supreme Court has on the table a decision to sentence our children to life. We can’t afford to send troops to fight wars across seas when the wars are in our own backyards.

More importantly, we want to live. We want to breathe. Our lives are worth more than a trending hashtag. It’s time to defend our lives in the present.

This system is so disturbed, it will piss on you and then claim it’s raining. The role of police has always been to protect and serve, so they’re doing their jobs: protecting the wealth, and the land has changed from the plantation to the corporation. There are no good cops in a racist system. You can be a good friend, neighbor, son, daughter or whatever you choose, but when you put on that uniform you represent historic racist oppression that was meant and designed to keep the Black and Brown people on the plantation and now slaves to prison labor.

The only solution is a socialist revolution!

It’s time to mobilize the masses and demand they work for our vote. Disown inequality and stand on the right side of justice. The people’s side. Demand that they address the issues that affect the Black, Brown and other oppressed communities the most. Demand these pigs get out of our homes, schools, neighborhoods and demand that all prisoners who are victims of this cruel system be set free. The power is in the people and we have the right, as declared in the Declaration of Independence, to rid ourselves of this faulty capitalist system. To abolish, not reform. You can’t reform a wretched system. That’s simply asking the oppressor to let up off our necks a little bit. We want them off our necks, backs, shoulders and anywhere else that’s uncomfortable.

We must build a true socialist society that’s written by us, for us.

That includes all members of our society. It’s our right and we must invoke them at all costs. Resistance is the only solution. There can be no peaceful revolution when we can’t live, eat, sleep or breathe in peace.

This is why we mobilize. This is why the Democratic National Convention must be shut down.

Resistance is justified when people are occupied.

This mobilization will consist of each localized party going to their respective communities and engaging the public and different organizations into meetings for mobilization and flooding  the city of Philadelphia for three days of civil unrest and possibly, to form an All-People’s Power Assembly conference.

We in Philadelphia have established the date of Dec. 18 to begin holding these meetings to form a coalition for the DNC. I’m asking the party for their participation and leadership for this process. And to seize this opportunity and bring the people to the forefront of smashing capitalism, while also empowering ourselves to pick up the torch of our beloved ancestors. To take what’s ours and stand up against all forms of repression.

To bring the youth along we must include the music that speaks directly to capitalism and the government such as in a way themselves, the youth can relate: Marvin Gaye said, “Money, I make it before I see it you take it.” Nas said he’d “open every cell in Attica and send them to Africa.” Tupac said we “got money for wars but can’t feed the poor.” Jada Kiss said, “We gon make it.” Kendrick Lamar said, “We gon be alright.” Gil Scott-Heron said, “The revolution will not be televised, it will be mobilized and publicized by the masses.”

In the words of our great sister and comrade, Assata Shakur: “It is our duty to fight for our freedom. It is our duty to win, We must love and support one another. We have nothing to lose but our chains!”