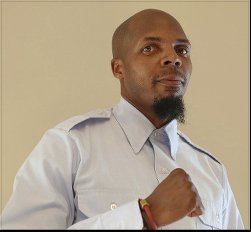 What we produce isn’t just a newspaper, comrades; it’s a serious weapon of truth and liberation. Our newspaper is a calling card to the people. It’s a living tangible witness to the capitalist crisis, an orientation in working-class language that any oppressed person worldwide can pick up and relate to. That’s a very powerful tool. Our Workers World newspaper is a roadmap to revolution — a type of literary GPS to justice and freedom fighting. What I’m holding isn’t just a newspaper, comrades. It’s a weapon of revolutionary information, a bridge to mass consciousness and critical theory; and honestly, it’s one of the best weapons we have. It was the Workers World newspaper that initially sparked my interest in the party.

What we produce, comrades, in the form of our weekly newspaper, is the last and only printed weekly Marxist-Leninist periodical in the United States. We’re the last weekly revolutionary newspaper still standing. And that’s something that we should all be very proud of. And when you take pride in something, you take care of it. You defend it, you protect it, you share it, you love it. You invest in it and help it to reach its fullest potential.

At the plenum a few months ago, I commented on how I’ve recently traveled to different branches as a visiting organizer. One of the first things I’ve noticed is stacks of Workers World newspapers sitting on desks, chairs and filing cabinets. Most of us are already doing a lot, and stretched quite thin. But we can do more, comrades. We can do better. We will do better!

Get these newspapers out of your cars, your branch offices, your homes and apartments! It doesn’t do workers or oppressed people any good when Workers World newspapers are lying around idle. What we provide is the exact kind of information that working-class people need to have in their hands, comrades.

You don’t keep your best revolutionary weapon at home, locked up in some storage closet for keepsake. No, we should be sharing it with every community we can, especially in poor and oppressed communities. Our newspaper should be in every ghetto in the United States — in every “hood” and housing project we can find. Real talk! We should be taking our papers to the barber shops, beauty salons and soul food restaurants — to the bus stations and homeless shelters — to the Social Service office, where the poor and oppressed are standing in long lines for their EBT cards and child care vouchers.

Take them to high schools and college campuses, where Black and Brown youth are being patrolled by campus police and school resource officers. The youth know exactly what we’re talking about. They inherited this capitalist police state. They’re living it, which is why we want our best weapon in the public libraries, visible and accessible to the working class — to parents and children, alike. Any place that poor and oppressed people are struggling and fighting just to hold on, is exactly where the Workers World newspaper should be — on the frontlines, in the streets, comrades!

What makes our newspaper so powerful is that when you open it up, there isn’t one relevant struggle that at least one of our comrades isn’t covering — from local to national to international; from workers’ rights to Immigration to Black Liberation; from the LGBTQ liberation movement to women’s rights and planned parenthood; from gentrification in Oakland to water shutoffs in Detroit; from police terror to the fight for $15; from Troy Davis to Sandra Bland; from Syria to Cuba to South Africa. Just think about that for a minute. That’s a hell of a damn spread, comrades.

I was thinking the other day how when you live something, or live with something every day, you sometimes take it for granted. If you all don’t mind, I would like to ask the audience a question. How many comrades in here are married, dating or partnered? Raise your hands, please. Raise them high, so we can see you. Good, it’s good to know we still have some love birds flying around. Now think back to when you all first starting dating — you couldn’t keep your hands off each other. You were on fire 24 hours a day! He, she or they were the most beautiful thing you had ever seen. Everything they did or said was simply perfect to you. Sometimes you just sat and stared at each other. You couldn’t get enough of them.

But as time goes on, sometimes you forget just how marvelous they are. You take for granted that they’ll always be there; sometimes they even become “old news” to you. On the contrary, to the total strangers in the world, who may meet, greet or see your partner for the first time — to them, your spouse is absolutely amazing: their personality, their good looks, their sense of humor. The same dress or same suit that you’ve been seeing for years, to someone else, it’s the best thing they ever saw!

Our newspaper is the same way, comrades. We live it. We write it. We sleep with it and wake up to it every day. Some of our comrades have been living and writing it for 30 and 40 years — Fred Goldstein, 54 years. And some of us may have slipped into taking it for granted. But, oh wow! To the people who see it for the first time, it’s the best thing they ever saw.

I remember when I first starting seeing the paper. Man, I would read every article! I would outline and highlight quotes in yellow markers. I literally couldn’t get enough. And I kept thinking, wow, all these different struggles in different states and countries. I said to myself, “Who are these people? Where are they? And how do I get in contact with them?” And it’s the same way other oppressed people respond when they pick it up. I’ve even received letters from sisters and brothers who are getting our newspaper in jails and prisons, from Texas to Colorado. We can’t forget about them, comrades. Those who are incarcerated definitely need our newspaper. Our newspaper is a symbol of love, resistance and support.

Recently, I was able to get some insider information from one of our newspaper staffers, web editor comrade Gary Wilson. It’s the web editor who makes sure that everything looks good when people visit our website. It’s the web editor who keeps track of all the hits and web statistics. Brother Wilson shared with me that right now there’s about a thousand users on our website each day — with about 200 of them being regular readers. All the others are brand-new to the site. He explained how during peak periods (when something major has happened in the world and people want to know about it) there can be as many as 20,000 new readers a day.

Most of our new readers come through either Google or Facebook (for the most part, equally divided between the two). We also have about 1,500 email subscribers and approximately 3,000 followers of the newspaper on Twitter. It’s when things happen that the number of visitors to the site goes up. The Workers World website is one of the places people go when they want to find out about major events from a revolutionary perspective.

This information is important because, in actuality, our website is a virtual extension of our hard copy physical newspaper. It’s the same content, but simply in a virtual form. We should view them as one and the same. It’s a new generation, comrades. Some of the young people don’t read newspapers anymore. They’re on the Internet and their blogs. They’re on these new tablet things where you can read a whole book on the computer screen.

If the youth are on their iphones, that’s exactly where we have to get the newspaper. Yes, on iphones, comrades! If you don’t change with the times, the times will leave you behind. And as far as I’m concerned, the best newspaper in the United States can’t afford to be left behind. Let’s put this newspaper in the hands of the people, comrades, by any means necessary.