Nov. 4 — Workers at the two Brooklyn, N.Y., warehouses of B&H, the largest non-chain photo/video equipment store in the U.S., voted overwhelmingly today for union representation with the United Steelworkers in a National Labor Relations Board election. The vote comes on the heels of a weeks-long anti-union campaign waged by B&H management, with workers alleging daily threats, harassment and intimidation in the workplace.

Lawyers for the union have filed multiple charges with the NLRB, alleging B&H engaged in unlawful anti-union activity during the course of the campaign. 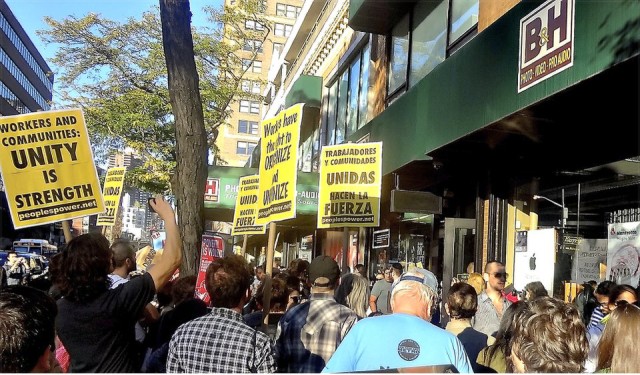 Workers remained strong in the face of management tactics, confident in the widespread support for unionization in their workplace. “We knew we would win our vote today by a large margin, which of course the company did not expect,” said Jorge Lora, B&H warehouse worker of five years. “Today we won because the workers voted with their conscience.”

Workers publicly announced their intent to organize with the United Steelworkers on Oct. 11, after receiving training and support from the grass-roots, worker-led community organization, Laundry Workers Center. Since the campaign launch, a groundswell of support has grown among community, faith and labor groups, as well as thousands of photo/video professionals and B&H customers.

On the eve of the union vote, the Photo/Video Alliance for Fair Labor released an open letter to B&H management with over 1,000 signers in journalism, fine art and commercial photography, film, television and academia, calling on B&H “to end the hazardous working conditions and discrimination workers report at B&H’s Brooklyn warehouses.”

News of the landslide victory was welcomed by dozens of supporters who waited outside both Brooklyn warehouses to congratulate workers coming off their shift. “We want to share this moment with other workers so they also know that they no longer have to feel exploited,” said Alberto Sánchez, B&H employee for seven years. “We were taught our rights, and now we have to pass that on to other workers so they can fight back against the exploitation and discrimination they face.”

In a United Steelworkers release the same day, USW District 4 Director John Shinn said, “We welcome the workers at B&H to the USW and look forward to addressing their concerns with the company at the bargaining table.”

The USW represents 850,000 workers in North America employed in many industries, including metals, rubber, chemicals, paper, oil refining, and  service and public sectors.