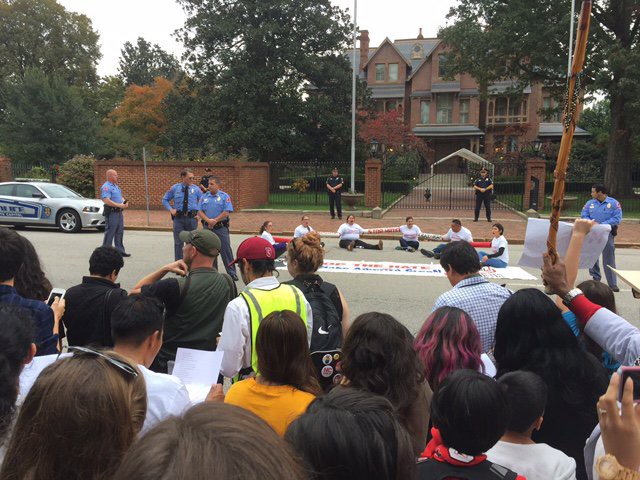 Activists gathered in front of North Carolina Gov. Pat McCrory’s mansion on Oct. 29 to protest the signing of anti-immigrant House Bill 318. This bill has several provisions which all act to harm immigrants and workers, such as prohibiting the use of consular documents as identification and proof of residency. Additionally, it would prevent cities and counties from choosing to become “sanctuary” cities, where local governments could determine the extent to which local law enforcement collaborates with federal immigration agencies and procedures.

Speakers highlighted the issues facing immigrant families, students, youth and others who were present at the action, decrying the deportation of undocumented people and reminding the crowd of the contributions that immigrants have made to the community and the state of North Carolina.

Six brave immigrant activists from various organizations and backgrounds took the streets, linked together with handcuffs covered by polyvinyl chloride tubes that read “Black + Brown Power” and “Stop Hate!” Ivanna Gonzales, one of these protestors, said, “HB 318 is an attack on immigrant workers and a distraction from the indignities that all North Carolinian workers suffer every day. I won’t stand for it.”

For several hours, police and other officials cut through the PVC tubes to separate these determined activists, as they and the crowd demanded an end to HB 318.

This powerful action succeeded in sending a message to those in power that the community is watching. This community will continue to interrupt their comfort, at their front doors if necessary, until they put an end to these hateful, unnecessary laws that deliberately attack immigrants in North Carolina and across the country.