Anti-war forces have been demonstrating throughout Europe, especially in Europe’s southern states. They are protesting NATO’s aggressive “Trident Juncture” exercises.

These war games tested the North Atlantic Treaty Organization’s command structures from Oct. 3 to Oct. 16, and troop movements and operations from Oct. 18 to Nov. 6. They involve 36,000 troops from 33 countries, using 60 ships and 200 aircraft and are taking place on the territories of Portugal, Spain and Italy. 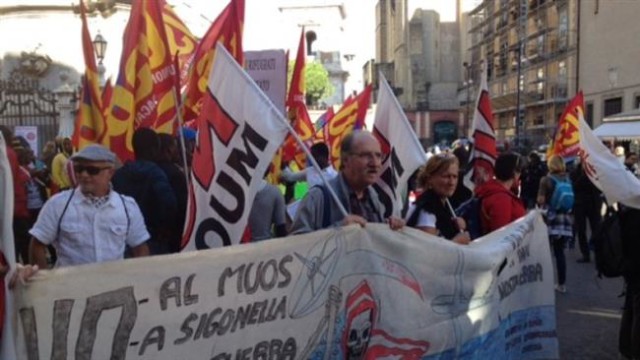 Thousands of protesters take part in an anti-NATO protest in Naples, Italy, on Oct.24.

NATO was founded in 1949 as a U.S. initiative. U.S. generals have always commanded NATO. Washington mobilized the ruling classes of the West European capitalist countries to confront the Soviet Union and prevent the Western European working classes from putting their representatives in power.

In post-Soviet 1999, Washington succeeded in turning NATO into a sort of worldwide intervention force for use in Eastern Europe, Africa and West Asia. In recent years, NATO has carried out direct aggression against Iraq, Afghanistan and Libya and has worked through proxy forces in Ukraine and Syria. The NATO interventions have left all these countries in turmoil, with 1 million to 2 million people killed and millions more made refugees.

The “Trident Juncture” exercises are aimed at testing a rapid “Response Force.” These war maneuvers are employing 40,000 troops to project military force to the east and south in order to expand the domination of corporations from the U.S. and the European Union. The operational headquarters for the exercises is located in Naples, Italy.

In the week ending Oct. 25, labor and anti-war organizations mobilized demonstrations in Portugal, Spain and Italy to protest the Trident Juncture war games.

Several organizations, including the large labor confederation CGTP-IN, plus anti-war and women’s groups, demonstrated on Oct. 24 in Lisbon, Portugal. Public meetings and protests took place in other Portuguese cities leading up to that date. The main slogan was, “Yes to peace! No to NATO!” (cgtp.pt)

In Spain, demonstrations took place in Zaragoza, in the Canary Islands and on Oct. 25 in Madrid, where thousands marched. A one-day meeting for the Forum Against Imperialist War and NATO is scheduled for Oct. 27 in Barcelona, and a three-day tribunal on Nov. 6-8 in Madrid will put the imperialist military and its collaborators on trial. (tinyurl.com/pbb66ht)

In Italy, thousands of demonstrators held a national march through Naples on Oct. 24 and a protest in Rome the next day. The “No to NATO” organization is holding public meetings in different cities, including the capital, in the coming weeks.

On the opening day of the active exercises, U.S. Ambassador Alexander Vershkow, the vice secretary general of NATO, held a news conference at Trapani-Birgi military airport in Sicily. Vershkow promoted the NATO maneuvers and criticized Russia.

A determined war resister named Marinella Correggia managed to get the microphone and answered Vershkow’s speech: ”But it was exactly NATO’s war in Libya that put the jihadist in power who helped spread terrorism, and it was NATO that created a failed state in Libya. And NATO members who destroy countries with direct or proxy wars. And it was NATO that bombed the hospital in Afghanistan days ago.” (email message)

With courageous individual actions, meetings and mass demonstrations, resisters in Europe are speaking out against Trident Juncture and NATO. n