The situation in the Middle East has been a hotbed of chaos for some time now. From the unjust wars in Iraq and Afghanistan to the quagmire you have now in Syria regarding the Islamic State group. Not even Yemen has been spared from the imperialist forces interfering in the self-determination of its peoples. There is one struggle, however, that has remained since 1948, and that is the struggle for the liberation of Palestine from the grip of the cruel Zionist police state.

Less than a year after the conflict in Gaza during the summer of 2014, we see another conflict arise from Palestinian lands, this time including not only Gaza but the West Bank and Jerusalem as well. 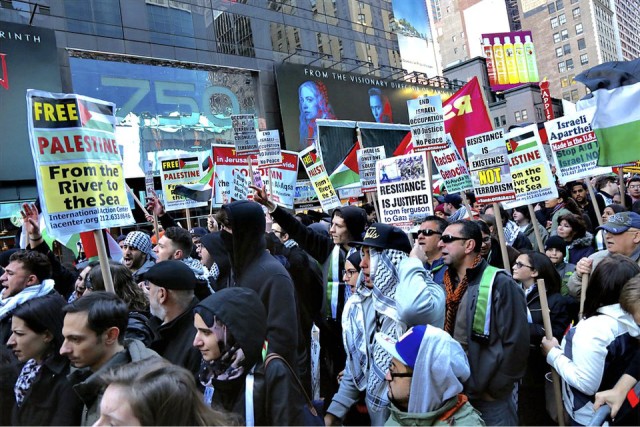 This chapter in this long struggle to freedom started a month ago, when in mid-September the Israeli military decided to go into the Al-Aqsa mosque, the second holiest site in Islam, and allow Zionist extremists to wreak havoc among the Muslim/Palestinian worshippers. Even though the Palestinians and Muslims were defending their right to be at the mosque against these religious extremists, they were treated like the aggressors. Their rights were squashed, and the Zionist radicals were allowed to continue.

This led to a wave of instability across occupied East Jerusalem, which poured into the West Bank and Gaza and started confrontations between Palestinians and the Israeli settlers and military. This all occurred as the flag of free Palestine was finally allowed to wave at the United Nations, and exactly at the same time that Palestinian Authority leader Mahmoud Abbas declared that the 1993 Oslo Accords with Israel, which are not being upheld by Israel, are no longer valid and that Palestine no longer has to adhere to them.

This is obviously retaliation on behalf of the Israeli government led by Benjamin Netanyahu, who already has the blood of several thousand Palestinians on his hands. A third Intifada is in the works, and we must support Palestine in its right to freedom and equality.

The hard-handed tactics being used at this moment by the Israeli military are just more violations of human rights on top of an already exhausting list of atrocities. These include the diversion of agricultural water supply to prevent crops from growing in Gaza, not allowing food and supplies into the Palestinian territories, and bulldozing the houses of hundreds of Palestinian families to establish illegal settlements.

The violence that is being seen now in the West Bank, Jerusalem and Gaza is provoked and caused by the Zionist government. What we see from the Palestinian side is the reaction to Israeli tactics. We are also watching the Intifada take form again and resistance begin to solidify across the Palestinian territories. We must stand in solidarity with Palestine and all oppressed people across the world. Long live a free Palestine!