“We are humbled by the solidarity shown to us from Milwaukee transit riders, labor unions and community activists who stood with us throughout our fight for a fair contract,” ATU 998 President James Macon said in a statement. 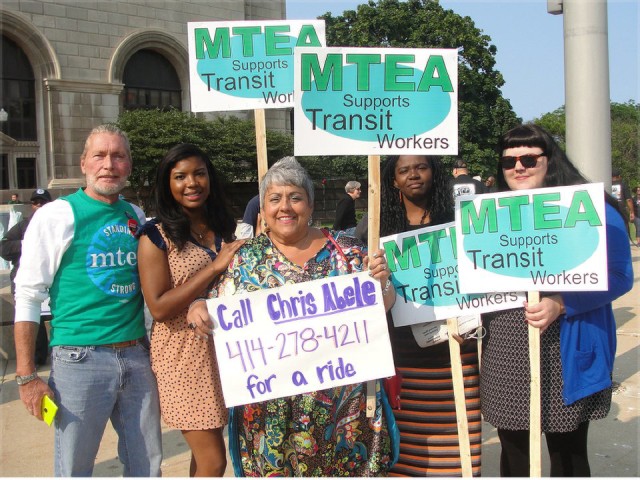 The struggle by ATU 998 members and labor-community supporters ended when negotiators eliminated the bosses’ demands to increase the number of part-time workers and also deleted existing language about part-timers in the old contract. Other victories included no coinsurance payments by workers; uncapping the cost of living allowance (meaning the COLA has no ceiling and no expiration date); the work stoppage won’t count against workers’ attendance records; and the pension, while not increased, was not decreased.

This people’s win occurred despite a climate of deep austerity and union busting in Wisconsin. A highlight of the struggle was the three-day work stoppage in July during the world’s biggest music festival, Summerfest. This action showed the possibilities going forward for creative uses of social-union organizing models in this state.

Born in the 1934 fires of class struggle, ATU 998 has long been a union employing a civil- and human-rights approach. Father James Groppi, the late civil rights activist, was once president of the union, and for decades the membership of drivers and mechanics had a significant number of Black workers in its ranks.

This history was brought to life in ATU 998’s latest contract fight. From the beginning, and increasingly through the struggle, ATU 998 leaders employed a social-union approach, which sparked mass support from a wide variety of progressive forces, many of whom are anti-capitalist and anti-racist.

A decisive component of the struggle was major support provided by the Milwaukee Teachers Education Association and the Coalition For Justice, a Black Lives Matter coalition in Milwaukee.