Classified U.S. Department of Defense documents were released on Oct. 15 by an “extremely principled and brave whistleblower” in the U.S. war apparatus. The secret papers highlighted the death and destruction from widespread U.S. use of remotely piloted drone planes in Afghanistan, Iraq, Yemen, Somalia and elsewhere. (The Guardian)

The Drone Papers, published on The Intercept website, revealed that the U.S. military routinely classifies any unidentified people killed in targeted strikes as “enemies killed in action.” That means all victims are called “enemies,” including family members, friends, neighbors and passing strangers. The report asserts this labeling is a deliberate strategy to conceal civilian deaths.

According to the Drone Papers, in one five-month period nearly 90 percent of the people killed by drones died due to their proximity to intended “targets.”

The report also calls into serious question the accuracy and reliability of U.S. methods used to target people as “legitimate enemy.”

The whistleblower elaborates: “It’s stunning the number of instances when selectors are misattributed to certain people. And it isn’t until several months or years later that you all of a sudden realize that the entire time you thought you were going after this really hot target, you wind up realizing it was his mother’s phone the whole time.” (theintercept.com, Oct. 15)

As the Drone Papers were being released, a stalwart group of UnDrone UpState marchers were coming to the end of a 165-mile journey intended to organize resistance to the “weaponized terror” of drones. 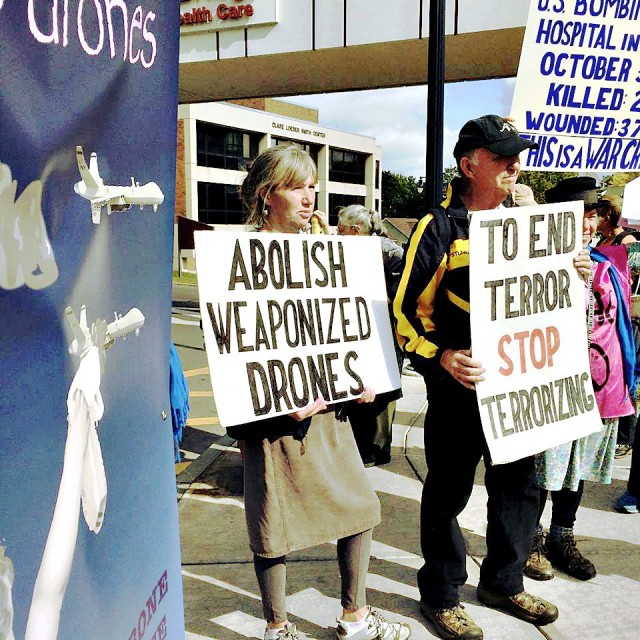 The March to UnDrone Upstate setting out from Syracuse, Oct. 7.
Photo: Russell Brown

On Oct. 19 and 20 marchers arrived at the Niagara Falls Air Reserve Station after beginning their trip Oct. 7 at Hancock Air National Guard Base in Syracuse, N.Y. The walk was organized by the Upstate Coalition to Ground the Drones. (upstatedroneaction.org)

Soldiers at both bases operate MQ-9 Reaper/Predator drones that drop “Hellfire” bombs on locations in Afghanistan and elsewhere. The New York Air National Guard’s 174th Attack Wing is stationed in Syracuse and the Guard’s 107th Air Wing in Niagara Falls.

As U.S. capitalism declines, the ruling class relies more and more on military expansion to dominate and control areas in the global market. At the same time, the U.S. cannot rely on a military draft to supply soldiers as “boots on the ground” for these unpopular “wars without end.” This means an increasing reliance on high-tech warfare: smart bombs, field robots, satellite systems, high-tech missile ships — and drones.

Military-industrial contracts related to drone development are big business in Central and Upstate New York and throughout the U.S. The 2016 Department of Defense budget allocates $1.94 billion for research, production, maintenance and munitions for the MQ Reaper drones like those piloted out of Syracuse and Niagara Falls.

The total drone budget for the U.S. military is exponentially greater as the DOD intends to up its drone use by 50 percent in the next four years. For instance, the U.S. Air Force plans to build a drone base at Agadez, Nigeria, in addition to its current drone base in Niamey, Niger. These will enable extensive U.S. drone surveillance and strikes in eastern and northern Africa. (dronecenter.bard.edu)

But the use of high-tech warfare also opens up the possibility of new kinds of resistance.

Many more people are needed in the chain of command for a high-tech weapon like the MQ Reaper/Predator — with more opportunities for a break in that chain.

Micah Zenko, a senior fellow at the Council on Foreign Relations, points out that to fly the MQ Reaper more than 130 people are needed, with most looking at video screens and doing analysis of drone data collection.

Answering that kind of appeal in the military-industrial ranks are people in the chain of command like the anonymous Drone Papers whistleblower, who decided “enough was enough” and released the drone-damning data.

Vietnam-era resister Daniel Ellsberg praised the Drone Papers source as part of a whistleblower chain including Edward Snowden and Chelsea Manning, both of whom leaked U.S. classified documents related to recent wars. Ellsberg released the classified Pentagon Papers in 1971 that helped incite popular resistance to the U.S. war on Vietnam.

Ellsberg said of the long chain of command linked to U.S. war crimes: “It comes down to this. Hundreds could have done what I did, literally. … [Snowden, Manning and the Drone source] did the right thing. The others were wrong to keep those secrets.” (Guardian, Oct. 15)