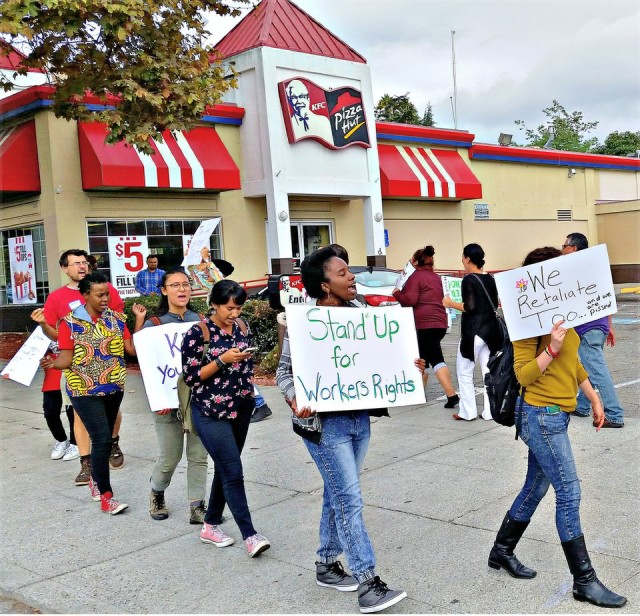 The manager at Kentucky Fried Chicken on Telegraph Avenue and 28th Street in Oakland, Calif., fired union organizer Shonda Roberts on Oct. 17. Roberts has been a lead organizer for the East Bay Organizing Committee for two years. The firing was retaliation for her organizing work to help her co-workers improve their working conditions and increase their pay. EBOC organizes fast-food workers as part of the national Fight for $15 movement.

Roberts actually had an impeccable track record at the KFC/Pizza Hut, with zero write-ups and many loyal customers who consistently go back to the restaurant just to see her. For more than three years, Roberts was the best and most experienced employee in the store.

Almost immediately EBOC, with the help of community supporters, held a seven-hour picket line at the store to demand Roberts’s job back. Picketers weren’t intimidated when KFC/Pizza Hut called out the Oakland Police Department, who showed up with several cars. The workers and community protesters kept up their spirited picket with continued chanting, such as “Hey hey, ho ho — poverty wages got to go.”

After days of relentless actions, petitioning and calls, Roberts’s regional manager sat down with her and the union to discuss the terms of her return to work. He said the KFC management team met and decided the best move would be to offer Roberts her job back. She was set to return on Oct. 25 with back pay.