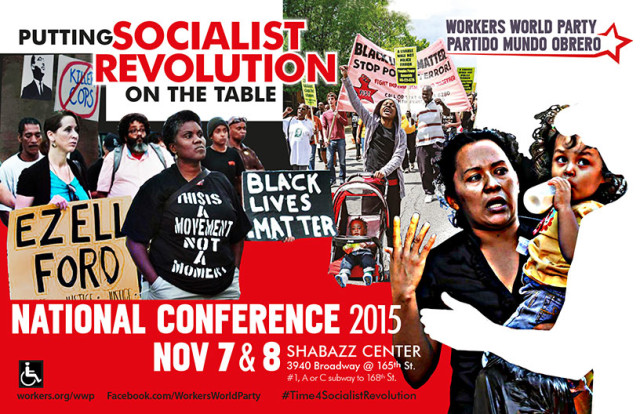 This year, Workers World Party‘s annual conference will be held on Nov. 7 and 8 at the historic Malcolm X and Dr. Betty Shabazz Memorial and Educational Center, located on the Upper West Side of Manhattan in New York.

The center was previously known as the Audubon Ballroom. It is where Malcolm X was assassinated on Feb. 21, 1965, and where the Organization of Afro-American Unity that he co-founded held their meetings. Important public events were also held at the Audubon.

The Audubon Ballroom fell into disrepair following Malcolm’s death, and was subsequently closed. It became the property of New York City in the early 1980s due to owed back taxes. The building was later purchased by Columbia Presbyterian Hospital, which scheduled it for demolition.

It was saved, however, due to community protests and public outcry, including appeals by educator Dr. Betty Shabazz for historical preservation of the site of her spouse’s murder. After much debate the medical center agreed to restore a section of the building as a memorial to Malcolm X, but the stage where he was murdered was demolished.

The Malcolm X and Dr. Betty ­Shabazz Memorial and Educational Center opened on May 18, 2005, the 80th anniversary of Malcolm’s birth. It is a memorial to Malcolm X’s humanitarian efforts and honors the leadership and integrity of his legacy. It is also a symbol of the ongoing struggle of African Americans for social justice and equality. Shabazz, who was instrumental in negotiating for and contributing to the planning of the center, died in 1997.

The Shabazz Center consists of a lobby, a ballroom on the second floor and a basement meeting room. In the lobby is a life-sized bronze statue of Malcolm X by sculptor and activist Gabriel Koren. A large painted mural in the ballroom by Daniel Galvez depicts Malcolm’s life in historic detail. The most complete archives anywhere on the lives of Malcolm X and Betty Shabazz are located at the center, which includes interactive kiosks, a photo gallery, documents and handwritten postcards by Malcolm.

Programs such as teacher workshops for all disciplines are held at the center. The history of civil rights and social justice is taught, and curriculum outlines and lesson plans for the classroom are jointly composed. Hands-on experiential presentations, exhibits and story boards are utilized, including art work, social studies and language. K-12, undergraduate and graduate students are taken on field trips and guided tours to enhance classroom experience.