Oct. 19 — The heroic resistance of the Palestinian people, especially the youth, to the brutal onslaught of Zionist occupation forces, in and outside the military, continues in occupied Palestine. At least 43 Palestinians have been killed.

Israeli attacks began escalating in early October, arousing resistance. Israeli military fired on Palestinians throwing stones at a border fence on Oct. 9, killing six and wounding two dozen others at a protest inside northern Gaza in solidarity with those resisting in the occupied West Bank and Jerusalem. The same day, others were killed and wounded as individual racist Israelis and Palestinian resisters wrangled in various areas of occupied Palestine. 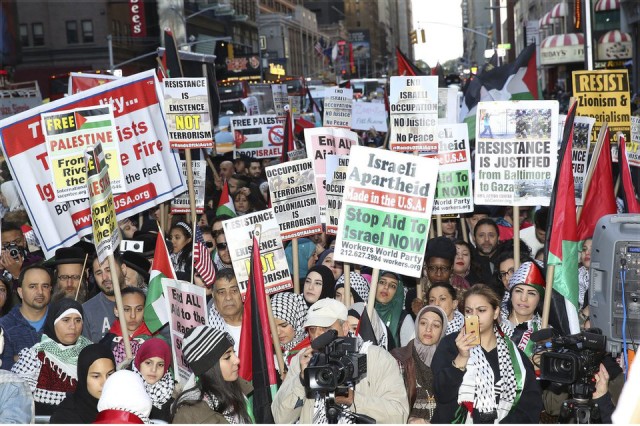 An estimated 2,000 Palestinians and their supporters rallied in New York’s Times Square Oct. 18 on three days notice
and then marched passed by a small Zionist gathering.
Photo: NY4Palestine

The Oct. 9 massacre caused the Hamas leader in Gaza to declare a third Intifada — popular uprising. That day at a mosque in Gaza City, Ismail Haniyeh exhorted in a sermon: “We are calling for the strengthening and increasing of the Intifada. It is the only path that will lead to liberation. Gaza will fulfil its role in the Jerusalem Intifada and it is more than ready for confrontation.” (Guardian, Oct. 9)

On Oct. 18,  Israeli forces shot Palestinians throughout the West Bank and Gaza. The Ma’an News Agency described some of the events:

“In the village of Tuqu east of Bethlehem, a Palestinian teenager was shot in the stomach by Israeli soldiers. … Witnesses said that more than 100 Israeli soldiers raided the village, after a military vehicle was set on fire by a Molotov cocktail. Israeli soldiers fired tear gas, stun grenades and rubber-coated steel bullets during the clashes, they said. 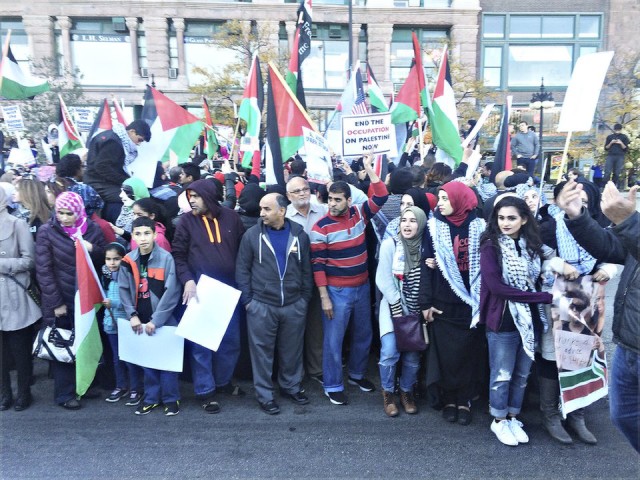 “Clashes also erupted in the Gaza Strip, with three Palestinians shot and injured with live rounds east of al-Buriej in central Gaza. Ashraq Qidra, a spokesman for Gaza’s Ministry of Health, told Ma’an that in addition to the three shot with life fire, several others suffered excessive tear gas inhalation and were treated on site.

“Some 43 Palestinians have been killed by Israeli forces since the start of the month, and eight Israelis have died in attacks by Palestinians in the same period.

“The UN Office for the Coordination of Humanitarian Affairs reported that the second week of October saw the highest number of Palestinian deaths and injuries in the West Bank and Israel recorded in a single week since 2005.” Various accounts state more than 1,900 Palestinians have been injured.

The hashtag #Intifada has grown widely on social media throughout the world. In cities across imperialist Europe, including London, Paris, Brussels and Copenhagen, demonstrations in solidarity with the Palestinian resistance have taken place and are still being organized. Johannesburg, Sydney, Melbourne and other cities across the world also had protests.

Here in the United States, where taxpayers fork over more than $10.2 million per day (ifamericansknew.org) to apartheid Israel, demonstrations occurred as well. Workers World Party members and activists in affiliated organizations took part in many of them.

The night of Oct. 15, hundreds filled the sidewalks facing the Israeli Consulate in the financial district of San Francisco to demand an end to the continued brutal occupation of Palestine. The protest, organized by the General Union of Palestinian Students, urged supporters to “Rise with Palestine” and support the youth-led Intifada.

Palestinian youth led the protest and rally in both English and Arabic. Chants of “When Palestine is occupied, resistance is not a crime!” brought cheers and loud support from rush-hour drivers passing through the district. The protest, co-sponsored by a broad coalition of Palestinian, anti-war, social justice and other groups, demanded the immediate return of Palestine to its 1948 borders and an end to the apartheid Israeli state.

In Atlanta on Oct. 18, a speak-out, organized by Jewish Voices for Peace, was held in front of CNN headquarters. 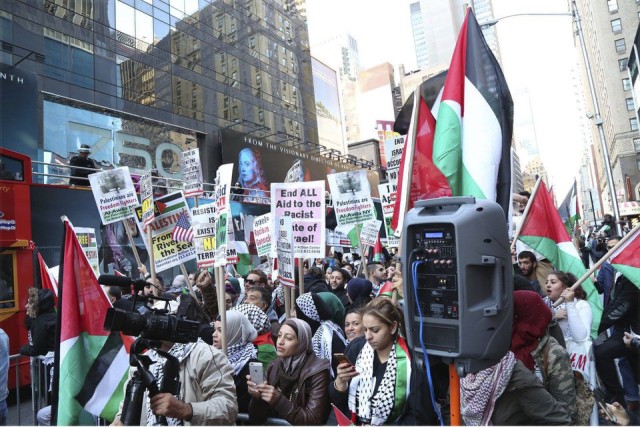 In New York City, the New York Campaign for the Boycott of Israel called another rally against Zionism Oct. 16 as Israel’s Idan Raichel was performing at Manhattan’s City Winery. He is among the targets of a Palestinian boycott  because he serves as an official cultural ambassador of the colonizer state and is an outspoken supporter of the Israeli army, according to Adalah-NY.

On Oct. 18, a counter-rally opposed a “Jewish Lives Matter” rally by Zionists. In addition to hijacking the Black Lives Matter slogan, the racists held a moment of silence for Israelis killed, with no regard for the disproportionate violence and death experienced by Palestinians every day under 60-plus years of occupation.

Militant demonstrators in front of the Federal building in downtown Rochester, N.Y., withstood a torrential downpour on Oct. 16 to show support for Palestine and to protest the murder of Palestinian youth.

The march was sponsored by local Palestinian activists, a large number of them youth, as well as the International Action Center, Christians Witnessing for Palestine, Jewish Voice for Peace, and other religious and community organizations. 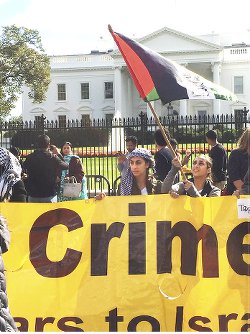 Carrying signs that called for an end to U.S. aid to Israel and its occupation of Palestine, protesters chanted, “Free, free, Palestine, democratic Palestine!” and “Resistance is justified when oppressed people are occupied.”

The demonstration moved to a downtown street corner where it was warmly received by passing motorists who loudly honked their horns.

In Dearborn, Mich., a western suburb of Detroit, Palestinians, Muslims and Christians alike gathered Oct. 18 to stand with the oppressed and show solidarity with the people of Palestine who are fighting just to live in their homeland. Many of the protesters were young. A contingent of children, teens and other youth led hundreds in chanting in solidarity with the Intifada. Representatives from the Detroit progressive movement came from Workers World Party and the Michigan Emergency Committee Against War and Injustice. Abayomi Azikiwe, a MECAWI leader, was one of the rally speakers.

More protests are planned to continue the struggle for a free Palestine. At the next Dearborn City Council meeting, activists will ask the city to divest from Israel.