As the U.S. imperialist war machine continues to churn out chaos and destruction abroad, a new wave of militancy is sweeping across those most oppressed at home. Here, we highlight a few of the ways prisoners have played decisive roles in struggles from inside the belly of the beast this year.

Regular readers of Workers World will surely know the name Mumia Abu-Jamal, the world-renowned journalist and political prisoner. But what about Major Tillery? Along with Mumia, Major is serving a life sentence in Pennsylvania’s notorious SCI Mahanoy prison. Also like Mumia, Major has earned admiration through his role as a jailhouse lawyer. A 1990 lawsuit brought by Major against the Commonwealth of Pennsylvania resulted in the practice of “double dealing” — crowding as many as four men into a single jail cell — being declared unconstitutional.

In 2015, several weeks before Mumia was first brought to the brink of death by untreated diabetic shock, Major warned prison officials of Mumia’s declining health. When guards told him to mind his own business, Major responded, according to Mumia himself, “That’s what I’m doing, cuz that’s my brother — and I want for my brother what I want for myself!” (PrisonRadio.org, Aug. 20)

As is usually the case, prison guards responded to this brave act of solidarity with severe retaliation, sentencing Major to solitary confinement for six months on trumped-up drug charges. Upon hearing Major’s story, activists across the globe flooded prison officials’ offices with calls and letters demanding Major’s release from solitary. On Sept. 1, two months ahead of the completion of his sentence in solitary, Major was placed back in general population. (Justice4MajorTillery.blogspot.com, Sept. 3)

Despite widespread condemnation of the use of long-term solitary confinement in U.S. prisons, including from the United Nations Committee Against Torture and the U.N. Human Rights Committee, it took the mass movement of thousands of prisoners themselves to really challenge this form of institutional torture in California. In 2011, prisoners in California’s infamous Pelican Bay State Prison, where solitary confinement sentences routinely lasted over 10 years, launched a hunger strike to call attention to their inhumane treatment.

In 2012, inmates in solitary signed a historic Agreement to End Hostilities in order to “end the violence between the various ethnic groups in California prisons [and] inspire not only state prisoners, but also jail detainees, county prisoners and our communities on the street, to oppose ethnic and racial violence,” according to a statement written by the prisoners. (Workers World, Sept. 4)

By 2013, more than 30,000 prisoners in California and beyond had joined the hunger strike, making it the largest in history. Finally, in 2015, Gov. Jerry Brown, under tremendous pressure from prisoners and their supporters, agreed to a settlement whereby the state would phase out the use of indefinite solitary confinement. According to the nonprofit Center for Constitutional Rights, “Ultimately, [the settlement] is the result not merely of litigation, but of a widespread community effort led by prisoners and their families.” (CCRjustice.org, Sept. 1) 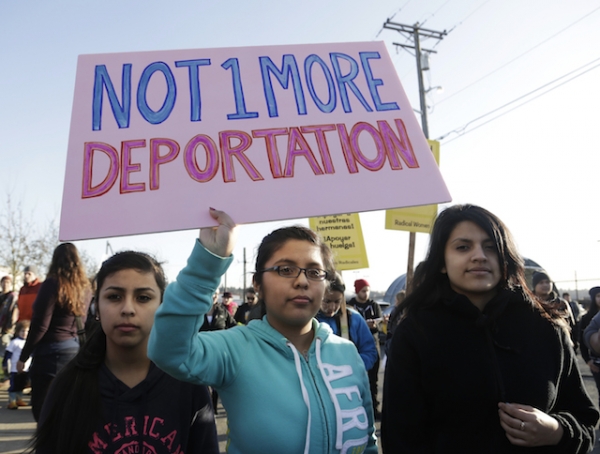 Outside the Karnes Family Detention Camp, in Karnes City, Texas.

Every year, hundreds of thousands of undocumented immigrants, the great majority of them refugees created by U.S. neoliberal policies in the Global South, are arrested and jailed without trial in detention camps while they await deportation. When migrant families are arrested together, they are typically sent to any of three family detention camps in the U.S. — two in Texas and one in Pennsylvania — where even young children languish in prison-like conditions.

On March 31, mothers detained in Karnes Family Detention Camp in Texas launched a work strike and hunger strike, demanding to be set free with their children. According to a statement signed by all the mothers in the prison, translated from Spanish, “During this Hunger Strike, no mother will work in the center of detention or send our children to school. We will not use any of the services provided by this place until we have been heard and our freedom has been approved.” (EndFamilyDetention.com)

Less than three months later, in June, 10 mothers imprisoned at the Berks County, Pa., Family Detention Camp launched a work strike, demanding freedom for themselves and their children, and for the camp to be shut down.

On Aug. 21, a federal judge ruled in favor of 10 imprisoned mothers who had brought a suit against the government, directing the Obama administration to begin releasing all detained mothers and children by Oct. 23. (McClatchyDC.com, Aug. 22)