Oct. 12 — No matter who set off the bombs in Ankara on Oct. 10, the Turkish regime led by President Recep Tayyip Erdogan is responsible for the explosions that killed more than 128 peace demonstrators and wounded hundreds more in the country’s capital. That is the view of leaders of the leftist People’s Democratic Party (HDP) and other observers.

The two explosions, apparently set off by suicide bombers, went off as tens of thousands of people had gathered for a march, called by the HDP, youth groups and unions. The marchers were demanding that the Erdogan regime conclude a cease-fire and make peace with the guerrilla forces from the Workers Party of Kurdistan (PKK). The PKK itself had just declared it would honor a cease-fire if the regime also refrained from attacks. 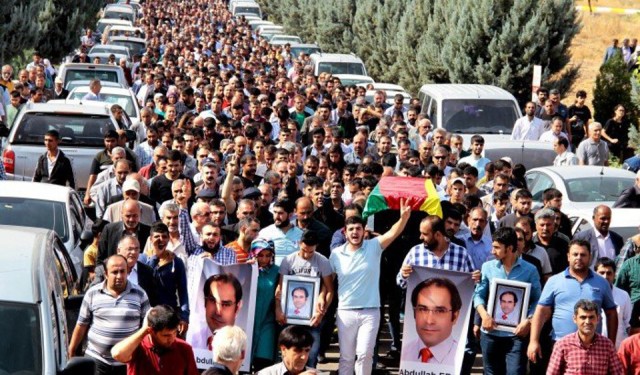 Demonstrations and marches mourning the dead and vowing to continue the fight have already taken place across Turkey and in many European cities, especially where there are Kurdish immigrants. The DISK and KESK labor union coalitions called for a general strike on Oct. 12 and 13. The target is the regime.

The first reaction of the Turkish police reinforced the argument that the regime was responsible. Just after the explosions, police launched an attack with water cannon, tear gas and clubs on demonstrators who were trying to aid those wounded by the bombs.

HDP and other left spokespeople also accuse the Turkish political police — who are ubiquitous and claim to know every detail of political events inside Turkey — of knowing about this planned bombing and allowing it to happen.

Erdogan’s Justice Party (AKP) government has conducted a long-range strategy with the goal — shared with and encouraged by U.S. imperialism — of overthrowing the Bashar al-Assad government in Syria and establishing a Turkish client state there. To do this, the AKP regime has worked closely, if quietly, with anti-Assad groups similar to al-Qaida and those now known as the Islamic State group.

Besides the Syrian army and Hezbollah from Lebanon, the most effective anti-Islamic State fighters in Syria have been from the PKK and the PKK’s sister organization in the Kurdish regions of north and northeast Syria.

Since the AKP and the Turkish military consider the Kurds to be the biggest threat to Turkish nationalism, they have sided with the Islamic State group against the Kurdish fighters. The Islamic State group and others have been able to move in and out of Turkey, resupplying and resting their fighters. As some HDP spokespeople have said, this strategy has led to “bringing the Syrian war inside Turkey.” (Democracy Now!, Oct. 12)

Following the bombing, Turkish Prime Minister Ahmet Davutoglu from the AKP made a 20-minute talk accusing the PKK and revolutionary Turkish groups essentially of bombing themselves; he mentioned the Islamic State group for only a minute.

Recent electoral struggles have also made the Erdogan regime focus its attacks on the HDP as well as on the PKK and Kurds in general. Erdogan had schemed before last June’s national election for his ruling Justice Party to increase its majority to 60 percent of the seats in Parliament. This would allow him to change the Turkish Constitution and consolidate his rule by strongly increasing presidential powers.

Instead, the AKP lost 71 seats, winning only a minority — 258 — of the 550 seats. The new leftist/Kurdish coalition party, the HDP, won a surprising 79 seats. By sowing turmoil, the AKP, still the biggest party in parliament, hopes to disrupt the HDP campaign and intimidate the women, workers and youth who voted for HDP.

From its overall strategy against Syria and its narrower focus on the November elections, the AKP as well as the Turkish state — military and army — can logically be held responsible for the massacre of the demonstrators. This is true even if Islamic State suicide bombers carried it out.

U.S. imperialism also shares responsibility because of its decades-long strategy in the West Asian region of sowing religious and civil war in order to weaken any sovereign states. Washington has done this even though it resulted in creating and strengthening the Islamic State group and related forces that are incompatible with establishing a stable puppet regime. While this strategy has brought no clear victory for imperialism, it has created havoc and misery for the people there.