Royal Dutch Shell Oil announced on Sept. 28 that it is shutting down — for now — its drilling operations in the Arctic Ocean off the coast of northern Alaska.

For three years, Indigenous community and environmental groups have waged a fierce “sHell No!” campaign against the corporation’s $7 billion program to drill for and extract billions of gallons of oil and natural gas from wells in the Arctic’s harsh environment. The Obama administration had approved the oil giant’s drilling plans. 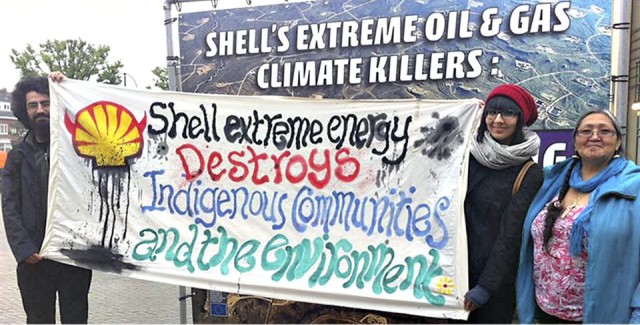 Last spring, thousands of protesters massed at Shell’s company terminal in Seattle, while some activists in kayaks even tried to block the oil company’s drilling rig from leaving the harbor.

At the end of July, activists dangled on cables strung from the high St. John’s Bridge over the Willamette River for an entire day to block a Shell Oil support vessel. Sixty other protesters were in kayaks in the river below. This followed another action by 200 kayakers a week earlier.

Already, activist groups had forced the oil giant to cut in half its drilling this past summer. They drew attention to noise violations that threatened polar bears, walruses and other wildlife caused by Shell’s planned simultaneous drilling in another nearby site. The government agreed with the activists’ argument.

Certainly the strong campaign of Indigenous groups and environmentalists, which aroused massive public opposition to the drilling, was a factor in Shell’s decision. They are rightfully declaring Shell’s decision to withdraw its rigs a victory. “Big oil has sustained an unmitigated defeat,” said John Sauven, Greenpeace’s executive director, on Sept. 28 at the organization’s blog.

Not only are fisheries and wildlife in the area directly threatened by the drilling there, but the extraction and burning of this oil would result in a huge increase in worldwide carbon emissions and global warming. The climate in the Arctic regions is already warming at twice the rate of that of the rest of the globe. This severely threatens the livelihoods of the Indigenous communities in the area who depend on hunting and fishing.

The Obama administration has taken a public stance against burning fossil fuels. Yet its “Energy Department advisory council called for an immediate expansion of oil exploration in the American Arctic to avoid an increased reliance on imported oil in the future,” — in part, because it would take more than 10 years for oil in the Arctic to get to market, said Hawaii News on Sept. 28.

As Workers World newspaper pointed out on Sept. 3, the Pentagon had already drawn up plans to parade its naval fleet in the steadily melting Arctic Ocean to back up Big Oil’s dangerous oil drilling with military force.

Another consideration in the oil giant’s decision to quit the Arctic is that oil prices have decreased over the past year from more than $100 a barrel to today’s price of $45. With a stagnant global economy and the current glut in oil stockpiles, Shell reckoned that the expensive drilling in the Arctic Ocean’s harsh environment would not generate enough profits.

That could change. Big Oil and the rest of the U.S.’s capitalist class, government and Navy are all waiting with baited breath for oil prices to rise. If that happens, the oil companies will waste no time resuming their drilling ventures, no matter what the catastrophic cost to the Arctic and global environments.

All the terrible effects of global warming, such as drought, wildfires, flooding and increasing storms, mean nothing to the imperialists in their insatiable thirst for greater and greater profits.