An overflow crowd packed the auditorium of the German House here on Sept. 25 to show their determination not to be intimidated by racist and Zionist threats and to defend against racism from Ferguson, Mo., to Palestine. 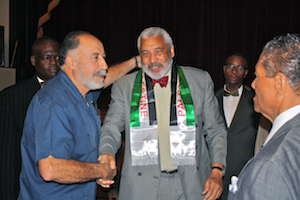 The main speaker at the event, the Rev. Graylan Hagler from the United Church of Christ of Washington, D.C., had received several death threats in the week before he was scheduled to speak at the Rochester-Colgate Divinity School. In addition, local Zionist groups such as the Jewish Federation and Roc-Israel pressured Rochester-Colgate to disinvite Rev. Hagler.

The divinity school’s response was to abruptly cancel the meeting, citing “the need for extra security.” They also charged that the organizers of the event, Christians Witnessing for Palestine, “did [not do] an adequate job of vetting and reviewing the particular speaker’s message and recent history,” even though the title of Rev. Hagler’s talk, “Connecting the Dots: Ferguson to Palestine,” was known far in advance. (Rochester Democrat and Chronicle, Sept. 23)

The meeting was quickly rescheduled at a new venue, co-sponsored by Christians Witnessing for Palestine and the local chapter of the Jewish Voice for Peace.

In addition to speakers from these two groups, a representative of BLACK (Building Leadership and Creating Knowledge), an organization of Black students and their supporters from the University of Rochester who have strongly supported the Black Lives Matter movement locally, spoke to the meeting.

Security was provided by local members of the Nation of Islam and there were no incidents or disruptions.

In a very well received talk, Rev. Hagler recounted incidents of racism carried out against him personally by the Israeli [so-called] Defense Forces when he visited the West Bank of occupied Palestine, as well as the brutal treatment of Palestinians by the occupying IDF.

Rev. Hagler also drew strong parallels between the Palestinians confronting Israeli occupation and the struggle of the Black Lives Matter movement in the U.S. He made the point that many U.S. city police departments have traveled to Israel for training. Then he remarked that it makes sense for those occupying the oppressed communities of the U.S. to receive training from the Israeli occupiers.