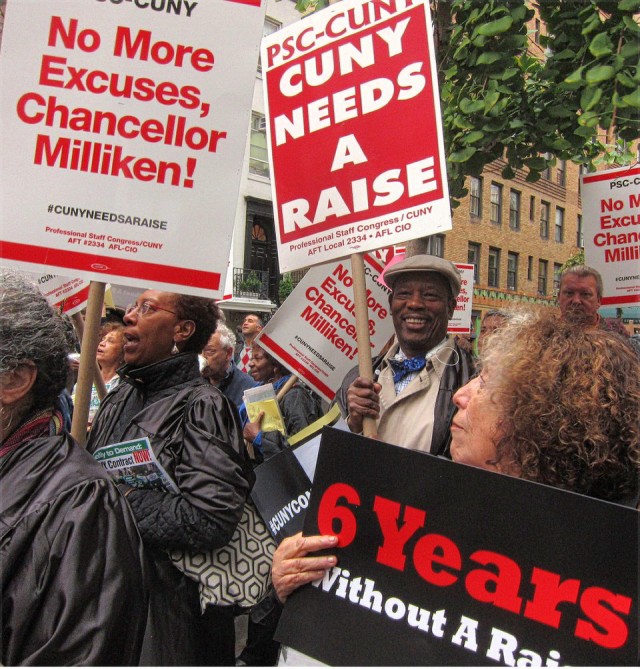 More than 1,000 union members and their supporters gathered in front of the Upper East Side apartment of City University Chancellor James Milliken at 8 a.m. on Oct. 1. There, they protested Milliken’s refusal to make an economic offer to the Professional Staff Congress, which represents City University of New York faculty and staff.

PSC members have been working without a new contract since 2010, although the old one remains in force under New York state law.

PSC President Barbara Bowen said that the failure to obtain economic justice for CUNY faculty and staff meant that their students — overwhelmingly Black and Latino/a, the daughters and sons of the poor and workers and from every immigrant community in New York City — did not get the education that they need and deserve.

More than 700 members of the PSC signed in, and there were delegations from the American Federation of State, County and Municipal Employees District Council 37, which represents CUNY clerical and administrative staff; the International Brotherhood of Electrical Workers; the Laborers union; the Union of Clerical, Administrative and Technical Staff at New York University; the Council of School Administrators; the United Federation of Teachers; the Transport Workers Union; the Hotel and Trades Council, DC 371 (social workers), the Utility Workers Union of America (Local 1-2 Con Ed); and the National Writers Union (UAW 1921). Some students from Hunter College, a nearby CUNY campus, attended.