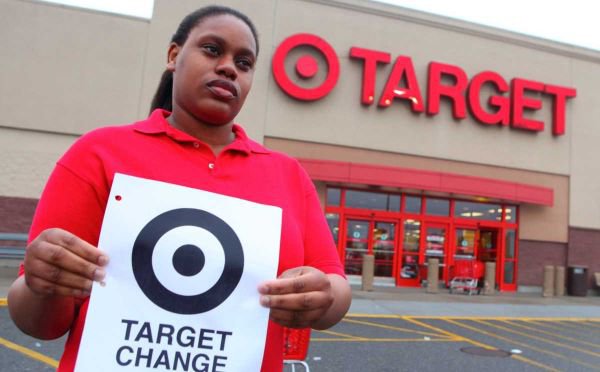 Pharmacy workers at a Brooklyn, N.Y., Target store have made history with the first ever successful union drive in the company’s more than 100-year history. On Sept. 8, the workers voted 7 to 2 in favor of joining the Food and Commercial Workers. Their major concern was job security, given CVS Health’s pending acquisition of Target’s pharmacy operations. “We were all happy with our jobs at Target. … It’s more that we didn’t like being thrown into uncertainty,” said a worker quoted anonymously. (nasdaq.com, Sept. 16)

This union drive is especially significant due to Target’s notorious union-busting scare tactics, including anti-union propaganda videos that all new employees are forced to watch. (Gawker.com, March 19, 2014) By proving that it’s possible to organize in even the most anti-union workplaces, these workers have set the stage for more Target and other low-wage workers to win union representation.

On Sept. 22, just two days before Pope Francis’ speech before the U.S. Congress, 1,000 federal service workers walked off the job to demand fair wages and a union. Organized by “Good Jobs Nation,” the workers who cook, clean and perform other essential services in the Capitol and other federal buildings struck for 24 hours, calling on Pope Francis to join their cause. ”We want you to know that even though we serve the wealthy and the powerful in the Congress, we earn so little that we live in utter poverty,” read the workers’ open letter to the pope. (TheHill.com, Sept. 22)

Although President Obama signed an executive order raising the minimum wage for federal contract workers to $10.10 in February 2014, workers say it isn’t enough. This wage — $21,000 yearly — still falls several thousand dollars short of the federal poverty line at $24,250 for a family of four. (TheNation.com, Sept. 22)

On Sept. 28, United Farm Workers celebrated the 50th anniversary of its founding in the fields of California with an announcement of long-fought-for rules protecting farmworkers nationwide from pesticide poisoning. In Washington, D.C., UFW President Arturo Rodriguez applauded the new U.S. Environmental Protection Agency rules that end decades of exclusion of farmworkers from when labor laws were first enacted in the 1930s. In those days, most farmworkers were African Americans in the South or Mexican and Filipino immigrants or Mexican Americans in California and Washington state.

The EPA estimates that 10,000 to 20,000 physician-diagnosed pesticide poisonings occur each year among about 2 million farmworkers. Over the years, farmworkers have fought for and won regulations in individual contracts against pesticides in Washington state, Texas and California. The first was with a California grape grower in 1967. The new EPA rule requires all pesticide applicators to be at least 18 years old, upgrades pesticide training requirements, enacts whistleblower protections and allows improved access to important health records.

“The same rules that have protected other American workers from dangerous cancer and birth-defect causing pesticides are finally going to protect farmworkers,” noted Rodriguez. “Our families and communities will now be able to work with reassurance that [their] work … will not unknowingly harm themselves or their families. It’s been a long time coming.”

On Sept. 22, Stewart Parnell, CEO of the Peanut Corporation of America, was sentenced to 28 years in jail for fraud and deliberately shipping tainted food. Nine people died and over 700 others became ill during a national outbreak of salmonella poisoning in 2008-2009 traced to the Georgia factory. Calling this sentencing “groundbreaking” and “a victory for consumers,” food safety lawyer Bill Marler said, “This sentence is going to send a stiff, cold wind through board rooms across the U.S.” (CNN.com, Sept. 22) If only it would put people before profits!

In a more typical scenario, corporate giant General Motors got a slap on the wrist on Sept. 16: a $900 million fine and a three-year deferred prosecution agreement after its Cobalts and Saturn Ions led to 124 deaths and 275 injuries between 2003 and 2008. New York Times columnist Joe Nocera advocated on Sept. 26 for prosecution for corporate executives as “the most powerful deterrent imaginable.” Under capitalism at a dead end? Not likely. Only with a socialist revolution!