Jorge Risquet Valdés-Saldaña, a leading figure in the formation of the Communist Party of Cuba and vital to numerous heroic efforts on the African continent, passed away on Sept. 28 at the age of 85.

Risquet was born on May 6, 1930, and joined the revolutionary youth movement in 1943. He was Cuba’s representative and head for Latin America in the World Federation of Democratic Youth and carried out an internationalist mission in Guatemala in 1954.

During the United States-supported Fulgencio Batista dictatorship in Cuba, he was kidnapped, tortured and incarcerated. He joined the Revolutionary Army in 1958 in the Second Frank País Eastern Front. 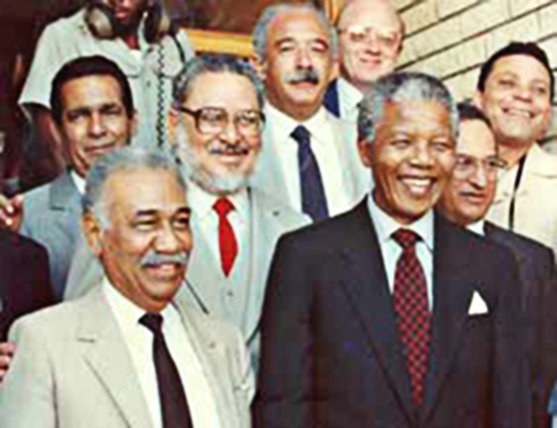 After the triumph of the Revolution, he held the positions of head of the Political Department and head of operations by the Army in the former Oriente province, Organization Secretary of the Provincial Committee of the United Party of the Socialist Revolution of Cuba in that province, head of the “Patricio Lumumba” Internationalist Battalion in Congo-Brazzaville, Minister of Labor, and head of the Cuban Civil Internationalist Mission in the People’s Republic of Angola between 1975 and 1979.

From the earliest days of its Revolution, Cuba expressed concrete solidarity with the African Liberation Movement. Racism was outlawed in Cuba, and its internationalist outlook permeated the foreign policy of the state.

In October 1960, when then-Premier Fidel Castro Ruz visited the United Nations General Assembly in New York, the revolutionary leader set up residence at the Theresa Hotel in Harlem. Castro met with Malcolm X, a leading figure in the Nation of Islam, along with enjoying a banquet with African-American workers at the famous hotel.

After the imperialists undermined the national independence struggle in the former Belgian Congo, Che Guevara, in an eloquent speech before the U.N., denounced the assassination of Patrice Lumumba, founder of the Congolese National Movement, and placed the guilt for this crime squarely on imperialism. In 1965 Guevara led a delegation of Cuban internationalists to Congo in an attempt to reverse the course of the counterrevolution.

Even though the Congo campaign was not successful in defeating the counterrevolution in that mineral-rich country, a decade later the Cuban government responded to a request by Agostino Neto, leader of the Popular Movement for the Liberation of Angola (MPLA), to assist the independence movement there in defeating an invasion by South Africa and the U.S. Central Intelligence Agency, which tried to install a puppet regime in the Angolan capital of Luanda. Between November 1975 and early 1976, some 55,000 Cuban internationalist troops were deployed to help the MPLA’s military wing defeat the South African intervention and consolidate Angola’s national independence.

Cuban military units remained in Angola for 16 years, fighting alongside the MPLA as well as the South West Africa People’s Organization (SWAPO), the People’s Liberation Army of Namibia and the armed wing of the African National Congress, Umkhonto we Sizwe.

The U.S. and its allies in Pretoria armed, funded and provided diplomatic cover for two Angolan political figures — Jonas Savimbi, of the National Union for the Total Independence of Angola (UNITA), and Holden Roberto, of the National Liberation Front of Angola (FNLA), which was based in Zaire, the new name given Congo after the triumph of the counterrevolution. UNITA proved to be the more formidable foe, since it was given direct assistance by the CIA and apartheid South African forces then operating in South West Africa (Namibia) prior to its independence in 1990.

The struggle in Angola reached its climax in 1987-88 with battles centered at Cuito Cuanavale, where the South African forces were routed and defeated. These battles would convince the racist regime in Pretoria and its backers in the Reagan and H.W. Bush administrations that a military defeat of the Southern African liberation movements was impossible.

A ceasefire was declared in late 1988, and firm negotiations were undertaken between the MPLA government in Angola and the apartheid regime. The U.S. and Pretoria did not want the Cuban government involved in the talks about the withdrawal of South African forces from southern Angola and the independence process in Namibia.

Nonetheless, due to the overwhelming support of the Organization of African Unity, now the African Union, and progressive forces internationally, the Cubans were not only allowed into the talks but played a prominent role. The central role of Jorge Risquet enhanced his international prominence, illustrating the significance of Cuba in the African revolutionary process.

Risquet led the Cuban delegation in the talks, which resulted in the withdrawal of the apartheid army from southern Angola and the liberation of neighboring Namibia after a century of settler-colonial occupation. Internationally supervised elections in Namibia in late 1989 led to the declaration of independence from apartheid on March 21, 1990, under the leadership of President Sam Nujoma of SWAPO, which won overwhelmingly.

The independence of Namibia and the ongoing mass and armed struggles in South Africa led by the ANC forced the removal of P.W. Botha as president of the apartheid regime and his replacement, F.W. DeKlerk. The new regime began to indicate that it was willing to negotiate an end to the political crisis in South Africa.

Beginning on Feb. 2, 1990, the ANC, the South African Communist Party and other previously banned organizations were allowed to function openly. Nine days later, Nelson Mandela was released after more than 27 years of imprisonment in the dungeons of the racist apartheid system.

Four years later the ANC won a solid electoral majority and took power in South Africa, sweeping out the dreaded system of apartheid. In a matter of less than two decades between 1975 and 1994, the system of white minority political rule in Southern Africa was soundly defeated with the profound assistance of revolutionary Cuba.

During a keynote address in September 2012 in Ghana honoring the 40th anniversary of the death of Kwame Nkrumah, Risquet outlined Cuba’s role in the African Revolution from the 1960s to the present period.

He stressed the ancestral ties between the people of Cuba and the African continent based on the Atlantic Slave Trade. He also paid tribute to the role Kwame Nkrumah, leader of the independence movement in Ghana and its first prime minister and president, for his role in the creation of the Organization in Solidarity with the Peoples of Africa, Asia and Latin America (OSPAAL), formed in 1966 at the Tri-Continental Congress in Havana.

“This was the understanding with which Cuban fighters came to ancestral Africa to fight side by side with the people against colonialism and the oppressive apartheid regime,” said Risquet. “For 26 years, 381,000 Cuban soldiers and officers fought alongside African populations — between April 24, 1965, when Ernesto Che Guevara and his men crossed Lake Tanganyika, and May 25, 1991, when the remaining 500 Cuban fighters returned home triumphant.”

He went on to point out, “Among these internationalists were three of the Five Anti-Terrorist Heroes currently held in the imperialists’ prison [now released]. Twenty-four hundred Cuban internationalist fighters lost their lives on African soil. Today we no more send soldiers. Now, we send doctors, teachers, builders, specialists in various fields.”

After his death, tributes to Risquet were delivered by the ANC of South Africa, the MPLA of Angola and other revolutionary parties and organizations throughout the world.