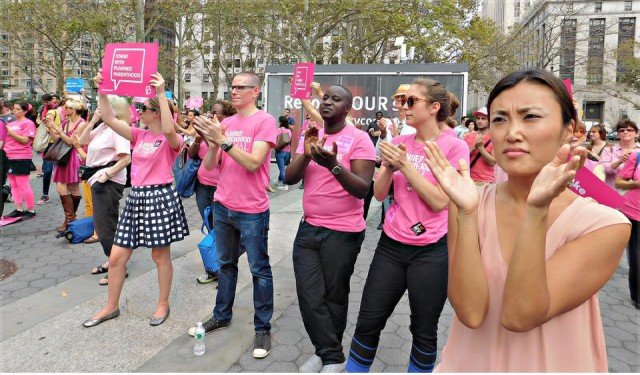 After vicious attacks by right-wing, anti-abortion politicians seeking to shut the federal government down on Sept. 30 if Planned Parenthood was not defunded, the organization asked supporters to hold public demonstrations and meetings all over the country on Sept. 29, #PinkOutDay, in a show of solidarity. In response, people organized events in more than 250 cities, towns and colleges on behalf of the largest provider of essential health care services for poor women in the U.S.

“We’re going to demonstrate just how many people across the country are willing to stand up and fight for women’s health and rights,” read a statement posted on istandwithpp.org. According to a poll conducted Sept. 24-28 by USAToday/Suffolk University, responses were 2 to 1 — 65 percent to 29 percent — in favor of continuing federal funding for Planned Parenthood.

A noon rally in New York City, attended by several hundred mostly women of all ages and nationalities, was held in Foley Square opposite the federal building. In addition to several city politicians, young women talked about the quality of services they received from Planned Parenthood and why the fight for reproductive rights was linked to the Black Lives Matter movement. Spoken-word poet, performance artist from Jamaica and lesbian-gay-bi-trans-queer rights political activist Staceyanne Chin roused the crowd when she detailed why women must have the right to choose to be mothers, based her own experience.