Durham, N.C. — A dynamic Black Lives Matter contingent of queer and trans* people of color, advancing behind the banner “No Pride for some of us without liberation for all of us,” disrupted the North Carolina Pride parade on Sept. 26. The action, carried out in Durham, was organized by groups from here and Greensboro. (Trans* indicates the spectrum of all the different genders of people who do not conform to the either/or of male/female.) 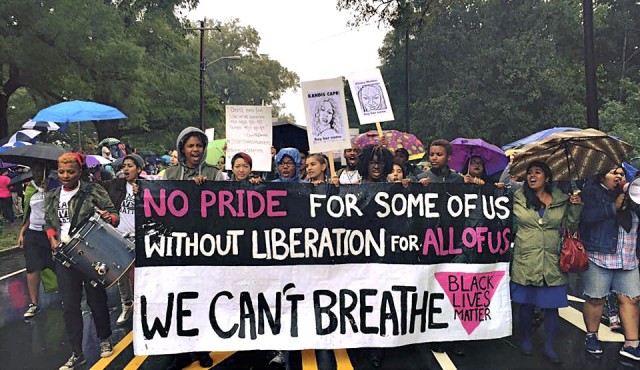 As the contingent marched, members chanted the searing lyrics of R&B singer Janelle Monae’s protest song against racist police terror, “Hell You Talmbout.” Participants drummed and shouted out the names of murdered Black queer and trans* women. This year, as of September, at least 17 trans* women of color have been killed in the U.S., an historically high rate.

On reaching the corner at Main and Broad where participating groups were announced, the contingent asked for and received the microphone to read a statement in solidarity with the murdered women. However, they were told by a Pride official, “Don’t say anything offensive.”

In Facebook posts, BLM Youth Assembly organizer Ngoc Loan Tran described the events after the group began to read: “The MC intervened and brought security and cops to confront us, put hands on queer Black people speaking, and stopped us from reading our statement, apparently deciding that the fight for Black lives is offensive. … Murdering queer and trans Black people without remorse is offensive; trying to separate struggle from celebration is offensive. Be loud, don’t be quiet! The first Pride was a riot!”

Stonewall and transgender women of color

Stonewall was the lesbian-gay-bi-trans*-queer six-day uprising against police repression in New York in June 1969. That fightback resistance was led by transgender women of color, like Marsha P. Johnson of African descent and Latina Sylvia Rivera, as well as by butch lesbians, teenage street hustlers, drag queens and homeless gay men. Stonewall is popularly designated as the modern-day start of the U.S. LGBTQ movement.

In a statement, “Why we disrupt Pride,” issued after the march, BLM organizers declared: “Our Pride was birthed by our Queer and Transgender ancestors … Black and Brown people [who] chased the police off of our turf. Your Pride has a police escort. Our Pride took the streets by storm to protect gender nonconforming people.”

The statement pointed to the deep contradiction between the original Stonewall militancy and the current NC Pride celebration: “Your Pride is sponsored by banks and corporations that cage, murder and enslave Black and Brown Queer and Trans folk,” including “kindred locked back in the Durham County Jail, denied urgent medical care, reading material, clean drinking water, and even a fundamental right to sunlight.”

A major corporate sponsor of NC Pride is super-bank Wells Fargo, which has made millions in loans to the for-profit Corrections Corporation of America. Other corporate sponsors include Bud Light and PepsiCo, environmental polluter Allied Chemical and pharmaceutical giant GlaxoSmithKline.

Jessica Jude, a BLM Youth Assembly organizer, said of the protest: “I have marched down the streets chanting in many cities for lots of reasons. This was the first time I realized how important it was that this group of people be there at this moment, asking the spectators to take a side. We were bringing together points of solidarity with the oppressed, from Ferguson to Palestine to the roots of Pride, and exposing corporate sponsorship and police violence against Black Power. We were challenging the comfortable in an important way.”

White NC Pride leaders committed a terrible, shameful failure of solidarity and an act of racism when they interrupted the Black Lives Matter contingent, threatened its members physically and called in the police.

At a celebration of Stonewall, the historic LGBTQ fightback battle that was led by trans* women of color, white NC Pride organizers sought to repress, with their own physical coercion and using state power, a people-of-color queer and trans* contingent that embodied the spirit of that Stonewall resistance, fighting back against racism, homophobia, transphobia and woman hating.

They were offering a chance for the LGBTQ movement to widen and strengthen itself in the larger struggle for justice.

The Black Lives Matter protesters made very clear the opposing positions of repression and liberation as they stood at the intersection of Main and Broad. They quite succinctly posed the question: Which side are you on? This is the question that each person — and each movement — must answer in order to stay correctly on the road to solidarity and liberation.