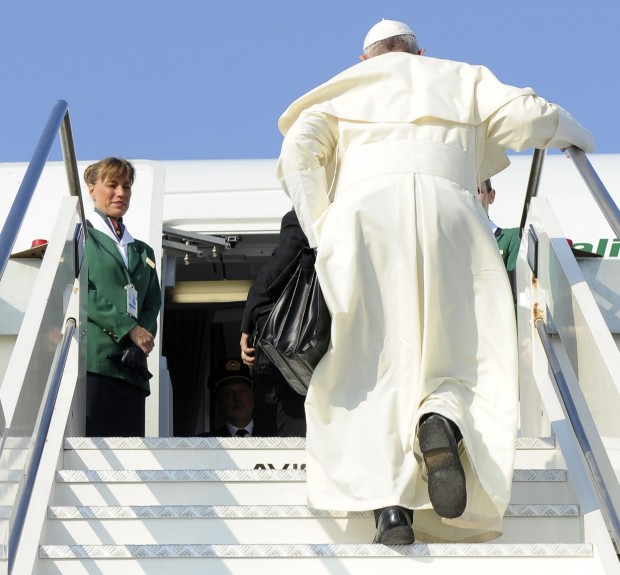 At a time when the U.S. capitalist political establishment is in crisis, how comforting it must have been for virtually all the warring camps to come together in effusive praise for Pope Francis and his talk to the U.N. conference on Millennium Development Goals.

The pontiff’s visit was received with a level of media coverage that a rock star could only wish for. No presidents, generals, corporate heads or groundbreaking scientists could ever achieve one-tenth of the coverage accorded the pope.

While the domestic news had been dominated by protests over police killings of unarmed Black people, corruption on Wall Street, the widening gap between rich and poor, the drought and raging wildfires in the West, the vicious Republican debates and the gridlock in Congress, the international news had been even more painful, with unending wars in the MIddle East and the resulting mass exodus of hundreds of thousands of desperate people to Europe.

But with the visit of Pope Francis, the capitalist media now had the opportunity to offer people who suffer themselves, or identify with the suffering masses, some hope, which was of course expressed only in generalities.

Francis’ speeches were full of eloquent concern about the fate of the Earth, the suffering of migrants and the growth of poverty amid obscene wealth. This is what people want to hear more about, and his words went beyond the messages of his predecessors at the pinnacle of the Catholic Church. Undoubtedly, there are many who hope it will propel forward their struggles for reform in these areas.

Given the church’s reactionary positions on divorce, contraception, abortion and lesbian-gay-bi-trans*-queer rights, nothing that Francis said challenged the Vatican’s age-old role as a world pillar of male domination and the consigning to hell of all who dare challenge it.

It should be obvious that the U.S. big-business media, from the lofty, globally conscious New York Times and Washington Post to the frenetically right-wing Fox media conglomerate, all speak for various elements of the U.S. capitalist ruling class. Even the most liberal never go beyond criticism and editorial positions intended to patch up and prettify this increasingly monstrous system. Far be it for any of them to ever side with those who advocate a revolutionary solution to the gangrenous decay of outmoded capitalism.

Their enthusiasm for the pope’s pronouncements, therefore, must be seen in the context of present-day struggles. Here in the United States, these struggles are becoming more acute as the exploitation of the working class and the even fiercer oppression of its most downtrodden sections — people of color and immigrants — have aroused a significant section of the population. The young especially are showing outright defiance of the state and its repressive functions, especially in relation to police violence and mass incarceration.

Role of Catholic Church in history

While the Catholic Church is a powerful worldwide institution with a long history, which has amassed extreme wealth over the centuries, its influence today should not be exaggerated. The church has been in decline for many years, especially in Europe where it has roots.

It was long ago superseded in Europe and the U.S. by various Protestant religions, whose struggle with the Catholic Church had its origins in the rise of the bourgeoisie versus the feudal lords. The Enlightenment period rejected Catholic dogma and opened the way for the development of science and industry, pillars of early capitalism.

With the development of capitalism into its imperialist stage, however, commercial and industrial capital began taking a back seat to increasingly powerful banks and other financial institutions. The growing world economy was dominated mainly by “WASPs” — white, Anglo-Saxon Protestants from Europe and North America — who ruled through such institutions as the World Bank and the International Monetary Fund.

The past century saw many challenges to imperialist rule. Most notable were the revolutions in Russia, China, Korea, Vietnam and Cuba that overturned capitalist property relations and aimed at building socialism. Facing problems of extreme underdevelopment and unremitting hostility from the imperialists, these revolutions were secular and summoned the efforts of the masses of people to improve conditions, rather than seek the help of a supposed higher power.

In Eastern Europe, where the upending of the old social order came through the military defeat of Nazi Germany and its collaborators by the Soviet Red Army, rather than by popular revolutions, the Catholic Church became a conduit for counterrevolution. Pope John Paul II, a Pole, played a notable part in the return of East European countries to the fold of global capitalism. But while this earned him and the church great praise from non-Catholics in the bourgeoisie, especially in the U.S., that has not reversed the historically declining fortunes of the Vatican.

The rise of the women’s movement and the concomitant struggle for reproductive choice, as well as revelations of child sexual abuse by a supposedly celibate Catholic clergy, plus an influx of people from other nationalities and religions, have led to a decline in the influence and finances of the church, especially in Western Europe.

Today, there are more practicing Muslims in France than there are practicing Catholics. And in Italy, home of the Vatican, those who attended Mass every Sunday in 2010 made up less than 5 percent of the population; the figure was even lower for youth. (Center for the Study of New Religions)

The Church and Liberation Theology

In Latin America, however, the situation is more complex. Beginning in the 1960s, the struggle of the masses against brutal dictatorships, which were propped up by the U.S. with arms and money, shook the Catholic hierarchy and attracted many priests and nuns who were closest to the poor.

A new brand of Catholicism, Liberation Theology, put emphasis on raising up the most oppressed and was sympathetic to revolutionary forces in the hemisphere, including the Cuban Revolution. Some of its advocates participated in armed struggles against the repressive regimes. Priests and nuns in this movement became targets of the dictators, most notably in Central America, Argentina and Brazil, and the movement itself was denounced by the Vatican.

Jorge Mario Bergoglio, the present Pope Francis, is from Argentina. He was not part of this progressive, even revolutionary, movement that reached into the clergy.

The military in Argentina launched a coup in 1976, supported by Washington, and then carried out a vicious war against the left in which thousands were “disappeared.” The military eventually had to accede to a return of civilian government.

It was Pope John Paul II who anointed Bergoglio a cardinal in 2001. When Bergoglio became pope two years ago, information surfaced about the complicity of the Argentine church with the crimes of the generals. Bergoglio was accused of not having used his position — he had been a bishop at the time of the “dirty war” — to save priests and others imprisoned by the junta. (Time, “The New Pope and Argentina’s ‘Disappeared’ of the Dirty War,” March 13, 2013)

Bergoglio’s ascension in the church to the position of pope reflects the new reality since that time. Throughout Latin America, there is little sympathy for the reactionary forces that were lined up with U.S. imperialism in the period of multiple military coups and vicious dictatorships, from Venezuela and Chile to Guatemala and Paraguay. Even the corrupt and murderous political establishment in Colombia has had to sit down in Havana with the Revolutionary Armed Forces of Colombia (FARC) and negotiate an end to the war there.

The new pope is able to articulate the sentiments of the masses of oppressed people with great passion and seeming humility. Yet the institution he represents, except for a small and valiant grouping in it which he has distanced himself from, has been opposed to the struggles of the people to take control over their lives in the now, not the hereafter.

By praising the pope to the skies, we can assume that the capitalist establishment in the U.S. is eager to cloak itself in his present popularity and promote the church as a force for change.

That is a far cry from being committed to any meaningful struggles that could make a dent in imperialist wars abroad or the economic aggression known as “free trade” — both of which result in devastation that is driving millions to leave their homes. Nor will it reverse the amassing of fabulous fortunes at one end of the class divide and abject poverty at the other.

To do this — and to respond seriously to the hair-raising predictions about the future of this planet — requires a massive showdown with the class of super-rich who at present control most of the world.