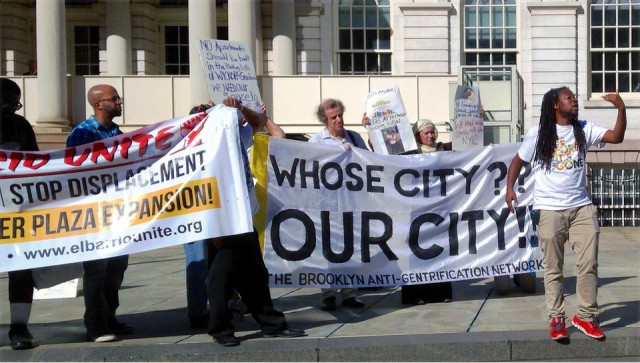 A full day of marches, rallies and events were held in New York City on Sept. 17, the fourth anniversary of Occupy Wall Street, to demand an end to racism, gentrification and police brutality. Called by the Brooklyn Anti-Gentrification Network, the day’s events involved early morning rush-hour visibility and information actions and a midday protest in front of the New York City Housing Authority’s management office in Farragut Houses complex in Brooklyn, called by Families United for Racial and Economic Equality. It also included an action at the New York City Department of City Planning to “fight the rezoning of our communities,” a march across the Brooklyn Bridge and, finally, a speakout and sleepout at City Hall Park in Manhattan, called by Voices of Community Activists & Leaders.

In an email announcing the event, BAN states, “The corporations, banks, real estate developers and de Blasio administration are hell-bent on destroying the cultural, economic and social diversity of New York City. We must disrupt business as usual and take back our communities.