At the end of August, long-simmering tensions within the motley coalition of wealthy oligarchs, pro-Western neoliberal politicians and outright fascists that make up the pro-Western Ukrainian regime based in Kiev boiled over in an unprecedented wave of violence. 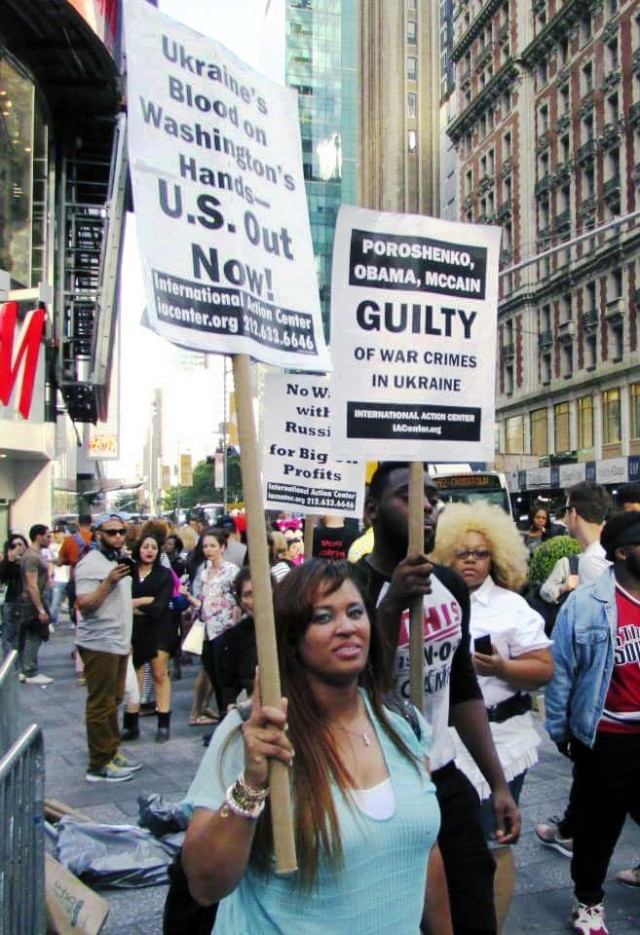 In Kiev, Ukraine, thousands of neo-Nazis staged a violent riot outside the Verkhovna Rada, or parliament, on Aug. 31. Two National Guard troops and one police officer were killed. Over 100 people were injured, including Deputy Interior Minister Vasyl Paskal. Thirty people were arrested. (The Telegraph, Aug. 31)

Ihor Humeniuk, himself a National Guard soldier, was arrested for throwing a grenade that killed a fellow National Guardsman. Ukrainian Interior Minister Arsen Avakov claims that Humeniuk confessed “and introduced himself as an [openly pro-fascist] Svoboda party member and a Sich battalion fighter, on leave from Aug. 3 to Sept. 3.” (UNIAN News, Aug. 31)

Photos quickly surfaced on social media of the suspect posing with fascist paraphernalia, including the racist Confederate flag of the U.S.

Ironically, Avakov established the National Guard in spring 2014 to incorporate neo-Nazi paramilitary gangs into Ukraine’s state apparatus. The alleged goal at that time was to use the fascists as shock troops against the left and against the people in the Russian-speaking regions. But they were supposed to remain under the discipline of the neoliberal regime.

In the days that followed the Aug. 31 riot, ultraright protests spread to Odessa, Kharkov and other cities. Avakov was allegedly targeted for assassination by the commander of the Svoboda volunteer battalion, Andrey Yangolenko. The Security Service of Ukraine claims to have foiled the plot. (Fort Russ, Sept. 11)

The trigger was a face-saving move by Ukrainian oligarch and President Petro Poroshenko. Under pressure from his patrons in Washington and the European Union, Poroshenko aimed to preserve the Minsk 2 ceasefire process with Russia by adopting constitutional changes that give the illusion of autonomy to the rebellious Donbass mining region. In exchange for autonomy, the Donbass was to remain within the national framework of Ukraine.

But below the surface, Ukraine’s deepening economic crisis, painful austerity measures, and subservience to Western banks and U.S.-NATO military power are fueling the junta’s internal contradictions.

As the fascist riot erupted, Kiev, the U.S. and NATO began their provocative “Operation Sea Breeze” war games in the Black Sea, targeting the Russian Federation. “Sea Breeze,” incorporating Ukrainian military forces from the Odessa and Nikolayev regions, is being called the largest exercise in NATO history. (Novorossia Today, Aug. 31)

Siege of the Rada

The current Ukrainian regime came to power in the wake of protests dominated by the same fascists, and backed by the U.S. government, which toppled the lawfully elected government of President Viktor Yanukovych in early 2014.

People in the primarily Russian-speaking Donbass region, formerly part of eastern Ukraine, broke away after the coup and established the independent Donetsk and Lugansk People’s Republics. Anti-fascist militias there have repeatedly defeated Kiev’s military incursions.

Since signing a ceasefire agreement in Minsk last winter, Poroshenko’s government has failed to meet any of its Minsk 2 requirements, while continually violating the truce and targeting civilians in Donbass.

Nearly 7,000 people have died since the start of Kiev’s “Anti-Terrorist Operation,” according to the United Nations.

Fascist groups and volunteer battalions form the backbone of Kiev’s war machine. These ultraright forces are infuriated by the current diplomatic maneuvering. Instead, they demand an immediate resumption of full-scale genocidal war against the rebellious Donetsk and Lugansk republics — and against Russia too.

The Aug. 31 protest was led by the head of Svoboda, Oleh Tyahnybok, a major figure in the 2013-2014 “Euromaidan” movement that unseated Yanukovych. The Right Sector, Oleh Lyashko’s Radical Party and Ukrop also took part. Many protesters were active duty members of volunteer battalions.

Inside the Rada, the ultraright Lyashko and other Radical Party deputies shouted “Shame!” in an attempt to drown out the speaker of parliament as he introduced Poroshenko’s draft amendments.

In the end, Poroshenko’s proposal was adopted by 265 deputies (out of 450). It must be approved twice more before going into effect. (112.international, Sept. 2)

Emphasizing that the measures were for show only, “Parliament speaker Volodymyr Hroysman was adamant that the [draft constitutional changes] would not mean special status for Donetsk and Lugansk.”

And two days before the vote, Poroshenko himself was quoted as saying, “No matter how you look for it there, there is no special status.” (Russia Beyond the Headlines, Aug. 29)

Representatives of Donbass harbored no illusions.

“As of today, no point of the Minsk agreements has been fully implemented by Kiev,” declared Alexander Zakharchenko, head of the Donetsk People’s Republic. “Military hardware has not been withdrawn from the engagement line; moreover, its number has been increased, while the law on amnesty has not been adopted by the Verkhovna Rada.”

Zakharchenko stressed that according to Minsk 2, Kiev should negotiate with the Donbass republics on changes to the constitution.  Instead, “Kiev has made no steps forward and has issued openly provocative statements,” he said. Poroshenko has refused any direct discussions.

“As regards the constitutional reform in the sphere of decentralization — it can’t be called anything but a farce,” said Zakharchenko. “That law, which has already led to the deaths of people in front of the Rada, is not only out of line with the Minsk agreements, but directly contradicts them.” (Novorossia Today, Sept. 2)

Kiev’s infighting led to a rare period of relative peace in the Donbass republics in early September. The capital city of Donetsk, for instance, saw several nights without shelling for the first time in months.

However, attacks by Ukrainian forces continue against frontline towns and villages. On the night of Sept. 13-14, the villages of Spartak and Avdeevka were attacked, Novorossia Today reports.

And more than 90,000 Ukrainian troops and massive amounts of military hardware supplied by NATO remain poised on the “contact line” with Donetsk and Lugansk, awaiting the signal for a new offensive.

Ukraine’s economy is wracked by crisis, with the gross domestic product expected to fall 9 percent this year. Inflation is projected at 47 percent for 2015, and exports to both the European Union and Russia are in freefall. (NewColdWar.org, Sept. 7)

On Aug. 27, four Western banks agreed to a 20-percent reduction of their portion of Ukraine’s sovereign debt in order to prevent the country’s default (bankruptcy). This “haircut” provided immediate debt relief of $3.6 billion and extended Kiev’s repayment schedule for a new $11.5-billion International Monetary Fund loan by four years.

“The IMF and United States put bondholders under intense pressure during the five-month negotiations to accept short-term losses,” noted an Agence France-Presse report Sept. 6, “in return for preventing Ukraine’s pro-Western leaders from being forced into resuming their reliance on Russia.”

Altogether, the IMF has pledged $40 billion to Ukraine since the coup. Most of this money is being pumped into the war effort, while austerity measures are piled on the working class.

“The government has already raised long-subsidized energy prices, secured a debt-relief deal last month, and is in the final stages of setting up an independent anti-corruption agency with broad powers,” reported the Wall Street Journal on Sept. 7.

“To encourage Ukraine’s efforts, the U.S. has signaled it is prepared to offer another round of billion-dollar loan guarantees if Kiev keeps the bailout program on track,” according to the Journal.

According to a poll conducted in late July by the Ilko Kucheriv Democratic Initiatives Foundation: “Basically every Ukrainian felt the consequences of the current financial-economic crisis: 59 percent very seriously, and another 37 percent to a certain degree. The main economic consequence of the crisis for the majority of the population was the rise in prices (75 percent) and the reduced purchase of clothing and other items (72 percent) associated with this, the decrease in consumption of food products (67 percent) and the limitation of purchase of medications and medical services (55 percent). Every fourth citizen felt a reduction in wages.”

“The overwhelming majority of Ukrainians do not believe in the success of reforms that the government is trying to implement: 32 percent have certain hopes, although they do not believe that this will happen, and 30 percent are totally hopeless. However, only 30 percent on the whole believe that reforms will be successful.” (NewColdWar.org, Sept. 12)