Ahmed Mohamed is a ninth-grader of Sudanese descent who attended MacArthur High School in Irving, Texas. When he brought a digital clock he had made to his classroom on Sept. 14, police interrogated him, arrested him, took him away in handcuffs and fingerprinted him. The school administration suspended him for three days. 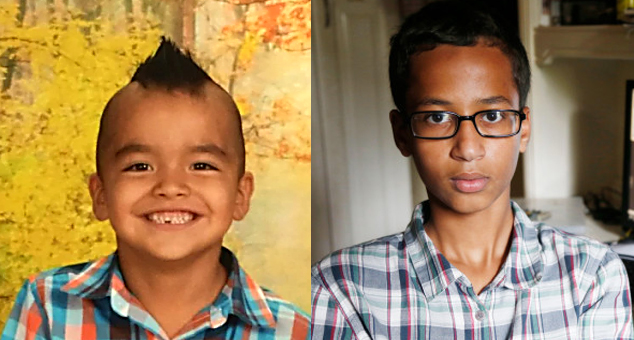 Why did this traumatic event happen to a young man considered by many to be a brilliant inventor? From initial reports, school officials, including Mohamed’s English teacher, said the clock looked like a “bomb.” Telling teachers it was not a bomb did not prevent the young student’s arrest. However, the truth began to come out within days — this 14-year-old was targeted due to his nationality and his Muslim faith.

Mohamed Elhassan Mohamed, the youth’s father, stated that his son was a victim of Islamophobia. “He just wants to invent good things for mankind.  But because his name is Mohamed and because of September 11, I think my son got mistreated.” (Washington Post, Sept. 16)

The Irving police, who continually asked him about his name during their interrogation, stated that Ahmed will be not charged with any crime. However, they have not offered a public apology; neither have school officials.

In a statement justifying Mohamed’s arrest, Lesley Weaver, Irving Independent School District spokesperson, wrote, “We always ask our students and staff to immediately report if they observe any suspicious items and/or suspicious behavior. If something is out of the ordinary, the information should be reported immediately to a school administrator and/or the police so it can be addressed right away. We will always take necessary precautions to protect our students and keep our school community as safe as possible.” (WaPo)

It’s outrageous that a student bringing an invention to school was deemed a “threat.”

However, there has been a lot of support and solidarity on Twitter at the hashtag #IstandwithAhmed, including from President Barack Hussein Obama, who has faced racism due to his name.

Ahmed Mohamed is not the only youth of color who has been demonized by racism recently. Jakobe Sanden, a 7-year-old Indigenous youth, was sent to the principal’s office at his school in Santa Clara, Utah, during the week of Sept. 14 for having a traditional Mohawk haircut worn by his people, the Seneca Nation. Rex Wilkey, the assistant superintendent for primary education, wrote that Sanden’s haircut was “possibly in violation of the school district student grooming policy.” (WaPo, Sept. 19)

Ironically, the name of Sanden’s school is “Arrowhead,” another example of racist stereotypical names and images of Native people used notably by professional sports teams in Washington, D.C., and Cleveland.

What happened to Jakobe is a current reminder of what happened to so many Native children starting in the late 19th century, who were forced to attend racist, Westernized schools in an attempt to rob them of their culture and heritage. These schools were an extension of U.S. genocidal policy based on the theft of Indigenous lands to expand capitalism in the West.

Seneca Nation Tribal Councilor William Canella wrote a letter to the school district’s superintendent that reads, in part, “It is common for Seneca boys to wear a Mohawk because after years of discrimination and oppression, they are proud to share who they are. It’s disappointing that your school does not view diversity in a positive manner, and it is our hope that Jakobe does not suffer from any discrimination by the school administration or faculty as a result of his hair cut.” (WaPo, Sept. 19)

Such abuse suffered by Jakobe and Ahmed at their young ages can cause long-term psychological damage as adults.

Jakobe should be defended and supported for exhibiting his right to express pride in his Indigenous roots, as should Ahmed for his right to be Muslim without fear of reprisal.

The racist war against children, no matter their nationality, religion, status or age, can take many forms. Take the example of Tamir Rice, the 12-year-old African-American youth who was ruthlessly, fatally shot in Cleveland last November by white police officers. His crime? Having a fake BB gun. Tamir has become a poster child for the Black Lives Matter movement.

What ties millions of youth like Ahmed, Jakobe and Tamir together is that this capitalist system offers no viable future for them. For this reason alone, it cannot be reformed.