A wholesale racist, sexist, anti-worker, anti-poor assault on Planned Parenthood is going on. This is outright warfare against millions of women in the U.S. — predominantly women of color, immigrants, youth, rural residents and women with disabilities, who are the lowest paid workers, often single mothers struggling to keep their families together. Some have called the attack “political theater,” but that downplays its seriousness. It is a vicious 21st century witch-hunt. 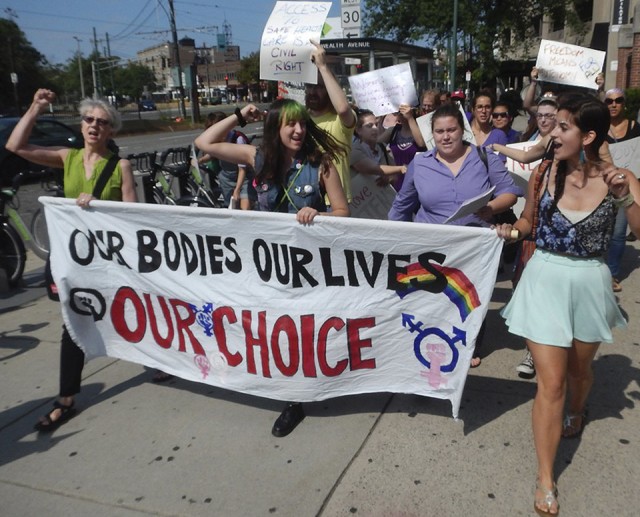 A fire heavily damaged a Planned Parenthood clinic in Pullman, Wash., on Sept. 4. The local fire department, with other local officials and federal agencies, ruled it was deliberately set. No authorities have called the arson what it really is — domestic terrorism.

“[The fire is] a predictable ripple effect from the false and incendiary attacks that fuel violence from extremists,” said Karl Eastlund, CEO of Planned Parenthood of Greater Washington and North Idaho. (Associated Press, Sept. 5)

There is a long history of anti-abortion violence in the Pacific Northwest, DuVergne Gaines, national clinic access project director at the Feminist Majority Foundation, told RH Reality Check. She noted that a group of anti-abortion extremists held a conference, hosted by the racist, so-called International Coalition of Abolitionist Societies, in northern Idaho two months before the fire. Leaders included justifiable-homicide advocate Matthew Trewhella, founder of Missionaries to the Preborn and a convicted arsonist; Rusty Thomas, director of Operation Save America, who was jailed for destroying clinic property after gaining entry in his police uniform; and members of Abolish Human Abortion. (Sept. 9)

In 1996, a Planned Parenthood clinic in Spokane Valley, Wash., was bombed. The four men convicted were in a white supremacist, anti-abortion group. Both perpetrators of destruction at independent clinics in Missoula, Mont. (firebombed in 1993), and Kalispell (severely vandalized in 2014) were convicted.

Vicki Saporta, president of the National Abortion Federation, which regulates abortion providers, told the Huffington Post, “In my 20 years at NAF, I have never seen such a volume, intensity and escalation of hate speech, threats and criminal activity.” Death threats against providers should be taken seriously, warned HuffPost, considering that eight doctors and clinic workers have been murdered — the latest was Dr. George Tiller in 2009 in Wichita, Kan.

When hostile pickets were held at 300 Planned Parenthood clinics around the country on Aug. 22, about 500 protesters gathered in Pullman to call for Congress to defund the largest provider of women’s reproductive health care for poor women in the country. The Christian right-wingers have been fired up by ultra-right Republican politicians, who have been trying to defund the organization nationally since 2011.

Currently 28 House Republicans have vowed to make defunding Planned Parenthood grounds for shutting down the government when the budget comes up for a vote on Sept. 30. While Democrats say no such bill will pass in the Senate, President Barack Obama says he would veto it. (HuffPost, Sept. 8)

Those who oppose Planned Parenthood say that if the organization is defunded of $528 million for Medicaid health care services for poor women — contraception and counseling, sexually transmitted infection testing and treatment, and breast exams and other cancer screening — many health care providers will fill the bill. Not so says a Guttmacher Institute study, issued Sept. 8 in response to a Congressional Budget Office request, based on the latest 2010 statistics.

In two-thirds of the 491 counties where its clinics are located, Planned Parenthood serves at least half of all women obtaining contraceptive care. In a fifth of the counties it serves, it is the sole safety-net family planning center. The study points to Texas as a “cautionary tale;” the state family-planning program for low-income women “served far fewer women” after Planned Parenthood clinics were cut from the rolls.

Push is coming to shove in Louisiana. After the governor defunded Planned Parenthood, the organization sued the state to prove it could help poor women. The state produced a list of 2,000 family planning providers who could take new patients. After viewing the list, which included dentists, nursing home caregivers and cosmetic surgeons, the judge cut it to 29. At a Sept. 2 hearing, the judge was reluctant to allow Planned Parenthood’s contract to expire on Sept. 15 because “the state hadn’t articulated a good reason for doing so.” (Mother Jones, Sept. 10)

The Sept. 9 Congressional hearing, entitled “Planned Parenthood Exposed: Examining the Horrific Abortion Practices at the Nation’s Largest Abortion Provider,” was called a “farce” by Rep. Jerry Nadler (D-NY). No witnesses were called from either Planned Parenthood or the so-called Center for Medical Progress, which created the deceptive videos.

Pro-choice views were represented by Priscilla Smith, director of Yale Law School’s Program for the Study of Reproductive Justice. Smith observed that the health care provider has been the target of nine sting operations over the past 15 years and has never been indicted. “The horrible irony here is that defunding Planned Parenthood would increase the number of unintended pregnancies and drastically, I fear, increase the number of abortions.” (RHRC, Sept. 10)

Just as firebombing the clinic in Washington state should be called domestic terrorism, defunding Planned Parenthood is class warfare because it would deny poor women their right to essential, needed medical care — their human right to control their very lives. It’s time for all progressives to defend Planned Parenthood and demand reproductive justice for all women.

Kathy Durkin contributed to this article. Davis is a longtime reproductive justice activist and author of the pro-choice novel “Love Means Second Chances.”