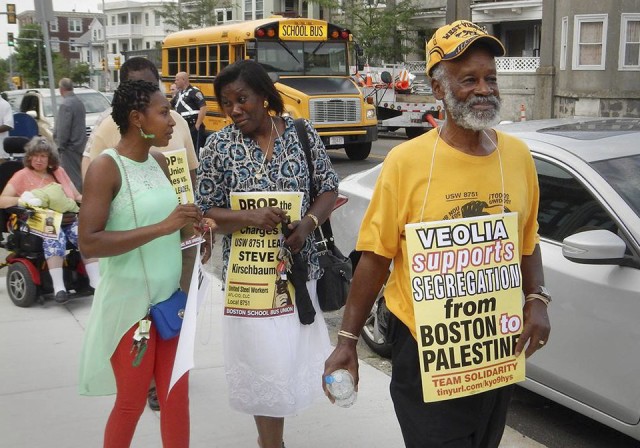 In 2009, the U.N. Human Rights Council described the light rail project as “built to service the settlements.” The rail was designed to connect the western part of Jerusalem with the Israeli settlements surrounding the city in the occupied West Bank. These settlements were built in violation of international law.

This was the last and final in a series of withdrawals/sales Veolia has made in Israel and the Occupied Territories. It follows the sell-off of Veolia’s energy, water and waste businesses there in April to the private equity firm Oaktree Capital Management. In September 2013, Veolia had sold its local bus services subsidiary to the Afikim Company. Veolia’s bus company had transported Israeli settlers to the illegal West Bank settlements, while excluding all Palestinian towns and riders.

Veolia acquired a damaging and toxic reputation for its involvement in Israel, which included transferring waste from Israel to occupied Palestinian land in the Jordan Valley along with its transportation companies.

The bigger they are, the harder they fall! 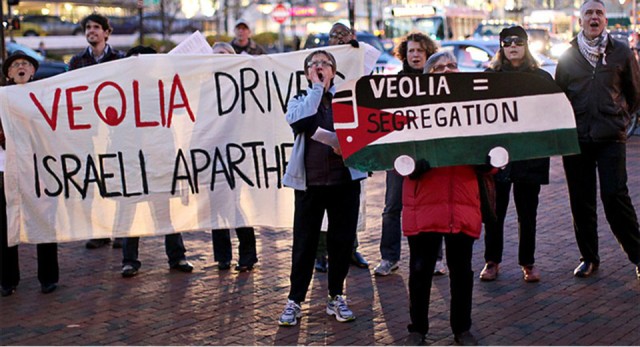 According to the Sept. 1 Newsweek, “The BDS movement has waged a seven-year boycott campaign against Veolia — a company that employs 179,508 people and boasts a market capitalization of $10.9 billion — and claims that lost contracts across Europe and the U.S. have cost the company approximately $20 billion.”

Additionally Morningstar online reported that between 2010-13 Veolia lost or withdrew from waste contracts worth over $15 billion worldwide.

Riya Hassan, the European coordinator of the Boycott Divestment and Sanctions National Committee, said, “Veolia is still a target for union activists, environmentalists and anti-privatization campaigners, due to its record of anti-labor policies and involvement in the privatization of public water. All those still being affected by Veolia’s policies and struggling for accountability and reparations can continue to count on our solidarity. The BDS movement takes cross-struggle solidarity to heart.”

Workers World spoke with Lara Kiswani, executive director of the Arab Resource and Organizing Center, about her group’s victory. “It is becoming clearer to the world,” said Kiswani, “that the partnership between the U.S. and Israel is central to global policing and repression. The impact on workers and Black and Brown communities has made it easy for grassroots organizing to connect the dots and build power across movements. 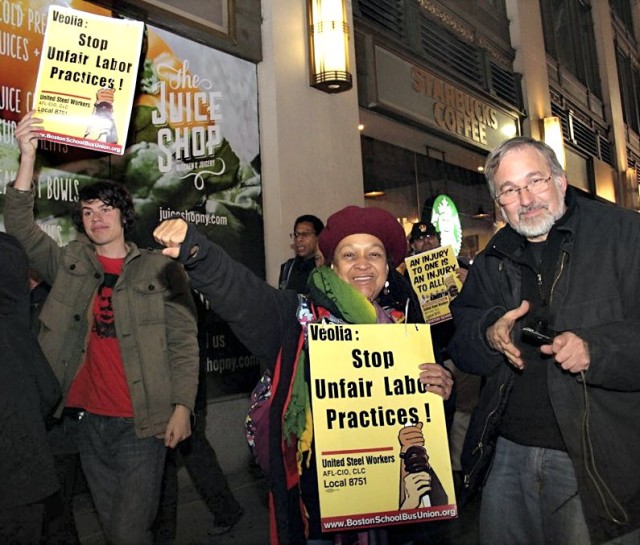 Pam Africa with Steve Kirschbaum, one of leaders of the Boston school bus drivers union fired by Veolia.

“The enormous Boycott, Divest and Sanction victories are a reflection of just that. It is no longer OK for Israel to do business as usual anywhere. State violence is being challenged everywhere. The accomplishments of the Veolia campaign are a win for all those fighting for dignity and justice in the workplace, in the schools and in the communities.”

Finally, addressing the struggle of the Boston School Bus Drivers union, United Steelworkers Local 8751 against Veolia/Transdev, Kiswani added, “The Arab Resource and Organizing Center salutes the Boston school bus drivers in their fight for justice. We know all too well the role that corporations such as Veolia play in facilitating and perpetuating oppression and colonial violence globally. The Palestine solidarity movement has fought them and won. And we know that the bus drivers’ demand for equity in education and in the workplace is a struggle of all people, and a struggle that will be won.”