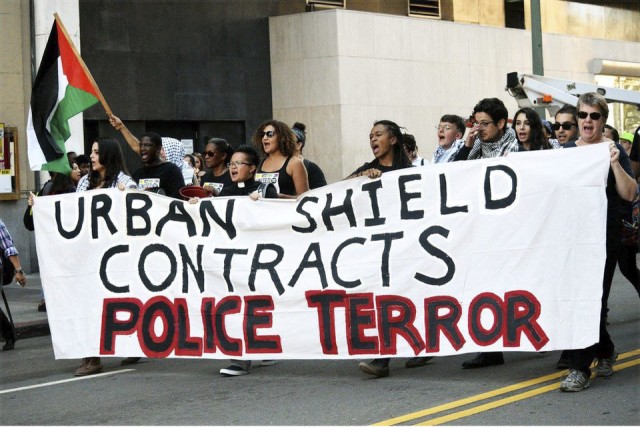 Oakland, Calif. — Urban Shield, a million-dollar expo for training and sales of military hardware to local police departments, was kicked out of Oakland last year after militant community actions including street blockades. This year, the four-day event, called “the largest tactical exercise in the nation” for domestic war games, retreated to the county fairgrounds in Pleasanton, Calif., but drew continued protests on Sept. 11.

Several hundred people took over the intersection outside the Alameda County Sheriff’s office for 90 minutes of guerrilla theater, music and speeches to denounce Urban Shield, which trains about 5,000 people from 100 agencies, including SWAT team tactics. A 13-year-old Latina girl took the mic to tell how a police SWAT team raided her home at 4:30 a.m. and searched a baby sibling. “As soon as I hit the door, I opened it, they started screaming at me to put my hands up, pointing rifles at me,” she said. “It seemed like a movie.”

The Stop Urban Shield Coalition, which includes the Arab Resource & Organizing Center, the Anti-Police-Terror Project, Bayan, Code Pink, Occupy Oakland, Critical Resistance, Workers World Party and the War Resisters League, stated: “While Urban Shield is just one front in the fight against the state’s attempt to militarize every aspect of our lives — from its war-making here and abroad, to the increasing presence of police in our schools, to the systemic murder of Black and Brown people at the hands of police — stopping it would be a major victory against growing militarization, from Oakland to Ferguson to Baltimore.”

Urban Shield was created in the wake of Sept. 11 by the Department of Homeland Security and its business partners. Mohamed Shekh of Critical Resistance said that police use Sept. 11 as an excuse to become militarized and to spy on people. Urban Shield, he said, teaches law enforcement how to “better control and repress communities around the world.”

The event is open to teams from anywhere, including south Korea this year. In past years, teams from police or sheriff’s departments in Jacksonville, Fla.; Miami; Boston; Philadelphia; Chicago; and Dallas have participated, in addition to the French National Police and agencies from the Kingdom of Jordan, Bahrain and the settler state of Israel.