Organizers from the Little Traverse Bay Bands of Odawa Indians were among Native-American and environmental activists who took to the waters under the Mackinac Bridge over Labor Day weekend.

The activists were protesting Enbridge Inc.’s two 62-year-old oil pipelines running under the Straits of Mackinac, where Lake Huron and Lake Michigan meet and the state is divided into the Lower and Upper Peninsulas. Connecting the peninsulas over the Straits is the Mackinac Bridge, a five-mile-long suspension bridge. 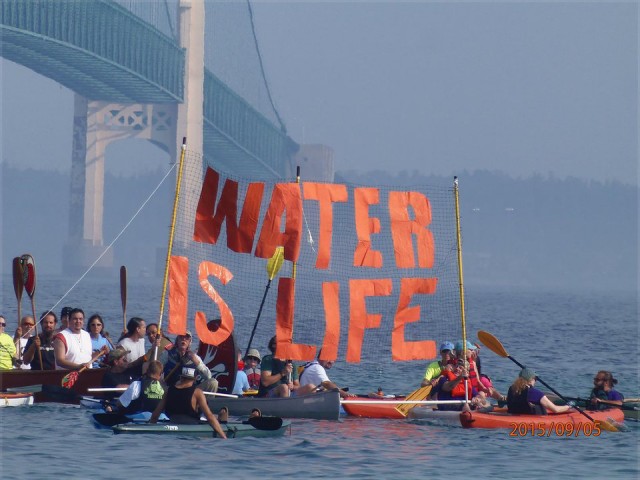 Starting originally as a single day event, the protest ended up as a two-day demonstration with a “kayaktivist” flotilla on Sunday, Sept. 6, followed by participation in the annual Labor Day Bridge Walk, which involves some 40,000 people. Both protests included banners, T-shirts and signs displaying demands to shut down what is known as Enbridge’s Line 5. The large banners included the slogans “Shut down Line 5” and “Water is life.”

The LTBB of Odawa Indians are a federally recognized tribe under Public Law 103-324 and, according to the Treaty of Washington of 1836 (7 Stat. 491) and the Treaty of Detroit of 1855 (11 Stat. 621), are ceded as protectors of our Lakehead Systems and the surrounding bodies of fresh water where Enbridge’s Line 5 is being used to transport crude[1]. If a spill were to occur, the LTBB of Odawa Indians’ territory would be contaminated beyond restoration — putting an end to the Odawa’s current way of life.

Line 5 is an environmental threat to Michigan’s Great Lakes when used to transport crude oil of any kind. Enbridge is responsible for spilling over 6.8 million gallons of oil into our environment[2]. This includes the Line 6B catastrophe in 2010 that devastated the Kalamazoo River — with diluted bitumen being one of the many toxic compounds found in the spill[3]. This disaster sparked the Odawa Tribe’s justification for shutting down Line 5, as outlined in Tribal Resolution #030515-01[2].

Enbridge jeopardizes not only the LTBB’s lifeline to freshwater, but the rest of Michigan’s Great Lakes community is endangered as well[4]. Our freshwater is a shared resource, according to the easement and agreements made under Act 10, P.A. 1953 — Great Lakes Submerged Lands Act and public trust law[3]. Therefore, any entity putting our public resources at risk is not only in violation of the GLSLA; they are also violating Tribal land agreements made between Indigenous populations and respective governments.

This lack of accountability and public oversight into corporations that exploit our shared commons is not a surprise considering today’s neoliberal capitalist environment[5]. Corporations are allowed to undermine both state and federal laws to maximize their profits. And it is because of corporate entities like Enbridge that Treaty lands are being exploited with little to no respect for the sovereignty of Indigenous tribes.

Jeremy Royer is a Blackfoot Indigenous-Aboriginal activist who took part in the action in the Straits of Mackinac. He is a Detroit resident and member of the Moratorium NOW! Coalition to Stop Foreclosures, Evictions & Utility Shutoffs.