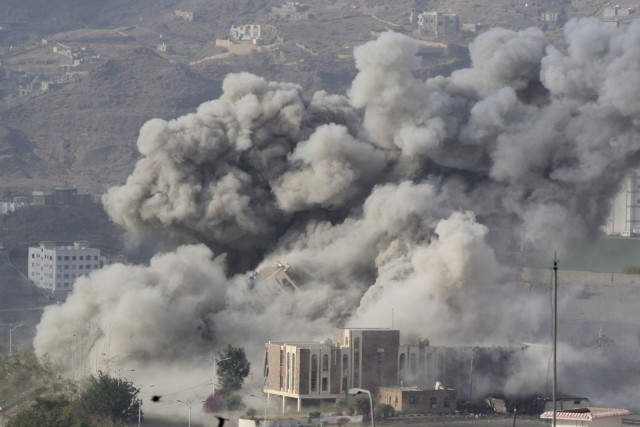 A coalition of Washington-backed armies led by Saudi Arabia and the Gulf Cooperation Council has escalated bombing raids on civilian areas in Yemen.

Neighborhoods, hospitals, mosques, factories, ports and other locations were hit during the last week. Dozens of people were killed in the airstrikes, which are becoming more vicious in the aftermath of the deaths of more than 50 troops operating on the ground from the United Arab Emirates (UAE).

At least 4,000 people have been killed and tens of thousands injured since the beginning of the Saudi-GCC air war against Yemen. Four million Yemeni people have been forced to leave their homes, while humanitarian assistance is almost impossible in light of the lack of security as well as the destruction of transport facilities and ports.

A leading news story in the New York Times on Sept. 13 exposed a war that has been largely hidden from the public view in the United States. The British Broadcasting Corporation on Sept. 11 featured a detailed report on the bombing of a bottled water factory, which U.S.-backed forces claimed was a munitions production facility.

Taking a camera crew to the destroyed plant, located in an arid region of the country, Gabriel Gatehouse, a journalist for the BBC, reported there was no indication that any capability for the manufacture of bombs existed at the location. British warplanes and bombs are being utilized in the airstrikes along with those supplied by the Pentagon and manufactured by the U.S. defense industry.

This report potentially brought to hundreds of millions in Europe and internationally the scale of the war being directed against the people of Yemen under the guise of fighting the Ansarullah Movement (Houthis), who the West claims is being supported by the Islamic Republic of Iran. The Ansarullah are a Shiite-led movement, which has allied itself with the supporters of the former government of Abdullah Ali Saleh, who left office amid massive protest during the early months of 2011.

The Times article, written by Kareem Fahim, begins with a glimpse of the proprietor of the plant: “Standing among the strewn bottles, smoldering boxes and pulverized machines a few days after the airstrike here, the owner, Ibrahim al-Razoom, searched in vain for any possible reason that warplanes from a Saudi-led military coalition would have attacked the place. Nothing in the ruins suggested the factory was used for making bombs, as a coalition spokesman had claimed. And it was far from any military facility that would explain the strike as a tragic mistake: For miles around, there was nothing but desert scrub. ’It never occurred to me that this would be hit,’ Mr. Razoom said.”

The article noted that “rather than turning more Yemenis against the Houthis, though, the strikes are crystallizing anger in parts of the country against Saudi Arabia and its partners, including the United States. The Obama administration has provided military intelligence and logistical assistance to the coalition, and American weapons have been widely used in the air campaign. Human Rights Watch has found American-manufactured cluster munitions in the fields of Yemeni farmers. Near the site of airstrikes that killed 11 people in a mosque, researchers with Amnesty International saw an unexploded, 1,000-pound American bomb. The United States is finalizing a deal to provide more weapons to Saudi Arabia, including missiles for its F-15 fighter jets.”

Ansarullah fighters took control of the capital, Sanaa, a year ago and extended their influence as far south as the port city of Aden. A relentless bombing operation since March 26 utilizing U.S. fighter jets, bombs, intelligence coordination and refueling technology has destroyed large swaths of Yemeni territory.

The intervention of ground forces from Saudi Arabia, the UAE and possibly other allied states has driven the Ansarullah out of Aden and other southern cities. Clashes in the central region of the country have caused a spike in casualties, along with the bombing of residential areas in Sanaa, destroying areas surrounding the university campus as well as historic sites in the Old City.

Although the BBC is a state-owned media outlet, its views often reflect those of the British ruling class and their allies in the imperialist countries. Typically the network’s coverage of developments in the Middle East, Africa and Asia provides a rationale for the rapacious policies of the U.S. in fostering militarism, with consequent dislocation and social chaos.

The airing of such a critical report on a TV program seen across the world could awaken many in the industrialized states and the oppressed nations to the actual character of the war in Yemen. Therefore it was not surprising that a leading member of parliament launched a frontal attack on the BBC, decrying the report on the bombing of the water bottling facility.

As a featured guest on the BBC, Conservative member of parliament Daniel Kawczynski said, “I fundamentally dispute your coverage of the entire situation in Yemen. You and Newsnight are trying to peddle a completely false prospectus to the British people of the situation on the ground.” Kawczynski chairs the all-party parliamentary committee on Saudi Arabia.

Kawczynski continued, “You have an agenda against the Gulf States coalition and you want to peddle a myth that only one side is responsible for atrocities. The BBC and Newsnight are acting in a completely disgraceful way.”

Such a statement can only be perceived as a threat against the network. Investigations and firings have taken place related to reporting on previous wars, particularly the decision to intervene alongside the U.S. in Iraq during March 2003.

Such a tone by a Conservative Party official illustrates that the dominant group in the British government is not prepared to debate its foreign policy in Yemen and other states in the region. The defense of the Gulf monarchies in a proxy war, waged by the Pentagon and White House against the poorest country in the Middle East, speaks volumes about the political character of the West’s posture toward Yemen.

Inside the U.S. there is almost no information in the corporate media about the war against Yemen, despite the central role being played by the Obama administration. The issue has not been raised at all during the course of the debates and statements made in association with the 2016 presidential campaign by either political party.

These issues must be raised by the antiwar and social justice movements in the U.S. and Western Europe. Imperialist foreign policy toward the Middle East has yielded death and destruction from the streets of Iraq, Syria, Libya and Yemen to the Mediterranean Sea, right into Southern and Eastern Europe.

Resources utilized to conduct these wars of regime change and genocide not only drain resources from the workers and oppressed in the imperialist states, but also heighten the use of repressive measures inside these industrialized countries. As the world has seen in Ferguson, Baltimore, New York and other cities, mass demonstrations against national oppression, racism and political repression have been met with police violence and mass incarceration.