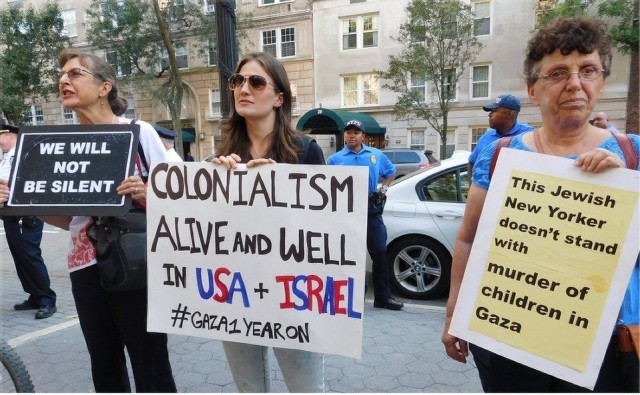 New York — For seven weeks last summer, Israeli missiles, warplanes and ground troops assaulted the small Palestinian enclave of Gaza. This Aug. 26 was the first anniversary of the ceasefire that ended the slaughter. It was marked by a march through the streets of midtown Manhattan by 150 people who chanted “Resistance is justified when a people are occupied!”

Led by the organization Jewish Voice for Peace, the demonstrators first gathered in front of the Museum of Natural History and then walked a mile through city streets to get out their message, with cries of “Remember and honor Palestine!” The Green Party, Workers World Party and others joined this protest as speakers condemned the killing of 2,300 Palestinians in Gaza and the wounding of nearly 11,000 more, one third of whom were children. The Israeli blitz destroyed 12,000 Palestinian homes and ruined much of the infrastructure in the crowded area where nearly 2 million Palestinians have been forced to live.

Holding colorful signs and banners, they insisted that Washington “End U.S. aid to Israel! What happened is a travesty!” As of 2013, Israel had received a total of $130 billion in aid from the U.S. government, more than half of it direct military aid. (Washington Report on Middle East Affairs) Speakers also pledged their solidarity with the Black Lives Matter movement.