Detroit — The ugly face of banker-imposed austerity takes many forms. The world has watched in horror as the residents of Detroit, a city whose population is majority African-American, have been deprived of basic necessities such as housing, water and quality education. Last year, two United Nations rapporteurs concluded from their investigation that the mass water shutoffs constituted a human rights violation.

What is not well-publicized is a public safety crisis, affecting many poor neighborhoods but not touching the downtown and midtown areas targeted for gentrification. The city has miles of broken street lights. Not only on side streets but on major thoroughfares there are wide areas — where people of all generations walk, bicycle, drive, catch buses and maneuver their wheelchairs — that are pitch dark when the sun goes down.

The privately operated Public Lighting Authority originally planned to repair or replace only 10,000 of the 53,000 lights that have been out of service, reducing the total number of street lights from 88,000 to 45,000. 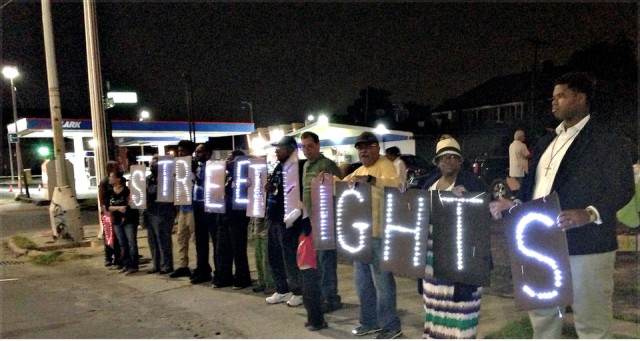 But this crime of racist neglect has not gone unchallenged. Since June 5, the Dexter/Waverly intersection has been the scene of weekly “Light Walks.” Every Thursday at 9:00 p.m., people have turned out with flashlights and signs, chanting “No lights! It ain’t right!” Sometimes they hold the illuminated letters of the Detroit Light Brigade, flashing a simple message: “Turn on the lights.” Neighborhood children, with and without their parents, come every week. Due to complaints and protests from the people of Detroit, an additional 20,000 lights will be replaced, bringing the total to 65,000.

Protestors were skeptical of the promise made by Mayor Mike Duggan to Light Walk organizer Cynthia Johnson that busy Dexter Avenue would be lit up by the end of August. But in fact on Aug. 27, Light Walkers witnessed the power of protest. When they arrived for another Thursday night action to demand basic public safety, they were nearly blinded by the brightness of brand new street lights on shiny new metal poles. Workers installing the lights had revealed that they were reassigned from other neighborhoods to Dexter Avenue “because of the Light Walks over there.”

Neighbors walked and bicycled over to the protest site to express their elation and gratitude. Now they can get around safely, without fear of being hit by a vehicle or victimized by crimes of survival.

Light Walk organizers will now target another unlit area — and another and another — until the entire city emerges from darkness.