Houston — The Intensive Supervision Appearance Program was pressured into halting, at least for now, the deportation of Houston activist, artist and father Izzy Torres on Aug. 26.

Torres was accompanied by dozens of supporters, known informally as “Team Izzy,” as he reported for deportation. They were told not to enter the office building but did anyhow. The security officer for the office building said we would disrupt business, but things were quiet and the hallways empty except for Team Izzy. 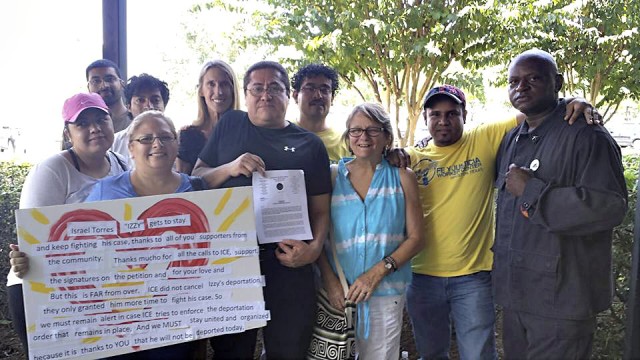 Cheers went up about 30 minutes later as Torres emerged from the ISAP offices with a broad smile on his face. “I’m not going anywhere,” he said.

Although his stay of deportation was not approved, he was given more time to prove his case and this was a victory. The group gathered on the front sidewalk and cheered and hugged Torres, and the media did their interviews. “This was a victory for the family and supporters of Izzy whose mantra is, ‘Not One More Deportation!’” declared Hope Sanford, one of the leaders of the group aiming to stop today’s deportation.

In 2013, Israel “Izzy” Méndez Torres applied for a special work permit required for his job as a bartender at a local club. Since he was an undocumented worker, he applied using a false Social Security card. Unfortunately, he was caught and detained for months by Immigration and Customs Enforcement agents and since then has been fighting his deportation.

Torres is a father of three teenagers who are U.S. citizens and a stepdad to two daughters. He has lived in the U.S. for more than 23 years. While he was detained, his family suffered great losses, including having their bills pile up without his income.

Torres was granted a stay of removal last year after the community turned out in large numbers to support him. This year the local ICE field office denied his stay and told him he had to leave his family.

“Many Houston community leaders believe Israel [Torres] is being punished for his activism. Israel has lost thousands of dollars fighting his case and then was told to buy his own ticket and ‘self-deport’ for having made a choice many immigrant workers have to make every day: to work with a fake Social Security number,” said Sanford.

“We thank all the organizations who have come out to support Izzy: the Fe y Justicia Workers Center, FIEL (Familias Inmigrantes y Estudiantes en Lucha), La Tuya, Ivan Sanchez in the office of Congresswoman Shelia Jackson Lee and others.

“Izzy has been fighting for his freedom for two years — the freedom to permanently be with his family, the freedom to live disconnected from any ankle monitor, the freedom to work and live without knowing that at any moment, the Migra can grab and deport him,” Sanford concluded.

The agency that Torres reported to, ISAP, is part of the GEO Group Inc. According to its corporate website, GEO is the world’s leading firm providing correctional, detention and community re-entry services with 98 facilities, approximately 78,500 beds and 18,000 employees around the world. They squeeze profits from immigration detention prisons throughout the United States, the world’s leader in imprisoning people.