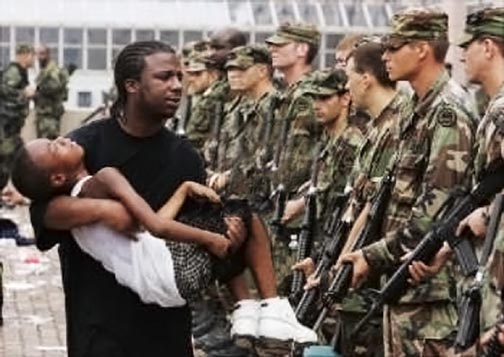 It has been a decade since the people of New Orleans and the Gulf Coast were dislocated due to the federal government’s failure to protect their communities and rebuild them after Hurricane Katrina.

Approximately 1,800 people died in New Orleans alone during the hurricane — which struck during the last week of August 2005 — and in its aftermath.  Many others suffered severe injuries, while the area’s municipal and health care systems were overwhelmed.

The storm and flooding damaged thousands of homes, causing people to take refuge on roofs of buildings and in New Orleans’ streets.  Mass evacuations took place, sending people to convention centers and stadiums, as well as to other towns, cities and states.  Later, people were transported out of the Gulf Coast region in Louisiana, Mississippi and Alabama.

Families, neighborhoods, churches, organizations, schools, social clubs and a centuries-long culture were eradicated in a matter of days. Although then President George W. Bush told the media that the federal government was working to provide assistance to the impacted cities, towns and rural areas, these falsehoods were soon exposed.

The Katrina disaster’s aftermath exposed the Bush administration for its domestic and international failures. Much of the resources of the federal government were employed in the U.S. war of aggression against Iraq.

The U.S.-led wars in Iraq and Afghanistan resulted in the deaths of thousands of U.S. and NATO troops and hundreds of thousands of civilians in these countries. Nonetheless, the Bush administration and Congress were determined to continue these occupations, which were based on fabricated allegations of destroying “weapons of mass destruction” and fighting a “war on terrorism.”

The Federal Emergency Management Agency demonstrated its racist character and administrative incompetence. The images of hundreds of thousands of dislocated African Americans in public areas and on buses and warships awaiting removal illustrated the national oppression and class inequality in the world’s richest capitalist country.

When Cuba and Venezuela offered material assistance to the people of the region, the Bush administration declined, saying that the U.S. could take care of its own people. More than 1,000 Cuban physicians were prepared to deploy to the Gulf. Venezuela was willing to send ships with fuel in a gesture of solidarity with African Americans and others in the region.

Therefore, by not providing assistance to the people and preventing other countries from doing so, the government was actually intensifying a war against the oppressed. Over the next few years, the U.S. economic crisis  mounted as soaring jobless rates and home foreclosures and evictions hit many people in oppressed communities hard.

More than 1 million people were forced to relocate, as untold numbers perished and suffered from even deeper levels of poverty and social neglect after the hurricane. African-American communities along the Gulf Coast in Louisiana, Mississippi and Alabama were disproportionately impacted.

The damage done to New Orleans’ Eighth and Ninth Wards provided a rationale for mass removals of their inhabitants. Public housing complexes were shuttered, while neighborhood residents were not given any assistance to relocate and rebuild.

Thousands of people were placed in makeshift government housing where they suffered further injury and isolation. In cities as far away as Detroit, dislocated African Americans and others were warehoused in hotels for months until the government stopped housing them. After 10 years, most dislocated African Americans are still living outside Louisiana and the Gulf region with no prospects of returning home.

Whole neighborhoods remain in ruins with damaged homes, churches, schools and businesses that cannot reopen.  The New Orleans public schools were turned over to a charter system, leaving teachers and other educational workers unemployed.

The Aug. 30 German newspaper Deutsche Welle told of Meghan Sullivan, an ultrasound technician now living in Houston, whose family could not afford to return to New Orleans. “We had to evacuate quite suddenly and leave everything behind that didn’t fit in the car. We didn’t realize it was going to be this bad, but we lost everything in the storm.”

Sullivan continued: “A year later, we decided to move to Houston. We were pretty much priced out of buying a new home in New Orleans at that point already. There simply weren’t enough properties around. And now, people who have never lived in New Orleans before are spending insane amounts of money to buy tiny condos and miserable plots of land, while no one knows how long it will take until the next natural disaster hits the city.”

Rebuilding without the Black masses

Corporate news media report that “a rebirth of New Orleans” is taking place — but that’s with white domination of the political structures and the further oppression of African Americans.

Whereas assistance was made available through grants and insurance company payouts for those impacted by the hurricane in white neighborhoods, that was not true in African-American communities. Many in the Ninth Ward were falsely told that if they lived near the levee they did not need insurance, and that the federal government would cover their expenses if a disaster occurred.

Meanwhile, thousands of African Americans in the Ninth Ward were  refused flood insurance or could not afford the premiums. So, they were left without resources to relocate or reconstruct damaged and destroyed homes and communities.

In the Aug. 28 Deutsche Welle, Richard Walker interviewed Cashauna Hill, executive director of the Greater New Orleans Fair Housing Action Center. Hill explained, “Our counselors began to notice that white homeowners in white neighborhoods were slated to receive larger grants than those for Black homeowners in African-American neighborhoods — even when their homes were of similar age and similar square footage.”

Allocation of grants was not based on reconstruction costs, but on the residence’s market value before Katrina hit. However, this formula must always take into account the racist history of how housing values are determined for insurance and real estate assessment purposes.

Rents have soared in the last decade and low-income African Americans have been largely priced out of the market. Landlords often discriminate against people who are allocated housing vouchers as opposed to those who pay cash.

These developments in New Orleans and along the Gulf Coast have been replicated throughout the U.S. The late 2000s’ “subprime” mortgage crisis had the same impact in Detroit, Cleveland, Chicago, Los Angeles, Baltimore, Atlanta, Boston and elsewhere.

Despite the fines paid to the federal government by the banks which engineered the housing crisis, most monies have not reached people adversely impacted by the dislocations that were not directly caused by a natural disaster. Until housing is a guaranteed human right in the U.S., this problem will only worsen in the future.