On Saturday morning, Aug. 22, the organization “We are all Dominicans” held a protest at the Dominican Republic Consulate in New York City’s Times Square to demand “No deportations, here or there!”

Some Haitians and progressive North Americans, as well as Dominican workers, participated in the protest.

In 2013, a Dominican court moved to strip citizenship from hundreds of thousands of Dominicans of Haitian descent, covering those born in the Dominican Republic as far back as 1929. Since then, the government has instituted a staggered program of deportations, a few at a time. Racist vigilante groups, using intimidation and violence, have been “encouraging” more people to self-deport.

Hundreds of thousands of Haitians who went to the DR more recently to do low-paid cane cutting and construction work are likewise under attack. 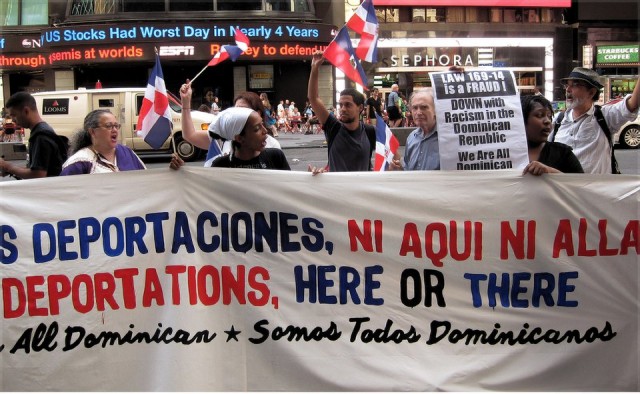 “We are all Dominicans” has been active in the Dominican community in the United States in raising the issue of racism and keeping pressure on the government of the DR.

The Coalition for Human Rights in the Dominican Republic, organized by Haitian militants in the U.S., had held a march from Grand Army Plaza in Brooklyn to City Hall on Aug. 14. That is the anniversary of “Bois Caiman,” the clandestine meeting that touched off the Haitian Revolution in 1791.

The Haitian march, which drew support from progressive Dominicans as well as North Americans, not only raised the issue of racism in the DR but also brought up the inadequate response of the Haitian government.

On Aug. 17, thousands of Haitians demonstrated at the Haitian Embassy in Santo Domingo, the capital of the DR, to demand identification documents that the Dominican government requires for residency permits. They had paid a processing fee of $22 — a lot of money for a cane cutter or construction worker in the DR — but the embassy had failed to produce the papers.

According to the Dominican Interior Ministry, only 7.2 percent of the foreign residents in the DR had been given residency permits, called carnets, as of the first week of August.

The Unión de Trabajadores Cañeros de los Bateyes (UTC) called the demonstration at the Haitian Embassy, as well as an earlier one of 15,000 sugarcane cutters outside the Presidential Palace in Santo Domingo, to demand residency permits.

The UTC is an independent labor organization founded by cane cutters from Haiti. (Haïti-Liberté, Aug. 19-25)

Pressure is growing both in the DR and in Haiti to resolve this issue before it becomes a major catastrophe. The U.S. government obviously has a lot of influence over what happens in the DR, but has remained silent.