Demonstrators marched from the United Nations to the Saudi U.N. Mission on Aug. 21 to protest the kingdom’s persecution of Shia Muslims and its refusal to allow the rebuilding of Islamic graves and holy sites it has destroyed.

They demanded the release of imprisoned Shia community leader Ayatollah al-Nimr and an end to the detention and torture of pilgrims visiting the destroyed sites. The march also condemned the Saudi kingdom’s bombing of the people of Yemen and funding of terrorist violence in Syria. Saudi airstrikes have killed thousands of Yemenis since March. 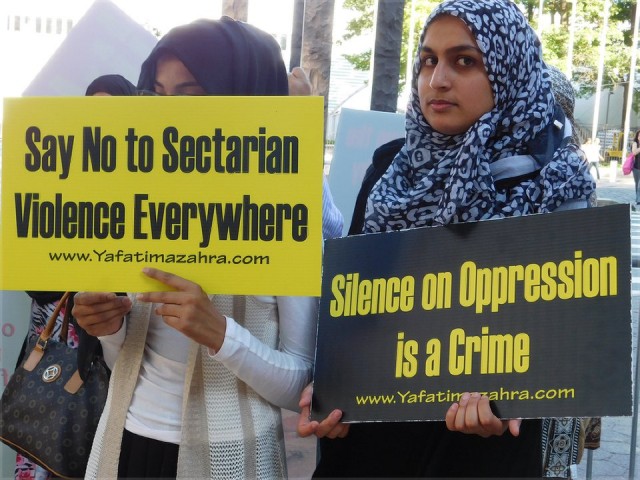 Saudi Arabia and Israel are Washington’s two main allies in the Middle East.

In the 1920s, with British support, the Saudi family used terror, force and massacre to seize control of most of the Arabian peninsula. It persecuted and murdered Muslims who did not accept the puritanical ideology of Wahabism, which it used to justify its rule.

Thousands were hanged from trees in the holy cities of Mecca and Medina. On April 21, 1925, King Ibn Saud demolished mausoleums in Jannat ul Baqi, where relatives and companions of the Prophet Muhammad are buried. Also destroyed were the tombs of his mother, Bibi Amina; his wife, Bibi Khadijah; his grandfather, Abu Talib; and his uncle, Abu Talib. That day is commemorated by Shia Muslims around the world as the Day of Sorrow.

Saudi “puritanism” did not stop the royal despots from turning over Arabia’s vast oil reserves to the Arabian American Oil Company (ARAMCO), controlled by a very non-Islamic dynasty, the Rockefellers. Nor does it stop Saudi royals from today making huge indirect investments in the racist state of Israel.

In the 1970s, ARAMCO was in theory taken over by the house of Saud. But in an agreement engineered by Henry Kissinger, it continues to pay tribute to Wall Street and the military-industrial complex, subsidizing U.S. banks and arms companies with hundreds of billions of dollars. ARAMCO supplies ExxonMobil with oil at below market prices and U.S. executives still sit on its board.

Israel’s 1967 and 1973 wars against Arab nationalist forces likely saved the Saudi monarchy. In 1982, Ronald Reagan pledged to never allow the Saudi dynasty to be overthrown. The Saudis obligingly funded the CIA’s covert wars against Nicaragua and Afghanistan.

Today, Saudi money funds Washington’s covert war in Syria and the Saudi military rains U.S.-made missiles and bombs down on the impoverished land of Yemen. The Saudi military also intervened to suppress the movement for democracy in neighboring Bahrain, where the U.S. Fifth Fleet is based.