The rightist regime in Kiev, Ukraine, carried out overnight shelling of Donetsk city and threatened an imminent new military offensive by Ukrainian troops. Despite this, thousands of people in Donetsk city rallied Aug. 24 to demand that the Kiev regime, headed by President Peter Poroshenko, stop the war against the independent Donetsk and Lugansk People’s Republics of the Donbass region. 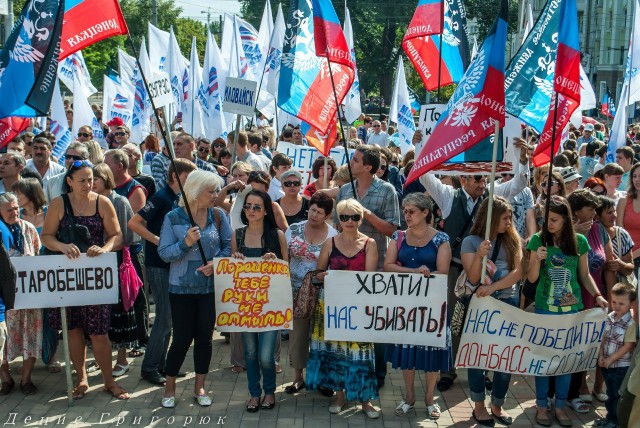 The anti-war protest, titled “Ukraine’s Dependence Day,” was a rejoinder to the jingoistic independence day celebrations organized in Ukraine by the junta of oligarchs, neoliberal politicians and fascists. This grouping took power with U.S.-European Union backing in February 2014. The far-right regime has been dependent on Western economic and military support ever since.

On the same date — Aug. 24 — in 1991, pro-capitalist and nationalist forces in Ukraine had declared “independence” from the Soviet Union. This year, a social media call for a flashmob in central Donetsk brought young and old into the streets. They marched from the statue of Taras Shevchenko, an 18th-century Ukrainian nationalist figure, to the statue of V.I. Lenin, leader of the revolution that established the first modern, multinational Ukrainian state as part of the Union of Soviet Socialist Republics.

They carried flags of the Donetsk republic and signs reading, “Poroshenko — puppet in the U.S. show,” “You’ve already perished, Ukraine” (a reference to Kiev’s national anthem), and “Stop the war, bloody President Poroshenko.” (From online reports by Denis Grigoryuk and Novorossia Today)

The human rights ombudsman of the Donetsk People’s Republic reported that 23 civilians were killed and 32 injured in shelling by Ukrainian troops from Aug. 15 to Aug. 21. Some 17 people were killed and 45 wounded in the prior week. (Novorossia Today, Aug. 24)

The death toll has grown steadily over the summer. Sporadic Ukrainian shelling, which has claimed a few lives each week, has intensified. Attacks in the Lugansk People’s Republic have also increased, especially near villages under the protection of the Ghost Brigade anti-fascist militia.

According to the United Nations, nearly 7,000 people have been killed since the start of Kiev’s “Anti-Terrorist Operation” in the spring of 2014.

There is no doubt now that Kiev’s army and volunteer neofascist battalions are preparing a new offensive. Poroshenko boasts of sending more troops and weaponry to the front — obtained directly or indirectly through the U.S. and other NATO powers. The anti-fascist militias that defend the Donbass republics have reported a steady buildup of Ukrainian troops for months.

According to this information — which confirms what the militias have observed on the ground — Ukraine now has, on or near the front line, more than 90,000 troops; 450 tanks; more than 2,500 armored personnel carriers; five mobile rocket launcher complexes; 230 multiple launch rocket systems; over 1,000 artillery guns and mortars; and more than 3,500 anti-tank weapons. (Col. Cassad blog, Aug. 21)

The planned Ukrainian offensive is said to be modeled on the Croatian assault that defeated Serbian forces in Krajina during the Yugoslavian civil war, also masterminded and manipulated by U.S. and German imperialism. It resulted in the deaths of thousands of Serbs and drove the entire Serb population out of Krajina.

Attacking from several directions simultaneously, Kiev’s forces hope to reach Donetsk’s eastern border with Russia, preventing any military or humanitarian support from reaching the resistance, and blocking Lugansk militia forces from coming to their aid. (For maps and in-depth information in English, see RedStarOverDonbass.blogspot.com.)

However, military analyst Col. Cassad points out that in Krajina, Croatian forces outnumbered Serbian troops by 10 to one. Ukraine, he notes, has not even twice the number of troops as the Donbass republics.

Since the troops drafted into Kiev’s army are unwilling fighters, the Donbass republics have resoundingly defeated previous Ukrainian offensives.

The military buildup by Ukraine is a direct violation of the Minsk 2 ceasefire agreement it signed in February with Russia, Germany and France. Even after the Donbass republics unilaterally withdrew heavy weaponry from the contact line, Kiev refused to budge.

An intervention by U.S. officials to force Kiev to pass legislation required by the Minsk accords in June led to speculation that Washington might try to tamp down the war. Now it appears, however, to have been another figleaf to cover Pentagon and NATO training and arming of the Ukrainian military, while giving the Kiev regime more time to build up its offensive forces.

As Workers World reported previously, the war in Donbass is a step in a long-term U.S. effort to undermine the existence of an independent Russian Federation, even though it is now capitalist. This policy, pursued by Republican and Democratic administrations for more than 20 years, may take tactical twists and turns, but there are no signs that Washington and Wall Street plan to fundamentally change course. (See “Ukraine, Donbass and the New Cold War against Russia” in Workers World, July 31)

What the Obama administration, congressional leaders and the Pentagon have done is to strengthen U.S. control over the disparate, competing factions of the Kiev regime. These factions are united mainly by their hatred of Russia and the people of Donbass.

Earlier this summer, the Right Sector fascist group repeatedly threatened to overthrow Poroshenko. In late August, this group’s leaders suddenly announced on social media that some of their squads would be integrated into the Security Service of Ukraine (SBU) — the Ukrainian political police similar to the FBI.

Right Sector members will be put on the government payroll, issued “official” weapons and have the legal cover of the SBU.

The integration of Right Sector into the state apparatus came shortly after statements by the U.S. ambassador and other officials defending Poroshenko from the most recent flare-up between the rival factions. (Col. Cassad blog, Aug. 22) It fits a pattern that has seen neo-Nazi contingents like the Azov Battalion integrated into the Ukrainian military structure and trained by U.S. troops.

Add these developments to the International Monetary Fund’s declaration that it will continue to bail out Kiev, even if the bankrupt regime defaults on its loans. Meanwhile, the regime pours money into the war and imposes ever greater austerity measures and repression on the working people of Ukraine.

The message is clear: U.S. imperialism wants the war in Donbass to continue at all costs. Washington is determined to use Ukraine to wear down the People’s Republics and Russia and doesn’t care how many people on both sides are killed in the process.

But, as Donetsk residents showed with their protest on Aug. 24, the people of Donbass are prepared and determined to resist.