Aug. 25 — Once more, the U.S. imperialists have threatened the Democratic People’s Republic of Korea with the Pentagon’s formidable war machine, carrying out annual “war games” from the territory of south Korea. Imperialism’s warships and planes simulated an attack on the northern part of the Korean peninsula beginning Aug. 17. The war practices are scheduled to run to Aug. 28. 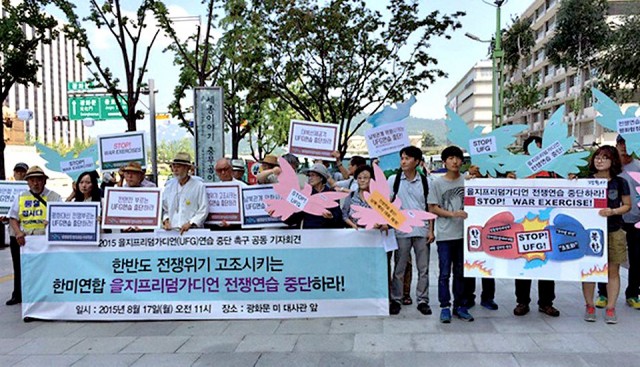 And once more, the people and leaders of the DPRK have shown that they will not be intimidated by this kind of saber-rattling.

According to the U.S. military publication Stars and Stripes of Aug. 17, some 30,000 U.S. and 50,000 south Korean troops were mobilized for the “war games,” which the U.S. had the gall to describe as “non-provocative.”

Having 80,000 combat forces practice war against their country, and the DPRK is supposed to just take it lying down?

Such a claim of innocence is preposterous, especially given the horrible and tragic history of the 1950-53 U.S. war against the Korean people, in which the Pentagon tried to completely obliterate the socialist north. Only the most craven apologists for imperialism — read almost the entire U.S. corporate media establishment — could swallow such a lie and then regurgitate it to the public.

Certainly the DPRK took it seriously.

The current president in south Korea is Park Geun-hye, daughter of Gen. Park Chung-hee, a military dictator who ruled the south from 1961 to 1979, after seizing power in a coup with U.S. blessing.

There is widespread opposition in the south to the right-wing grouping now in power. This could be seen last year when protests erupted over the role of government corruption in the unsafe conditions on a passenger ferry that sank, killing 304 people, most of them high school students.

The reactionary government in Seoul, which is totally subservient to the dictates of the U.S. and its continued military occupation of southern Korea, prepared for the “war games” by planting huge banks of loudspeakers on the edge of the demilitarized zone (DMZ) that separates the two halves of the Korean nation and started blasting hostile and insulting propaganda toward the north.

‘An open act of war’

The DPRK reacted by calling an emergency enlarged meeting of the Central Military Commission of the Workers’ Party of Korea — the political party that has led the DPRK since 1946.

A press release from the country’s U.N. mission issued Aug. 21 read: “Psychological warfare against the DPRK is, in essence, an open act of war against it. In this regard, the General Staff of the Korean People’s Army on Aug. 20 sent an ultimatum to the south Korean puppet Ministry of Defense that a strong military action would be launched at once unless it stops the anti-DPRK broadcasting for psychological warfare and removes all psywar means within 48 hours. …

“The meeting discussed the measures to convert the party and power bodies, working people’s organizations, state security, people’s security and judicial and prosecution organs, factories, enterprises, cooperative farms and other units in the relevant areas into the semi-war system as the semi-war state has been declared in the area along the front. It also set forth the duties and tasks of officials in charge of external affairs to fully lay bare the truth about the prevailing situation caused by the enemies’ undisguised and surprise aggression.”

The people were organized and prepared in case of war. The DPRK moved troops closer to the DMZ and reoriented other defense units.

It seemed as though real war could be imminent under cover of U.S.-led “war games.”

But this strong response by the DPRK and its young leader, Kim Jong Un, brought results. Within a day a meeting was held at Panmunjom, where a building straddles the DMZ and has been used ever since the 1950s for meetings between the two sides.

As of this writing, the regime in south Korea has agreed to dismantle its offensive and provocative loudspeakers and the crisis appears to have been forestalled. But the U.S.-led war exercises are continuing and the DPRK is maintaining its vigilance.