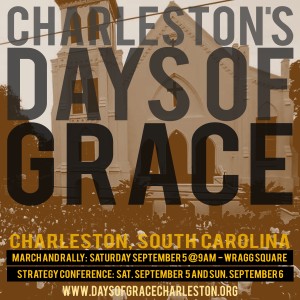 Organizing is accelerating for the “Days of Grace, Love’s Work Is Justice” events to be held in Charleston, S.C., over Labor Day weekend, Sept. 5 and 6. The event commemorates the nine Emanuel African Methodist Episcopal Church parishioners killed on June 17 by a white racist, as well as Walter Scott, killed by the police in North Charleston in early April.

It will pay a special tribute to Rev. Clementa Pinckney, the state senator and church minister who was one of those gunned down by Dylan Roof, a white supremacist. Roof had been photographed with Confederate flags and wearing the insignia of the former racist apartheid and settler colonial regimes in Rhodesia (now Zimbabwe) and the Republic of South Africa.

Roof had sat among the attendees of a bible study for one hour on June 17 before he stood up and said he had to kill African Americans because they were “assaulting white women and taking over the United States.”

The Labor Day events are being coordinated by the International Longshoremen’s Association Local 1422, which has engaged in numerous labor actions over recent years.

A statement posted on the ILA website reads: “Guns inflicted the fatal wounds of April and June, but racism, poverty and the politics of rancor and discord have long inflicted grave wounds on the State’s poor and most vulnerable people. This Labor Day, people of faith and conscience will come together in Charleston to remember our fallen friends and to reflect on the racism and hatred that lay at the root of their deaths, as well as the violence that tears away at the fabric of our communities.”

In addition to being a center in the struggle against racism, Charleston has been a focal point for a burgeoning workers’ movement led by African Americans. Since the days of slavery, the African population in South Carolina has had its labor exploited by the ruling class and has resisted injustice.

African-American workers are seeking to link the escalation in police and vigilante violence against the community with the need to rejuvenate the movement for jobs and living wages. Following the Mother Emanuel massacre, thousands demonstrated, as part of a protracted struggle, to remove the Confederate flag from the State Capitol building in Columbia, demanding that this symbol of slavery and racism be taken down.

According to Leonard Riley Jr., vice president of ILA Local 1422, “There is a feeling that the people of good will need to be heard in this moment. The removal of the Confederate flag was a hopeful sign that the state is ready to move forward. But we need to back that up with policies that make this a better state to live in for everyone.” (Charleston Post & Courier, Aug. 21)

Thousands of people from the local area and from around the U.S. are expected to travel to Charleston over this Labor Day weekend for the gathering.

On Sept. 5, a demonstration and rally will be held in downtown Charleston. The action is scheduled to start at Wragg Square and then march to Mother Emanuel and finally end in Marion Square. After the demonstration and rally, a conference will convene that afternoon beginning at 2 p.m. and will continue the following day. (daysofgracecharleston.org)

Walter Scott was gunned down April 4, the 47th anniversary of the martyrdom of Martin Luther King Jr., by white police officer Michael Slager after a traffic stop in North Charleston. Angry over this racist killing, organizers rallied the community against law-enforcement violence directed against the people.

“We have to heal and we have to do better,” Riley added. “That’s the challenge we face, and that’s the mantra of this call to action.”

Scott was stopped supposedly for a traffic violation and was shot repeatedly in the back by Slager. A Dominican worker walking through the area videotaped the killing on his cell phone, capturing a horrendous crime which is all too common on U.S. streets.

Due to the video documentation of the killing and the mass demonstrations taking place throughout the country surrounding police misconduct, the officer was arrested and charged with murder. It remains to be seen if he will actually be convicted and, if so, receives a sentence commensurate with this crime.

This Labor Day event comes amid an escalation in demonstrations and rebellions against racist violence and economic exploitation directed towards African Americans. The two largest rebellions over the last year have taken place in the southern states of Missouri — in Ferguson and St. Louis — and Maryland in Baltimore.

Ruling class forces and law-enforcement agencies are reacting to the rising militancy and intolerance for racism among African-American youth and workers. Consequently, efforts are well underway to attempt to neutralize the growing struggle to end police violence against the people.

Allegations have been made recently that the Black Lives Matter movement and other organizations have come under surveillance by the state. Such charges were made in Charleston after BLM was one of the first groups to protest against the killing of Scott and demand that his killer be arrested and prosecuted.

Black Lives Matter Charleston organizer Muhiyidin d’Baha told the Charleston City Paper that the group had to enforce “a no-cameras policy at its meetings after the Scott shooting when newcomers started showing up and snapping pictures.” (Aug. 21)

The activist stressed: “These things were definitely happening and definitely scared people away with the knowing or not knowing of who was behind these cameras and what their intention was. There was a lot of fear, and there’s still a lot of fear, among the people that need to rise up right now.”

The Charleston City Paper also reported, “Recently released emails from North Charleston city employees show that the actions of protest groups including Black Lives Matter Charleston were being monitored by the S.C. Law Enforcement Division (SLED) and the American Red Cross, both of which sent emails to city staff informing them about upcoming organizational meetings and the arrival of Ferguson, Mo., residents at a hotel in Summerville. D’Baha says he does not know if the newcomers at the meetings were working for a law enforcement agency, but the effect of their presence was palpable.”

Due to the current atmosphere prevailing in many cities throughout the U.S., law-enforcement agencies are clearly being coordinated on a national level to contain the protest.

Unrest broke out recently in the city of St. Louis after the police killed an 18-year-old African American. A heavy police presence and its use of teargas and pepper spray triggered the stoning of police and the burning of an abandoned building and a vehicle. In nearby Ferguson the first anniversary of the death of Michael Brown ignited further demonstrations and civil unrest.

Until the federal government addresses the police brutality and killings directed against African Americans and other oppressed people, these demonstrations and rebellions will likely grow and become more militant and politically directed against the state and the corporate ruling interests.