Waller County, Texas — Activists came by the hundreds to Waller County, Texas, on Aug. 9, the one-year anniversary of the murder of Michael Brown in Ferguson, Mo. They also came for Sandy Bland, who was found dead in her jail cell on July 13, and for all the victims of racist police killings whose lives have been taken so viciously and unfairly. 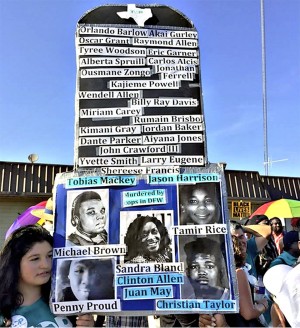 Protest in Waller County, Texas, on Aug. 9, anniversary of the murder of Michael Brown in Ferguson, Mo., and for Sandy Bland, who died on July 13.
WW photo: Gloria Rubac

This action was called by Truth2Power, a new organization whose members stressed they were there for all oppressed people. The activists’ anger matched the 105-degree heat, which, despite a heat advisory, didn’t deter the elderly or the young.

Black people, Brown people, women, and lesbian, gay, bi, trans and queer people have all been victims of police violence. The speakers represented all these communities, and all called for unity against a common oppressor.

The large rally was held in the parking lots at the Waller County Jail. They overflowed with people from Houston, Dallas, Austin, Prairie View and Hempstead, Texas. Older people sat under tents and in chairs brought for them. People came with coolers filled to the top with ice and water. Everyone shared water and umbrellas as they heard not only speakers, but from Sandy Bland herself. Her recorded words were chilling and moving.

An elderly man from Waller County, who was sitting right by the jailhouse door, told this reporter that in 1988 he was charged with 86 felonies for registering students at Prairie View A&M University to vote. That was nine years after the U.S. Supreme Court ruled in 1979 that college students could vote wherever they went to school. But Waller County was so far behind the times that this man was facing 860 years in prison just for helping students exercise their right to register to vote.

Militancy makes cops back off

After the rally ended, the National Black United Front organized the crowd to march. The block the jail compound sits on was totally encircled, much to the sheriffs’ chagrin. Then a group of protesters went in the front door and began chanting in the lobby of the jail. 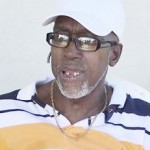 Above, a man from Waller County, told this reporter that in 1988 he was charged with 86 felonies for registering students at Prairie View A&M University to vote.

The jailers had allowed folks to go in and out all afternoon to use the restroom, but the chanting unhinged them. They formed a line and began to push the crowd out the door, causing some people to fall and others to trip over them. Tempers flared, and after a large shoving match, the doors were shut with several protesters locked inside.

When the crowd tried to break down the doors, those being held were released out the back door. They got to see the very cell that Sandy Bland occupied before she died.

A few minutes later, a parade of Texas state troopers rode into town and to the jail with lights flashing. They stopped behind the jail and emerged, putting on flak jackets and getting batons ready. The militancy of the crowd, however, discouraged the cops, and they backed off. There were no arrests and demonstrators returned home promising that the struggle was just beginning.

As the cars and buses were being loaded and troops were leaving, the elderly man who had faced 860 years in prison thanked everyone for coming, saying he hoped to see us again and again until we obtained justice for those having to live in Waller County.

On the bus back to Houston, everyone was pleased they had withstood the heat — from the cops and the weather.