A hidden history of the Civil War

Ever hear of the First Alabama Cavalry, or the name Newton Knight? Not likely. The capitalist media have always promoted stories of “former Confederate soldiers” who loyally served the Confederacy, loved Gen. Robert E. Lee, had no issue with slavery and so on. But there is another story, a hidden history, of poor white opposition to the Confederacy and to slavery. 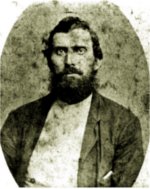 Newton Knight was a poor white farmer who fought the Confederacy with all his might. The First Alabama Cavalry was an anti-slavery pro-Union cavalry, mostly white but also Black, about 2,000 in total, whose members fought the Confederacy and eventually were escorts for Gen. Sherman during his historic march through Georgia in 1864.

By far the greatest opposition to slavery came from the enslaved themselves, who always had escape in mind, aided both the Union army and Confederate deserters, fought for the right to fight the Confederacy, and heroically struggled for their freedom at every turn. But there was also significant opposition to the Confederacy from poor whites in every slave state.

There is no better example than Knight, the leader of a guerilla group that fought the Confederacy and declared the “Free State of Jones” in Jones County, Miss. In 1921, Knight, aged 84 and living in obscurity, called on Meigs Frost, a reporter for the New Orleans Item, to tell his story and “get the true facts about Jones County during the war.” His life story was recorded in “The State of Jones” by Sally Jefferson and John Stauffer. (Doubleday, 2009)

Mississippi, a land of large plantations and small farms, was the largest cotton-producing state in the South — cotton produced by the backbreaking forced labor of enslaved Africans. It was a land of rich, slave-owning aristocrats, 500,000 enslaved people, and poor white farmers.

Jones County contained some of the poorest soil and poorest farmers in the state. It also had no sympathy for the slave owners. In 1861, the vote in Jones County was overwhelmingly for the anti-secession candidate. But the delegates in Jackson, Miss., represented only the powerful, not the popular, and Mississippi was the second state to secede. Many suspected of Union sympathies were lynched. It was a reign of terror.

Knight, well known for his anti-slavery views, joined the Confederate army under threat of arrest and served as a hospital orderly, deserting soon after. He hid out in the swamps of northern Mississippi, learning what life was like for a runaway slave, and that the enslaved people aided Confederate deserters. He wasn’t captured without a fight. Manacled, flogged and taken to prison, Knight was given a choice: fight for the Confederacy or face a firing squad. But it wasn’t long after that that he deserted again, after Vicksburg, Miss., fell to the Union.

This time, Knight found company with large bands of fellow deserters and organized. According to Jefferson and Stauffer, “The Newton Knight who returned to Jones County after Vicksburg was a strike-first killer and dedicated enemy of the Confederacy.” As many as 200 in number, the former soldiers elected Knight their captain, calling themselves “The Jones County Scouts,” and declared independence from the Confederacy.

It didn’t take long for the Scouts to make a name for themselves, raiding Confederate supply convoys, distributing food to destitute families and helping to free any enslaved people that they could. For example, once the guerilla band seized the local Confederate conscription officer and “in broad daylight called him outside and voted on whether to hang him. He was ‘paroled’ after swearing to leave and never again enter the county.”

According to local legend, when Major Amos McLemore of the Confederate army visited Jones County in 1863 to search out deserters, Knight shot him point blank in the head with a shotgun at a local tavern. However, “no one in the room could identify the attacker.”

The Scouts had strong allies in the Black population, giving them food, ammunition, information and other supplies. There is no hard information about the composition of the guerilla army, except that “every day more blacks liberated from plantations came into the swamps to join the struggle.”

Many enslaved people risked life and limb to help, particularly Rachel, an enslaved person, who married Knight after the war. According to Jenkins and Stauffer, “They had an agreement, she would provide him with food and he would work to secure her freedom.” Knight was as good as his word. Eventually, he committed a “crime” in post-Reconstruction Mississippi by recognizing their own children and fighting for their right to attend school. Rachel and Newton were buried together outside a cemetery, because it was also “illegal” to have integrated cemeteries at the time.

The Confederacy responded with fierce repression against the guerrillas. Like the Pentagon did in Vietnam 100 years later, the slaveowners’ army tried to force them out of the swamps by torturing their families, ruining their farms, stealing their food and animals, and beating their spouses and children. An entire regiment of about 500 soldiers was sent to terrorize Jones County. Ten guerrillas were lynched, left hanging as a warning to others. But as soon as the Confederate army left to other war fronts, the Scouts reorganized. Eventually 53 scouts escaped to join the Union army.

Newton Knight must rank among the heroes of the Civil War. Thousands of poor whites throughout the South followed his example and became pro-Union. It is no accident that his story was drowned out in the mythology of the neofascist post-Reconstruction period. As false as the racist myth of the “happy” slave of Disney cartoons is the myth that every poor white farmer of the Civil War South was racist and 100-percent loyal to the Confederacy.

Due to the Civil Rights Movement, the new Black Lives Matter movement and the campaigns against the Confederate flag of slavery, the truth about the anti-slavery struggle continues to surface. According to Jenkins and Stauffer, “Newton Knight had more in common with the slaves he had met in the swamps, who treated him better and showed him more basic humanity than the Confederate authorities who claimed to be his countrymen.”