It was one year ago on July 17 that 43-year-old Eric Garner, an African-American father of six children, died of a heart attack after a white police officer, Daniel Pantaleo, put him in a chokehold while several other officers slammed his head and body to the ground on the streets of Staten Island, N.Y. Garner repeated, “I can’t breathe,” over and over before losing consciousness. 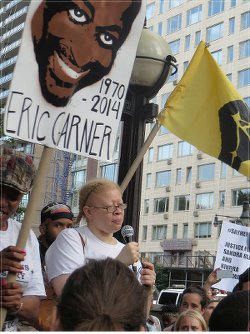 What was Garner’s “crime”? Selling loose cigarettes to support his family. This horrific murder was captured on video tape by Ramsey Orta, a Puerto Rican activist, who has been imprisoned in Rikers Island for prior charges in retaliation for bringing this video to the attention of the entire world.

A grand jury refused to indict Pantaleo for murder or for any lesser charges last November, allowing this killer cop to walk free. This travesty of justice prompted large demonstrations in New York, including die-ins during rush hour in Grand Central Station, and elsewhere around the country.

On July 13, the city of New York settled a $5.9 million claim with the Garner family to avoid a full-blown liability lawsuit. The family had originally sued the city for $75 million.

On July 17, various actions were held in Staten Island, Manhattan and Brooklyn, not only to mark the one-year anniversary but to draw attention to the ongoing epidemic of police murders of Black men and women and other people of color, including LGBTQ people.

In Manhattan, hundreds of activists gathered at Columbus Circle for a rally followed by a march to Union Square. Along the way, protesters blocked traffic at 34th Street and 7th Avenue, leading to the arrest of more than 20 activists on disorderly charges.