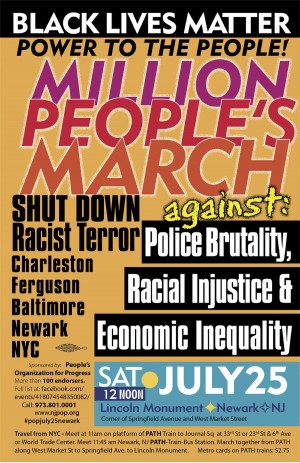 A major demonstration in Newark, N.J., on July 25 — called the Million People’s March Against Police Brutality, Racial Injustice and Economic Inequality — has gained the support of over 100 community and grassroots organizations, union locals, religious groups, political prisoners defense committees, immigrant rights, women’s and LGBTQ groups. The July 25 march was initiated by the People’s Organization for Progress,which has a long history of mobilizing mass protests against police violence.

The rally is set to gather at noon at the Lincoln Monument in Newark at the intersection of Springfield Avenue and West Market Street, across from Essex County College. After a march through downtown Newark the mass gathering is expected to end at the same location.

Lawrence Hamm, the chair of POP, described the effort this way: “The epidemic of police murders and the massacre in Charleston propel this July 25 March and the many mass outrage events. July 25 is not just one event. It is about building a movement that responds to police violence and racist murders. The families of those murdered will be the first speakers at the July 25th march.”

Hamm led several recent building actions for the event, including a United National Antiwar Coalition call with activists from 14 cities on June 30, followed by a New York City mobilizing meeting on July 7 and press conferences in Philadelphia; Camden, Montclair and Plainfield in New Jersey; and New York City. It was also raised at the annual commemoration of the 1967 Newark Rebellion at Rebellion Monument in Newark. Organizers are expecting thousands of participants.

Groups are organizing to come from far away, including a bus from Atlanta and vans and cars from Washington, D.C., Baltimore, Philadelphia, Boston, Albany, the mid-Hudson area and throughout New Jersey. In New York, Black Lives Matter activists are planning to gather on the Sixth Avenue PATH subway platforms at both 33rd and 23rd Streets at 11 a.m. on Saturday, July 25, and take the 11:05 a.m. PATH train to Journal Square and then Newark’s Penn Station.